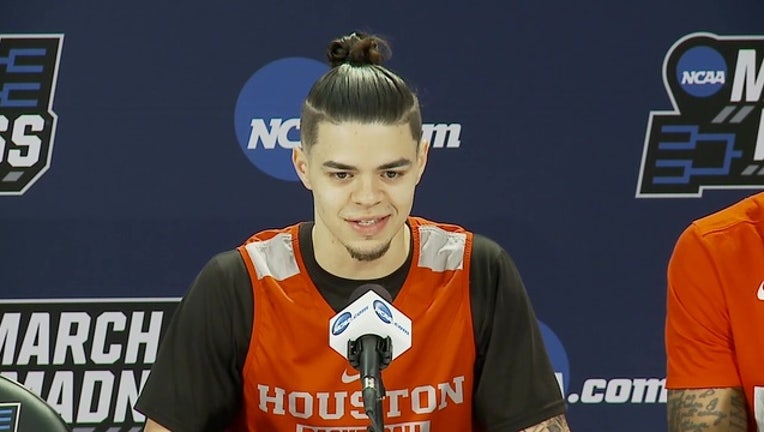 WICHITA, Kan. (AP) - Rob Gray scores a career-high 39 points including the game-winning shot with 1.1 seconds left to lead the No. 6 seed Houston Cougars past the 11th-seeded San Diego State Aztecs 67-65 to advance to the second round of the NCAA men's basketball tournament, the first win for the University of Houston since 1984.

Trey Kell's off-balance 3-pointer at the buzzer was no good.

Devin Watson had just tied the game for the Aztecs with a turnaround 3-pointer, his second in a matter of seconds, when Gray dribbled up floor with 29 seconds left. He allowed the clock to tick down to six seconds before crossing over, scooting under two defenders and scooping up his shot.

Devin Davis and Corey Davis Jr. added nine points apiece for Houston, which lost two players to fouls down the stretch and struggled to contain the Aztecs' big front line.

Jalen McDaniels had 18 points to lead San Diego State (22-11). Kell finished with 12 points and eight rebounds, though it's the three points he missed at the end that will stand out.

Houston will play third-seeded Michigan or No. 14 seed Montana in the West Region on Saturday.

The Cougars struggled much of the first half to deal with the Aztecs' length, especially McDaniels and Malik Pope, the 6-foot-11 forwards who effectively clogged up the paint.

Houston finally started to open things up when it began drawing fouls late in the half.

Gray did most of the damage, hitting an array of floaters and lay-ins before a 3 from about 30 feet gave the Cougars a 39-29 halftime lead. Gray finished the half with 16 points, even though he went to the bench for a short stretch with two fouls.

For long periods in the second half, the best offense for either team came at the foul line.

McDaniels went to the stripe four times in five trips for San Diego State, and Gray answered with three straight trips for Houston. That was part of a stretch in which the Cougars mustered a single field goal over more than 10 minutes, allowing the Aztecs to slowly whittle away at their deficit.

Watson finally tied the game with a deep 3-pointer with just over a minute left, only to watch Gray answer with a 3 of his own to give Houston a 65-62 lead with 39.4 seconds remaining.

Watson got the ball in his hands again, this time spinning around on the wing for a can-you-top-this 3-pointer that electrified a vocal section of fans opposite the San Diego State bench.

Turned out that Gray would top it one more time.

San Diego State had won nine straight games, including its run to the Mountain West Conference Tournament championship, before running into the Cougars. The nail-biting loss dropped the Aztecs to 1-5 in games decided by four points or fewer this season.

Houston made the most of its first NCAA Tournament trip since 2010, becoming the sixth team in school history to reach 27 wins. Now, the Cougars can aim for their 28th.

San Diego State and its fanbase heads home while the Cougars, led by coach Kelvin Sampson, turn their attention to the Michigan-Montana winner in the second round.