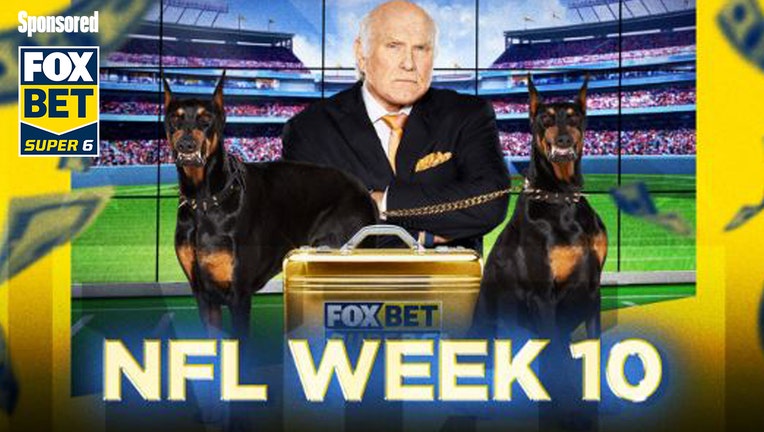 Terry Bradshaw's NFL Sunday Challenge Week 10 jackpot is $100,000. Find out how you can cash in on this huge cash prize! (FOX Sports)

Last week's big news was that we blinked and realized we were halfway through the NFL season. Time flies when you're having football.

This week's big news? Well, there's a huge Week 10 clash between the Cowboys and Packers in America's Game of the Week on FOX. All eyes will be on these iconic franchises when they take the field Sunday afternoon. We'd expect nothing less from a matchup featuring a quarterback on the mend in Dak and a quarterback at his wit's end in Rodgers.

While we're thrilled about tuning into that game, there are five other games that everyone needs to watch for a chance at Terry Bradshaw's $100,000.'

You read that right, Terry is giving away 100 grand in Week 10 of the NFL season in the FOX Bet Super 6 NFL Sunday Challenge.

FOX Bet Super 6 is a free-to-play contest where you pick the winners of all six marquee games with their margins of victory for a chance to win $100,000 in our NFL Sunday Challenge. Just download the FOX Bet Super 6 app on your phone or mobile device, make your picks and submit your selections before Sunday’s games kick off.

And since you don't have to work Friday in honor of Veterans Day, if you win 100 grand on Sunday, you can call off Monday, too. How's that for an extra long weekend?

The only way to win Terry's money is to play. Download the FOX Bet Super 6 app on your mobile device right now and get ready to play NFL Sunday Challenge. It's easy, fun, and, most importantly, it's free!

And if you need help before you make your picks, read our predictions below.

The Lions finally got that elusive second win and against the Packers, no less. However, the Bears didn't look too shabby in Week 9 either.

Chicago quarterback Justin Fields had himself a game, rushing for 178 yards — a regular-season record for a QB. Despite Justin's heroics, the Bears didn't upset Miami.

Which squad gets the win in Week 10?

Based on the odds at FOX Bet, 3-point favorite Chicago is due for a W. That sounds Bear-y good to us.

Chicago's run game will help them get past the Lions. As noted above, Fields is a huge part of that. But it's not all "See Justin Run;" it's a total team effort. In Week 9, the Bears became the only team other than the 1976 Steelers to post 225 rushing yards or more in four straight games since the beginning of the Super Bowl era.

It's also worth noting that since 2018 when the Bears are home favorites, they are 14-4 straight up (SU).

Remember, though, that the Lions are 4-4 against the spread (ATS) this year. This means they've kept contests close even when the odds were against them. But their overall record is just 2-6. That's why we're backing the Bears in a tight one.

Prediction:
Bears by 1 to 2 points

Patrick Mahomes in action is pure poetry. He has passed for 2,605 yards and 21 touchdowns, and both rank first in the league. His chemistry with top target tight end Travis Kelce on the field makes you wonder if they're besties off the field. And according to Instagram, yes.

The tough Tennessee Titans gave the Chiefs all they could handle during Monday Night Football, so it took overtime for KC to get the 20-17 win. The Chiefs should anticipate an easier road against the Jags this week.

On KC's side, Patrick Mahomes is 27-6 SU as a starter when he's a home favorite in his career. And the squad has won five straight games against the Jaguars since 2010. Lastly, in November, the Chiefs are kings, going 10-0 in their last 10 matchups in the month.

Prediction:
Chiefs by 11 to 13 points

If you're a long-time listener, you already know we back Kirk Cousins and his Vikings faster than you can say Twin City. And this weekend, with the health status of Bills QB Josh Allen in question, we're backing the Vikes again.

The Vikings' 24.1 points per game is eighth-best in the NFL. Kirk Cousins is just one passing yard shy of 2,000 through the air this season, and his 13 touchdowns are tied for ninth. Wide receiver Justin Jefferson's 115 yards in Week 9 marked his 19th game racking up 100 yards or more.

When we look at the Bills, if it weren't for Allen's questionable status, we would have given them a more serious look. They've gone 13-3 in their last 16 non-conference games, and they lead the league in total offense and scoring defense.

But if Allen doesn't suit up, Case Keenum will get the call. Keenum, by the way, is 29-35 over his career as a starting quarterback.

There's so much to love about this game because it features two of the league's most dynamic offensive players — Nick Chubb and Tyreek Hill.

Cleveland's Chubb leads the NFL with 10 rushing touchdowns. Miami's Hill leads the league in both receiving yards and touchdowns. Electric is what comes to mind when we think about these two offensive forces.

When it comes to the odds, FOX Bet gives the Dolphins a 3.5-point edge. But we're backing the Browns.

Cleveland's Myles Garrett is a sack machine. He has racked up 7.5 sacks this year, so Cleveland gets the edge defensively. And the Browns are coming off a bye. Never underestimate the power of a team coming off a rest week.

What can brown do for you? They can cover and beat the Dolphins in Miami.

Prediction:
Browns by 4 to 5 points

This is a battle between two bad teams. The 3-6 Saints are coming off a 27-13 Monday Night Football loss to the Ravens. The uncharacteristically awful Steelers at 2-6 are coming off a two-game losing streak.

And even though the Black & Gold have one less win than N.O., we like Pittsburgh in the matchup.

The Saints have the worst turnover differential in the NFL, and their 28th-ranked scoring defense is also near the bottom.

To be fair, Pittsburgh is also having a miserable year. But the Steelers are 12-7 SU as a home underdog under Mike Tomlin, and they're 11-4 SU under Tomlin following a bye.

We'll say it again — never underestimate a team's ability to come back stronger after a bye week, especially when you're talking about the Pittsburgh Steelers.

This is a big one. America's Game of the Week. Both these iconic franchises will be on their A-games.

However, the result will be the Cowboys by three touchdowns. OK, we're only partially kidding.

Have you seen how bad the Packers have looked all season? Even Skip Bayless' BFF Lil Wayne took to Twitter to express his disdain for Aaron "Everyone Else's Fault" Rodgers.

Dallas has been on a roll. The Cowboys are 6-2, they lead the NFL with 33 sacks, and they're 7-2 in their last nine games after a bye. And it hasn't mattered if it's Cooper Rush or two-time Pro Bowler Dak Prescott starting. Doesn't matter if it's Zeke eating or Tony Pollard carrying the rock. The Cowboys are on fire.

On the other hand, the Packers probably want to set fire to their season.

America's Game of the Week will be the biggest stage in the league this weekend. And Dallas has the edge in this game on offense, defense and on the strength of the momentum they're riding right into this contest.

Prediction:
Cowboys by 11 to 13 points

Now, it's your turn to jump in and win some money!

After you download the app and submit your selections for the upcoming contest, be sure to share your picks with us by tagging @FOXSuper6 and @EricaReneeD and use the #EricaSuper6 hashtag across all social media platforms.