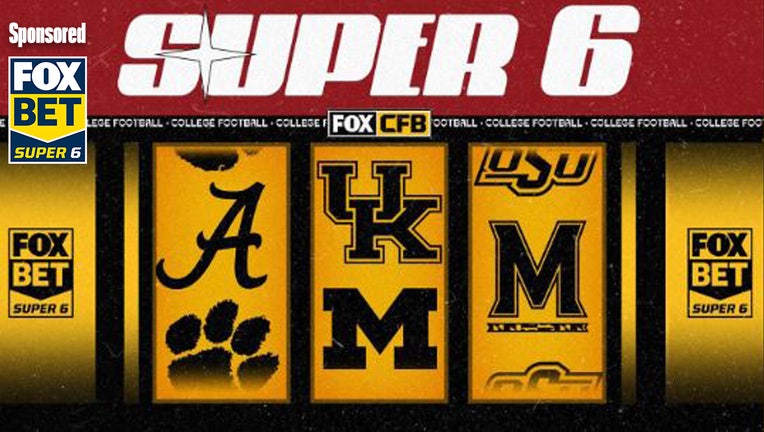 New week, new $25,000 College Football Pick 6 contest in the FOX Bet Super 6 app. Play for a piece of the jackpot. Find out how!

We're in Week 5 of the college football season, and we have $25,000 to giveaway in the FOX Bet Super 6 College Football Pick 6 contest!

Do you realize how many orders of those stadium nachos you could buy with 25 grand? With that kind of extra cash in your pocket, you could even tell them to give you two extra pumps of that orange cheese. And throw some more jalapeños on top, too, while you're at it.

The world would be your oyster.

But how can you win this money? So happy you asked.

The FOX Bet Super 6 College Football Pick 6 is a free-to-play contest. We give you six marquee matchups, and you give us your picks for the winners of each game and the margins of victory.

All you have to do to play for the $25,000 jackpot is download the FOX Bet Super 6 app, open the College Football Pick 6 challenge, make your selections and get them in before Saturday's games kick off.

We want you to win, so before you make your picks, let's dive into our tips!

Jumping right into this week's predictions with bars because why not.

Seriously, though, this one will be a tough matchup between 4-0 squads that will come down to the wire.

Last week against Northern Illinois, Kentucky held the Huskies to 199 passing yards. With that game, the Wildcats have held its first four opponents under 200 passing yards for the first time since 1989. Considering head coach Mark Stoops was a defensive back during his college playing career, UK having a stout D under him certainly tracks.

But Ole Miss would like to have a word.

The Rebels are one of four FBS squads averaging 40 or more points per game while giving up 10 or fewer. Ole Miss ranks fourth in the nation in rushing yards per game, with an average of 280.8 yards per contest.

But we're gonna use the good old-fashioned eye test for this one. And what we see is Kentucky has the best win of the season between these teams. In Week 2, the Cats toppled Florida 26-16. The Rebels' best win? If we were forced to pick one, we'd say it was their 28-10 win over Troy in their season opener.

Cats get this win.

Prediction:
Kentucky by 7 to 9 points

The undefeated Wolverines got past a feisty Maryland team last week. This game against Iowa will be another tough challenge.

The 3-1 Hawkeyes are fourth in the nation in red zone defense and sixth in the country in total defense. In their last two games, the Hawkeyes have not committed any turnovers. To say Iowa keeps a hawk's eye on the ball is an understatement.

Michigan comes into this game with one of college football's best running backs, Blake Corum. His 7.47 yards per carry rank third in FBS. As a team, Michigan is tied for third in the nation with 22 rushes of at least 15 yards. Clearly, Michigan's ground attack has been an important piece to their perfect season so far.

Something else to note. Michigan leads this all-time series 43-15-4. And they previously faced off against each other in last year's Big Ten championship game. Big Blue won easily, 42-3.

After this weekend, the Wolverines will have two straight W's over the Hawkeyes.

Prediction:
Michigan by 10 to 13 points

You know how usually Alabama will legitimately look like Goliath against basically every opponent? And then there is that one game — maybe even two — that exposes the Tide for the mere mortals they are?

Well, this Arkansas game is one of those.

The Razorbacks are coming off a narrow 23-21 loss to Texas A&M, but there are a few bright spots for coach Sam Pittman & Co. as they host Bama. The Razorbacks have intercepted 28 passes since the beginning of the 2020 season, which is tied for second-most in the SEC. And they lead the nation in sacks with a tally of 20. That's four more than the next-closest team.

​But regardless of how close we think Arkansas can keep this contest, Bama is still Bama.

And Bama owns this all-time series 22-8.

So will this be close? Yes. But will Alabama go back to Tuscaloosa with a win? Also, yes.

Prediction:
Alabama by 4 to 6 points

Michigan State has as many losses over two games this year as they did all of last season. Sparty is going through some things, and we expect Maryland to take full advantage this weekend.

At FOX Bet, the Terrapins are 8-point favorites. A late, garbage-time touchdown and 2-point conversion helped Maryland cover the 17-point spread last week against Michigan — and cost a Super 6 contender. But the Terps still didn't get the straight-up win. This weekend will be different. Look for Maryland to win and cover.

Maryland has won six-consecutive games against unranked teams. Pot, meet Kettle. But the stat still stands. The Terps have also scored on 15 of their 16 red zone drives. And we cannot overstate how difficult that is to accomplish.

Prediction:
Maryland by 10 to 13 points

"They haven't played anybody!" That's us yelling into the void about both these teams. Okay, Baylor played BYU and lost 26-20. But perusing these squads' matchups, I'm seeing teams like Albany and Arkansas-Pine Bluff!

But this week begins the real slate of games for State and Baylor.

Oklahoma State is 11-7 against the spread (ATS) and 10-8 straight up (SU) against Baylor under coach Mike Gundy. In their last seven games against AP-ranked opponents, the Cowboys have gone 6-1 SU.

Baylor, on the other hand, is 3-5 SU when facing Top 10 opponents since 2018. But these other stats make us turn a curious eye to the Bears.

When they're a favorite at home, like they are this weekend, the Bears are 10-0 against Big 12 opponents since 2017. And for 18 consecutive games, those burly Bears have held opponents to under 30 points.

We've never seen a bear in the wild fall to a cowboy, and we won't see it this weekend, either.

Prediction:
Baylor by 7 to 9 points

Saving the best for last. This one will certainly be the kind of game that brings you to the edge of your seat.

Clemson indeed owns the series 59-29-1, but the Wolfpack did beat the Tigers last year, 27-21. And we're picking them to pull the upset again this year.

Let's look at the Pack. NC State leads the ACC allowing an average of just 11.8 points per game for opponents. The 261.5 yards per game they give up is second-best in the conference. And they're allowing a 25% third-down conversion rate which is tied for seventh in FBS.

Clemson comes into this matchup with a little extra confidence because it thrives in night-game atmospheres. Since 2015, the Tigers have gone 43-7 in night games. They also own the nation's longest active home win streak at 36. Under coach Dabo Swinney, Clemson is 84-3 as a home favorite.

But we cannot get Clemson's game against Wake Forest out of our minds. It took the Tigers two overtime periods to defeat the Demon Deacons last week, a squad that we would argue is not as talented from top to bottom as NC State.

Prediction:
NC State by 1 to 3

Open your FOX Bet Super 6 app and make your selections before Saturday's games kick off. Remember to tag us across all social media @FOXSuper6 and @EricaReneeD and show us your picks using #EricaSuper6.