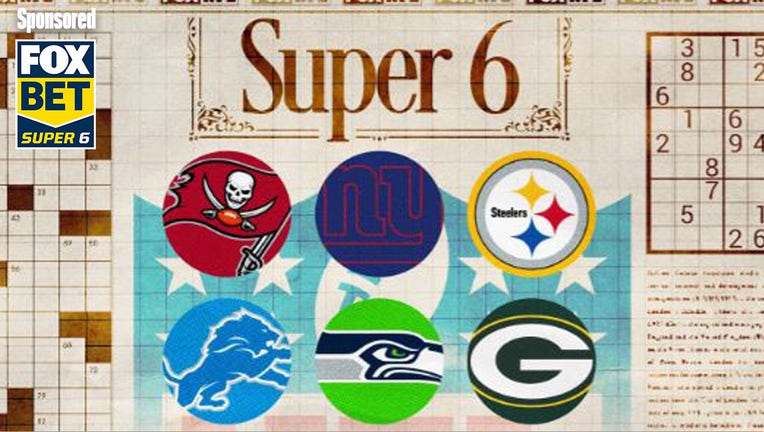 I love the NFL more than Drake loves sitting courtside. But when it comes to the FOX Bet Super 6 NFL Sunday Challenge with $100,000 at stake, I love that even more.

Football. Super 6. Count me in forever and always.

I have a sneaking suspicion a lot of you out there feel the same.

If you're new here, FOX Bet Super 6 is a free-to-play contest where you pick the winners of six marquee games and predict the margins of victory of each matchup. If you get all six correct, you have a chance at winning the jackpot of Terry Bradshaw's money.

How simple is it? Just download the app and get ready to make your picks. For a little help, check out our predictions for this week's Super 6 games.

Even though he's 45 years old, it's hard to bet against Tom Brady. But Brady is not your average middle-aged QB. He's the seven-time world champion, three-time NFL MVP who still has something to say every football Sunday. This explains why he just won't stay retired. But does the GOAT have the gusto to defeat the Saints — a tough division rival — in Week 2?

Currently, oddsmakers at FOX Bet have the home team Saints as 2.5-point underdogs. New Orleans is led by quarterback Jameis Winston, who returns this season after missing most of 2021 with an ACL injury. And when it comes to winning as an underdog at home, the odds are not in Winston's favor.

As a starter at home as an underdog, Jameis is 8-11 straight up (SU). On the other hand, Timeless Tom is 88-32 SU as a starter when his team is the road favorite.

Also, Tom Brady has won five-straight road games, which is the longest active streak in NFL.

As we said, it's hard to bet against Brady.

Prediction:
Buccaneers by 5 to 6 points

The Panthers are on the prowl. They're heading to New York in Week 2 as 2.5-point road underdogs against the Giants.

But here's the question all football junkies need answering. Can Baker be like Beyonce and have his own Renaissance in Carolina?

Well, based on what we saw in Week 1, Mayfield looks less like a superstar and more like an alien. To be fair, it wasn't all bad for Baker in Carolina's loss to his old Browns. He only threw one interception. While he brought them back late in that game, he only threw for one touchdown.

Daniel Jones is leading the Giants' offense, the QB the Mannings claimed was the best, next man up. While Jones hasn't quite lived up to the hype, New York's first-year head coach Brian Daboll might be the key that turns Jones and the Giants' fates around. Also, running back Saquon Barkley averaged 9.1 yards per play in the Giants' Week 1 win over the Titans. If Jones can't get it done in the air, Barkley will do it on the ground.

Something else to consider. The Panthers are on an eight-game losing streak going back to last season.

Concrete jungle where dreams are made of? That's where we're rolling these dice.

Prediction:
Giants by 3 to 4 points

We won't be betting against the Terrible Towels in Week 2. And here's why.

Mike Tomlin has an absurd record against the spread as an underdog. And the line at FOX Bet opened up with Tomlin and the Steelers as 1.5-point dogs. When we saw that, that was our cue to start singing "black and yellow, black and yellow."

What about the Pats? Well, they didn't have the best first game. The Patriots' offense had three turnovers in their Week 1 loss to the Dolphins. And they only scored seven points. The Steelers in Week 1 had seven sacks, tied with the Bills for first in the NFL.

Since 2007, the Steelers are 11-6 SU as home underdogs under Mike Tomlin. So the message is loud and clear to us. Is it to you?

Take Tomlin and the Steelers.

Prediction:
Steelers by 3 to 4 points

Superstar receiver Terry McLaurin and rookie receiver Jahan Dotson caught late passes that helped lift the Commanders in their opening game. Can they ride that momentum into Detroit and against the Lions?

Well, according to history, the Lions might be able to roar.

Motor City, we're riding with you in this one.

Prediction:
Lions by 1 to 2 points

After his spectacular Week 1 Monday Night Football performance, is it time to go all-in on Geno Smith as Seattle's QB1? His 23-for-28 passing, 195 yards and two TDs did help the Hawks sneak past Russell Wilson and the Broncos. So we should expect heroics from the Hawks in Week 2 against San Francisco, right?

The Seahawks swept their season series against the Niners in 2021 and have won four-consecutive matchups against the boys from the Bay. And in their last 13 games in September, the Hawks are 10-3.

Unlike ol' Pete, coach Kyle Shanahan's record against his NFC West rival is nothing to write home about. He's 4-6 ATS and 2-8 SU as a head coach when facing Seattle.

And then there's Trey Lance, who passed for only 164 yards, no touchdowns and one interception in San Francisco's Week 1 loss to the Bears. Tsk, tsk.

If last week was a glimpse into what Trey might look like in Week 2, we're 1000% riding with the Hawks here.

Prediction:
Seahawks by 3 to 4 points

We were right about Kirk Cousins and the Vikings' revamped offense being big trouble for the Pack. But fading Green Bay two weeks in a row? Against the Bears? Nah. We can't.

And Aaron Rodgers, despite falling to the Vikings, is still a bad man.

Prediction:
Packers by 9 to 10 points

Your predictions might look different from the ones we made, but that is what makes this contest so exciting. You never know who will win. After you download the app and submit your selections, share your picks with us by tagging @FOXSuper6 and @EricaReneeD and using #EricaSuper6 across all social media.

We're rooting for you to win this money!