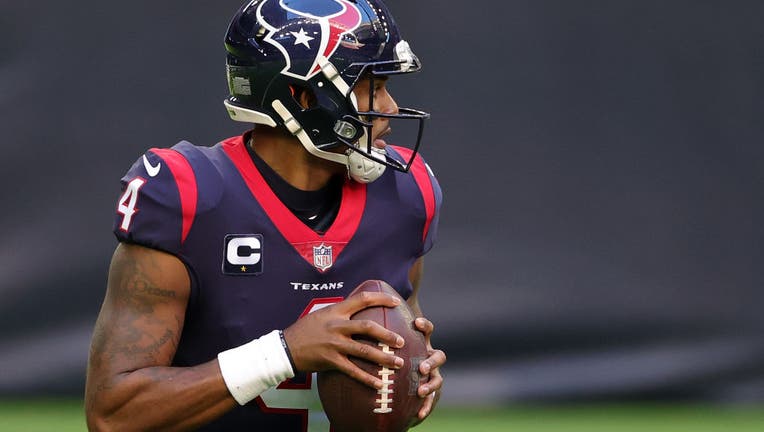 Deshaun Watson was on the field for the start of training camp with the Houston Texans on Wednesday.

The future of the quarterback is uncertain after he asked for a trade in January before 22 women filed lawsuits alleging that he sexually assaulted or harassed them in March. Houston police and the NFL are investigating the allegations, but no charges have been filed.

Watson still wishes to be traded and reported to training camp solely to avoid being fined. He would have faced fines of $50,000 a day if he didn’t report.

Watson wore his red No. 4 jersey over a gray hoodie with sweatpants as he went through individual drills with the rest of the quarterbacks as practice began on Wednesday. He chatted with teammates and coaches during breaks in the action.

Watson declined an interview request through a team spokesman. No reason was provided, but it’s possible he has been advised by his lawyer not to speak to reporters while the lawsuits are ongoing.

General manager Nick Caserio spoke before practice and was evasive when questioned about Watson’s status with the team.

"It’s a day-to-day endeavor," Caserio said. "We’re going to take the information. We’re going to process that. We’re respectful of everybody and everything that’s involved. So we’ll kind of take it one day at a time. And ultimately we’re going to do what we feel is best for Houston Texans."

Caserio and new coach David Culley insisted that Watson was not a distraction to the team.

"He has not been a distraction at all," Culley said. "He’s been very professional about everything, just like all the guys have been here."

Culley deflected most other questions about Watson, including if he expects him to be on the roster when the season begins and if he’ll take snaps with the first team during camp.

"Right now we’re in training camp and... there are no starters right now, everybody’s competing for a job," Culley said.

The NFL released a statement regarding Watson on Tuesday that although its "review of the serious allegations against Deshaun Watson remains ongoing and active," there were no restrictions on his participation in team activities.

Watson led the NFL in yards passing last season and signed a four-year, $156 million contract extension with the Texans last offseason. But he became unhappy with the direction of the team and requested a trade in January after the Texans, who won the AFC South in 2018 and ’19, sank to 4-12 last season.

Caserio signed veteran Tyrod Taylor to a one-year deal in March to give the team an insurance policy at quarterback if Watson can’t or won’t play this season. The Texans selected Stanford’s Davis Mills in the third round of this year’s draft, and he and Jeff Driskel, a recent free agent signee, will likely compete to back up Taylor if Watson isn’t an option.

Watson did not line up at quarterback during the team portion of practice, instead standing on the sideline while Taylor, Mills and Driskel ran the offense in those periods. But at one point in practice Watson changed from his No. 4 jersey into No. 23 and lined up as a safety on defense during a scout team drill.

Culley said Watson was held out of 11-on-11 work as he gets acclimated to the team after missing all of the offseason programs.

"We don’t want to get into the situation where we’re having him do something that he’s not ready to do right now," Culley said. "We decided that the individual period was the period that we could get him in where nothing happens."