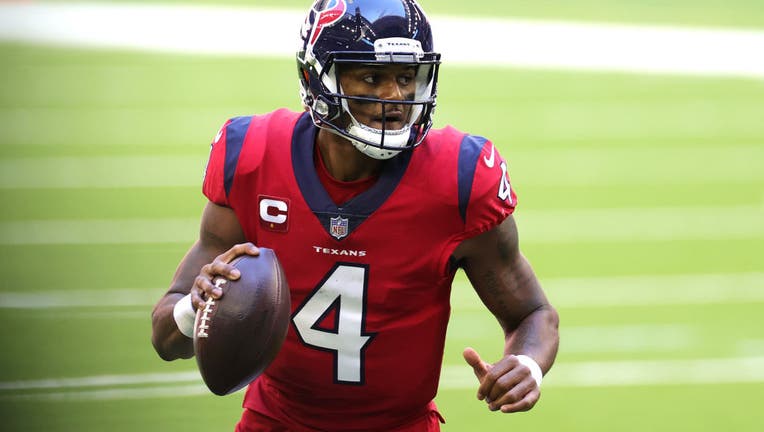 HOUSTON, TEXAS - DECEMBER 06: Deshaun Watson #4 of the Houston Texans scrambles with the ball against the Indianapolis Colts during the first half at NRG Stadium on December 06, 2020 in Houston, Texas. (Photo by Carmen Mandato/Getty Images)

HOUSTON - The National Football League has released a statement regarding Houston Texans Quarterback Deshaun Watson ahead of training camp scheduled for this week.

In the statement, the NFL said, "The NFL’s review of the serious allegations against Deshaun Watson remains ongoing and active. We are working cooperatively with the Houston Police Department and ensuring that the NFL’s inquiry does not interfere with their investigation. As we continue to gather additional information and monitor law enforcement developments, we will make appropriate decisions consistent with the Collective Bargaining Agreement and the Personal Conduct Policy. At this time, there are no restrictions on Watson’s participation in club activities."

FOX 26’s Mark Berman reported on Twitter that according to league sources, the NFL has not been given access to speak to many of the plaintiffs in the civil cases or to third parties who may have relevant information.

"The law enforcement investigation also remains in process and therefore the NFL has not been given access to evidence the police have gathered in their investigation."

The statement comes after Watson’s lawyer confirmed to FOX 26 that there are currently 10 complaints against the Texans quarterback. We're told eight of the complaints were from women who have already sued Watson, while two others were from people who did not sue him.

Currently, there are 22 lawsuits that have been filed against Watson alleging assault or harassment claims.

We've also reported that the Texans have been willing to trade quarterback DeShaun Watson since before the NFL Draft. However, they have yet to receive any offers because of Watson’s legal situation.

Watson is expected to report to training camp with the Texans this week.