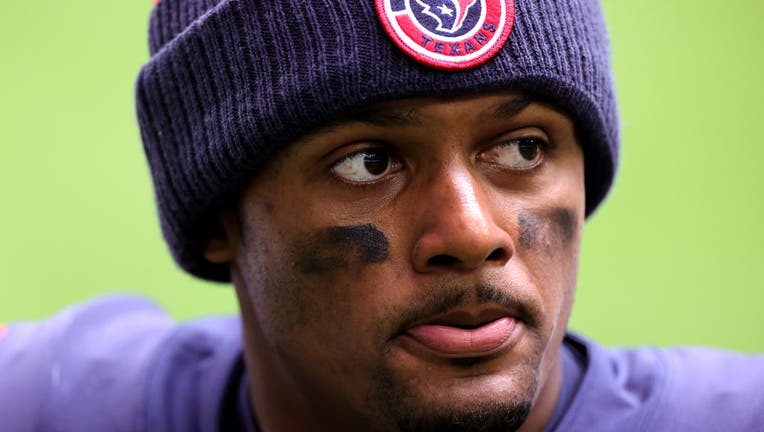 HOUSTON, TEXAS - DECEMBER 27: Deshaun Watson #4 of the Houston Texans looks on against the Cincinnati Bengals at NRG Stadium on December 27, 2020 in Houston, Texas. (Photo by Carmen Mandato/Getty Images)

HOUSTON - Houston attorney Tony Buzbee, who represents 22 women who filed civil lawsuits against Houston Texans quarterback Deshaun Watson alleging sexual assault and/or sexual misconduct, responded to multiple reports the NFL has not been given access to speak to many of the plaintiffs in the civil cases or to third parties who may have relevant information.

"To suggest the NFL hasn’t got enough information or has not been provided access, that’s just demonstrably false. I think if you ask the NFL directly they would have to admit that," Buzbee said in a telephone interview with FOX 26 Sports from France.

"I don’t control the corroborating witnesses. Maybe they reached out to witnesses who do not want to cooperate. I don’t know. Obviously, the NFL has no subpoena power and everybody’s doing this voluntarily. I don’t know who the sources are or what they’re saying, but I do know my staff has spent many, many, many hours voluntarily, because the NFL asked us to, and these women have went out of their way to provide information.

"My question would be how many times do you need to hear the same thing over and over until you draw a conclusion? That’s my problem with this whole thing and I don’t (care) if Deshaun Watson plays or not. That’s not my issue. That has nothing to do with this case."

"It seems like most people are spending their time guessing whether Watson will play and with whom he will play and ignore the big elephant in the room, which is what about the 22, 25, 26, whatever the number is women, who had contact with him who are making some incredibly serious allegations?"

Buzbee pointed out other attorneys might have counseled their clients not to discuss this case in any situation other than under oath in court, but he said half of them wanted to.

"Based on my discussions with Lisa Friel (NFL’s lead investigator) and some of her team, and some candid conversations I had with them, I would not have allowed my clients, or I certainly would have counseled against my clients talking to them had I not on the front end felt confident that they were gonna take this seriously and not waste our time," Buzbee said.

"I’ve been asked questions about what are your thoughts about the NFL’s statement on this and that. I don’t have an opinion on that. I will say, as just a bystander, having been a football fan for many years, the NFL is not known for being women advocates or being an outfit that cares a whole lot about sexual assault and sexual abuse of women, despite when they wear pink every now and then. Let’s be clear.

"You can wear pink one game a year or two games a year, but that doesn’t change the long history the NFL has with regard to the treatment of women."

"We’re not gonna comment directly on his comments," McCarthy said. "In general, we take this matter very seriously as demonstrated by our thorough and comprehensive review. As we stated from the beginning, we welcome the opportunity to speak to any people who would want to come forward."