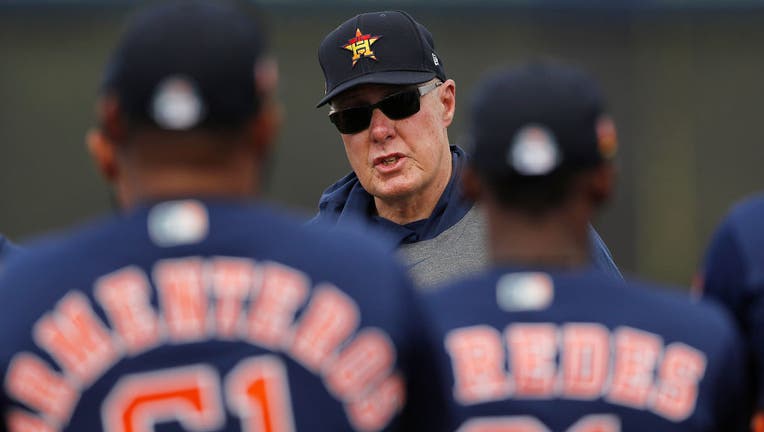 WEST PALM BEACH, FLORIDA - FEBRUARY 13: Pitching coach Brent Strom of the Houston Astros talks with the pitchers during a team workout at FITTEAM Ballpark of The Palm Beaches on February 13, 2020 in West Palm Beach, Florida. (Photo by Michael Reaves/

HOUSTON - Astros pitching coach Brent Strom is a big reason why the Astros won the World Series in 2017, have been to two World Series in the last four years and four consecutive American League Championship Series.

At age 72, Strom is planning to return to the Astros in 2021, but given everything that has happened this year he had a decision to make with the season ending after game seven of the ALCS against the Rays.

“I’m not a spring chicken anymore,” Strom said in an interview with FOX 26 Sports. “The COVID thing was difficult, being away from family and everything. As of right now, I plan on coming back next year. I do have a contract. I enjoyed my time with (Astros manager) Dusty (Baker) a great deal and the young pitchers. So I would say I will be coming back and looking forward to another season.

“At moments when you’re kind of struggling and things aren’t going your way, there’s a tendency to kind of think about ‘well maybe I’ve never had a summer to myself,’ and those thoughts enter your mind, but then they’re dissipated when you see the effort and the success that some of these young guys had this year. So it was kind of rejuvenating for me.”

The fact that Astros owner Jim Crane picked up the 2021 option on his contract four games into the regular season, along with the options for Baker and third base coach Gary Pettis, was significant to Strom.

“That meant a lot and went a long way, and for him to do this so quickly really set my mind at ease a little bit knowing that I had the option and he welcomed me back,” Strom said.

“When I took this job years ago, the guy who picked me up at the airport was Jim Crane, which spoke volumes to me. I didn’t expect the owner of the ball club to pick me up. That tells you the type of man and owner he is.”

The Astros young pitchers are among the many reasons why Strom is still working at his age.

“I think I love the game a great deal,” Strom said. “I love the young pitchers this year. The young pitchers that our player development people sent to us were fabulous. I’m talking from (Cristian) Javier, (Enoli) Paredes, Framber Valdez came into his own. Some of the other guys we picked up, Andre Scrubb, the list goes on and on. It was kind of a challenge with the young pitchers in the bullpen and piecing together our rotation. To see how well they did. How they grew. We had our bumps. There’s no question about it. We were up and down for the season, but come playoff time, I thought we more than held our own. I think that went a (long) way of making up my mind (to keep working).

“It was nerve-racking. I had a great deal of help with (bullpen coach) Josh Miller and..the PD (player development) department run by our minor league staff, (minor league pitching coordinator) Bill Murphy and the guys down there, (Round Rock pitching coach) Drew French.

According to Strom, the Astros position players did a great job supporting his pitching staff as well, especially shortstop Carlos Correa.

“If you noticed late in the (ALCS) series, especially game six, game seven, there were times that I was going to go make a trip to the mound and I was at the top step,” Strom explained. “Then I noticed Carlos Correa coming in and I said ‘I don’t need to go.’ Carlos Correa basically became a conduit for me and he had been around me enough and he was a motivating factor for these young kids. So I just stayed in the dugout and let the players play.”

And Strom points out Correa’s support for the Astros pitchers represents only one of the ways he is a leader for this franchise.

“He basically took all the heat that we were taking and placed it on his back and carried us and everybody followed,” Strom said. “His leadership skills are beyond reproach.”

And speaking of his pitching staff, Strom said Framber Valdez and Jose Urquidy are on their way to becoming very special pitchers.

“Each of them have a chance to be top of the line pitchers for a first division team, particularly Framber Valdez,” Strom said. "Where he came from, what he accomplished in this series, he made a name for himself. He became a force on the mound. Just really excited for him. He’s a family man now. I think he’s expecting his second child. I think that had a great deal to do with him maturing and growing up.

“Urquidy, we saw what he did in the (2019) World Series, so that was not a surprise to see him having success. I just wish we could have had him sooner. COVID did not allow that, but these are two guys that you can build your rotation around.”

Strom could not say enough good things about manager Dusty Baker and used this interview to make a point.

“Dusty is as fine a human being as I’ve ever been around in this game,” Baker said. “He is very thoughtful. He cares about his players. He cares about them to the extent that, I’ve been thinking about it. I knew we were going to do this Zoom call and there’s something I want to bring up. He’s taken a lot of heat when he was with the Cubs (manager 2003-06) and I watched that from afar, in terms of hurting pitchers arms, like Mark Prior and Kerry Wood, and I’m here to tell you that this manager cares more about his pitchers’ arms than even I did. He was much more conservative in his thinking with young pitchers like Paredes and Javier and those kind of people. Where I was more aggressive and this is coming from someone who was the second person to ever have Tommy John surgery.

“So when I read these comments on Twitter from people that are sitting in their mothers’ basements writing stupid ideas that Dusty Baker ruined Mark Prior’s arm or ruined Kerry Wood’s arm, God could have been the manager of the Chicago Cubs and Kerry Wood and Mark Prior would have hurt their arms themselves due to their delivery. It had nothing to do with Dusty Baker and his usage. Mechanics are mechanics. Movement patterns are movement patterns. Watching them and studying them throughout the years, they were both on the trail to having arm injuries. Dusty Baker undeservedly has gotten too much heat for their injuries when it was self-imposed. Their deliveries created it. Dusty is very caring about his young pitcher's arms. He always second-guesses me when I say a guy’s ready to go.

“If you noticed this year, until the playoffs, nobody and I mean nobody, threw three days in a row until (Ryan) Pressly threw three days in a row, games four, five and six (of the ALCS). With that in mind, we were very conservative with our young relievers, with our pitchers watching their pitch counts. Dusty Baker deserves a great deal of credit for the health of this pitching staff that navigated this 60-game schedule.”

Strom is very hopeful third base coach Gary Pettis, who is battling multiple myeloma, will return to the Astros staff in 2021.

“Obviously, one of my closest friends. Gary, I’ve stayed in close contact with him, despite him being a Laker fan and me a Celtic fan," Strom said. "I love this guy. He’s doing well. I talked to him during the series, after the series. I was really glad he was able to join us (at Petco Park in San Diego) and a lot of thoughts and prayers always go out to him, and I really do hope to see him in the dugout next year.”