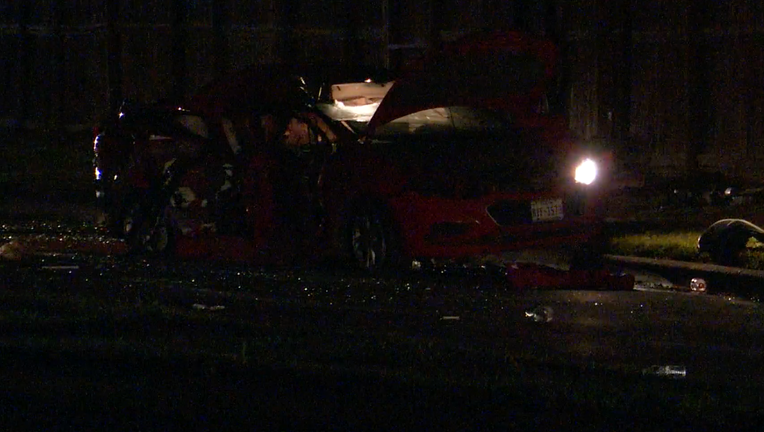 CYPRESS, Texas - A woman is dead after a crash in Cypress, and her girlfriend who was driving is facing charges.

Harris County Sheriff's Office deputies received a call about a single vehicle crash in the 12500 block of Telge Road in west Harris County at 2:09 a.m. Friday.

When they arrived at the scene, they found a red Chevrolet Cruz in the northbound lanes with heavy damage on its right side.

The Harris County Sheriff's Office says two drivers fled after hitting a pedestrian on the Eastex Freeway. The pedestrian died from his injuries.

Initial findings show that the vehicle was traveling southbound when it struck a raised outside curb. The driver lost control and veered into the center grass median, where the car hit the tree with its right side near the passenger.

That car continued traveling into the northbound lanes where it came to an uncontrolled rest.

Cy-Fair EMS responded to the crash and pronounced the female front passenger dead at the scene.

The female driver, who showed signs of intoxication, was transported to Houston Northwest with injuries to her head.

Sheriff Ed Gonzalez has identified the driver as Arely Razo.

Razo, 26, has been arrested for intoxication manslaughter.

A driver who hit a Houston police officer’s vehicle and then drove away was later taken into custody and appeared to be intoxicated, authorities say

A witness told investigators on the scene that the same car with the same occupants were last seen leaving a bar down the road on Telge Road.