The mayor was joined by several local officials to share details on the parade expected Monday in commemorating the Astros' World Series Championship after a 4-1 defeat against the Phillies.

HOUSTON - What's a Houston Astros World Series championship without a victory parade? Here's everything you need to know about the exciting event happening on Monday and Alex Bregman's own after-party!

During a press conference on Sunday, Houston Mayor Sylvester Turner announces the Astros victory parade will be on Monday starting at 12 p.m. The parade will be in downtown Houston and will start at the intersection of Smith St. and Preston St. and end on Smith St. and Tuam St.

The route is about 2 miles long and Houston Police Chief Troy Finner reminded people not to park their cars on Smith St. as well as Bagby and Louisiana St. 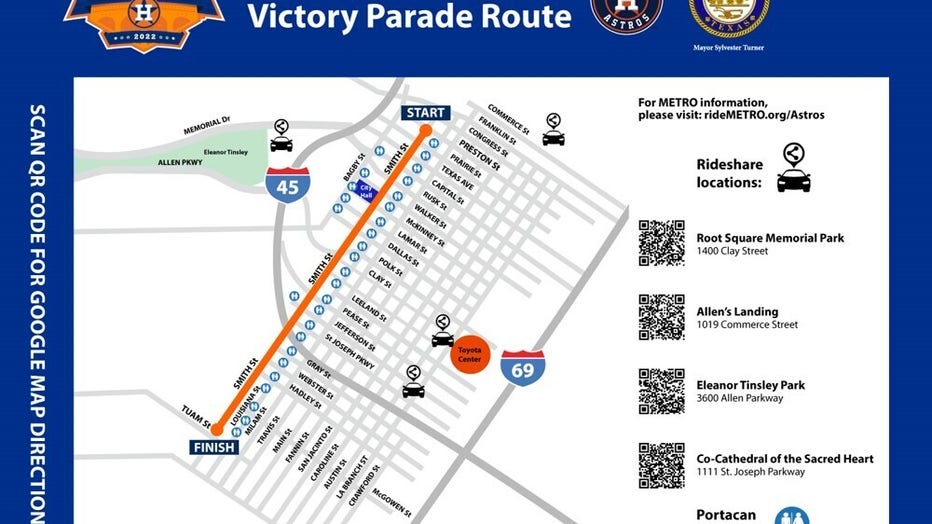 (Photo Courtesy of City of Houston)

Those planning to attend are also encouraged to take a ride-share service or use the METRO. Route Square Memorial Park, Allen's Landing, Eleanor Tinsley Park parking lots, and the Co-Cathedral of the Sacred Heart will be used as ride-share drop-offs and pickups.

METRO announced the services will be free throughout the parade day. An estimated one million people will be traveling downtown to the celebration which will force several streets to be closed and cause detours of about two dozen bus routes. Customers can find a complete list of detoured routes at RideMETRO.org/astros.

Houston Mayor Sylvester Turner announced details of the Houston Astros' victory parade that will be held on Monday in downtown and several schools have closed so students, faculty, and staff can join in on the celebration.

Astros owner Jim Crane says, "We really appreciate the city support. We couldn't do it without the city. The city really got behind the team."

Hundreds of city and surrounding area officers of different agencies will be out during the parade to ensure public safety. 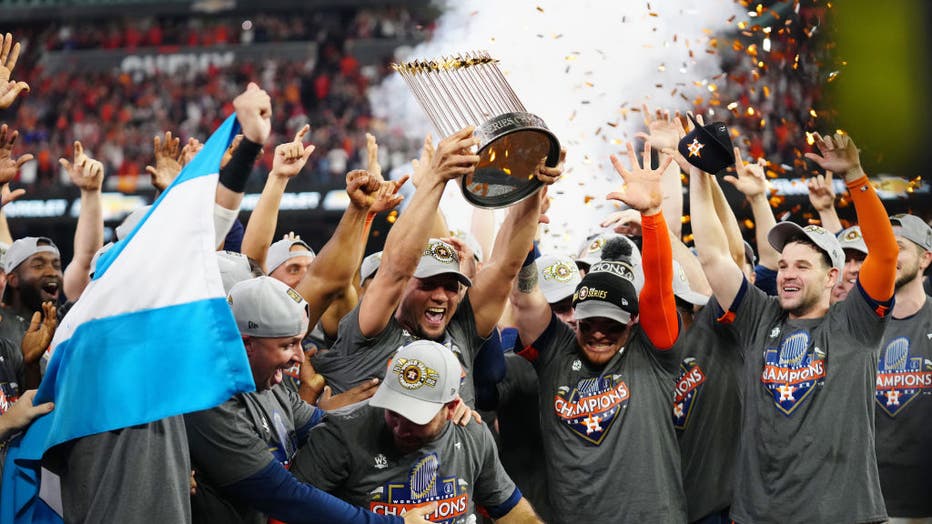 HOUSTON, TX - NOVEMBER 05: The Houston Astros celebrate after defeating the Phillies, 4-1, in Game 6 of the 2022 World Series between the Philadelphia Phillies and the Houston Astros at Minute Maid Park on Saturday, November 5, 2022 in Houston, Texas

It was also announced that Texas Southern and University of Houston marching bands will be in attendance.

Luckily, the party doesn't stop after the parade! Houston Astros third baseman Alex Bregman announced that his brand, Breggy Bomb, will be hosting an After Party at Little Woodrow's Midtown located at the end of the parade route at 2306 Brazos St. The event starts at 1 p.m.

Mayor Turner said this about the Astros bringing the city together with this win, "It reminded me of what Nelson Mandela said years ago when he took over as head of South Africa. He says ‘sports are the one thing that can unite us as a country and pull us and push us all forward together' and so that's exactly what the Astros did in 2022."

Many school districts in the Houston area are closing on Monday so students, faculty, and staff can go out and celebrate at the parade. Attendees are encouraged to bring water and something to snack on during the parade as it is expected to be sunny outside.

FOX 26's Ruben Dominguez talks with Astros Vice President of Retail on what merch they have available for fans.

METRO says they will continue to operate local bus, Park & Ride, and METRORail Red Line service for as long as possible and shred the following service adjustments:

Regular service around downtown will resume when the parade route opens to regular traffic and crowds reduce.