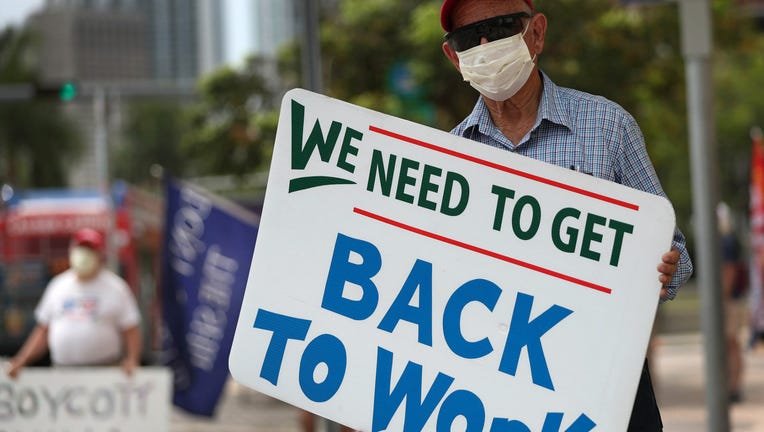 Pedro A. Delgado holds as sign reading, 'We need to get back to work,' as he joins with other protesters in front of the Freedom Tower on April 25, 2020 in Miami, Florida. (Joe Raedle/Getty Images)

The U.S. unemployment rate will likely get worse before it gets better, Treasury Secretary Steven Mnuchin said Sunday after unemployment hit 14.7 percent last week, the highest level since the Great Depression.

"Unlike the Great Depression where you had economic issues that led to this, we closed down the economy," Mnuchin said on "Fox News Sunday." "The reported numbers are probably going to get worse before they get better. That's why we're focused on rebuilding this economy."

The "biggest component" of job losses was in travel, retail and leisure, Mnuchin said.

Mnuchin has predicted a "better" third and fourth quarter and a "great" 2021.

"My numbers aren't rosy. … You're going to see a bounceback from a low standpoint," Mnuchin said. "My predictions are based on what I see is the rate of reopening in a careful way."

More than a decade of job gains were erased in April; the stunning job losses are more than double what the U.S. saw during the 2008 financial crisis.