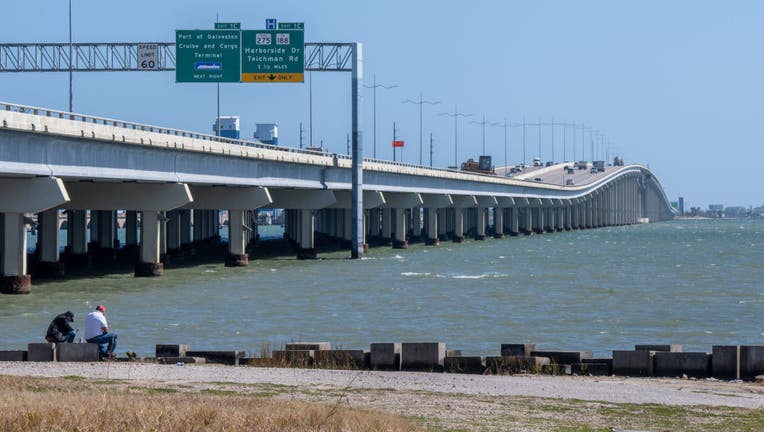 GALVESTON, TEXAS - FEBRUARY 16: (L-R) Jonatan Hernandez and Luis Socoy sit alongside highway 45 on February 16, 2022 in Galveston, Texas. The National Oceanic and Atmospheric Administration and six other federal agencies are reporting that over the n

GALVESTON, Texas - Good news for Galveston drivers: there won't be as much traffic this weekend!

PREVIOUS: Roads reopened on I-610 West Loop, I-45 Gulf Freeway north of Galveston

According to a press release from the city, the Texas Department of Transportation (TxDOT) agreed to "abandon the current traffic plan for the inbound and outbound lanes of the Santa Fe overpass and causeway and undertake temporary shoring and repairs to existing outbound Santa Fe Overpass."

MORE STORIES OUT OF GALVESTON

TxDOT officials say crews and contractors will still work through the weekend to perform stabilizing and shoring up the old bridge, however. Starting early next week, TxDOT officials say they will begin by removing existing lane alignments and returning all traffic to normal patterns.

All this will be done at night or at least during non-peak traffic hours. There may still be some lane closures due to these changes, but Galveston city officials say they are working to give residents as much notice as possible.

Once back to normal, TxDOT says it'll be expediting the new frontage road bridge that will later carry traffic lanes while the older bridge is demolished.

"The City of Galveston wishes to express its thanks to the Texas Department of Transportation, and in particular Eliza Paul, for their continued efforts to hear our issues and to work toward this resolution," the city said in a press statement.