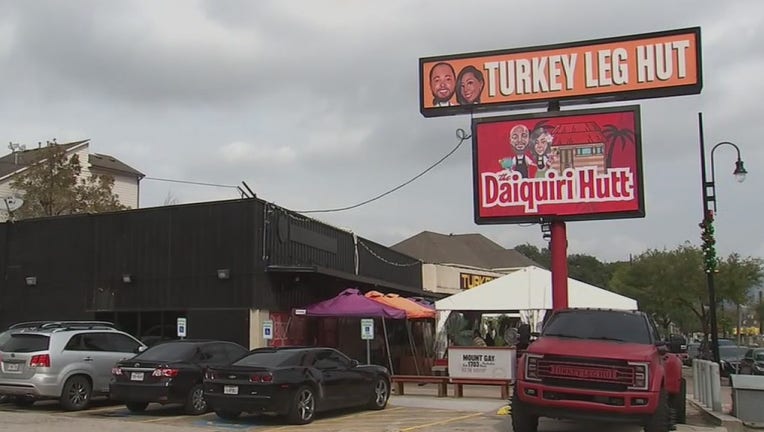 HOUSTON - The attorney for a group of Third Ward residents says the neighbors have agreed to suspend litigation against the Turkey Leg Hut restaurant.

Last month, neighbors living near the popular Third Ward restaurant filed a lawsuit claiming the restaurant is a risk to their health.

Cris Feldman, of Feldman & Feldman, PC, said, “We agreed to temporarily suspend, or ‘non-suit without prejudice,’ the litigation to give the Turkey Leg Hut owners one last chance to get in compliance with the law and finally become good neighbors. Throughout 2019, neighbors have endured a noxious stream of smoke from the restaurant. Contrary to the manufactured ‘antigentrification’ campaign of Turkey Leg Hut activists, this legal dispute emanated purely from the public health, nuisance and regulatory issues caused by the operation of the restaurant which only moved to the area in mid-2018.”

Another hearing was scheduled for Monday.

During the last hearing, a judge kept in place a temporary restraining order limiting their meat smoking hours, but only for three days.

Neighbors claimed the restaurant’s outdoor cooking area is illegal and that the smoke is a health hazard.

"For more than a year,” Feldman added, “Third Ward residents near the Turkey Leg Hut strived to work with its owners only to be threatened legally and attacked on social media and elsewhere. The neighbors hope the suspension of the litigation causes the [owners] to make the most of this opportunity to comply with local laws and city health department regulations like other restaurateurs. After all, the Turkey Leg Hut’s outside cooking operation is still illegal. If it stays that way, we’ll be back in court.”

In the emergency motion filed in November, Turkey Leg Hut alleged the neighbors were not aiming at smoke or noise but were hiding their true goal of getting rid of the restaurant.

"From the moment we were engaged, we suspected this was not about smoke but rather about forcing the Turkey Leg Hut out of its location,” Jane Robinson, an attorney with the Turkey Leg Hut’s legal team from AZA Law Firm, said Monday. “We were not about to let that happen. We are pleased that these neighbors have elected to drop the suit quickly and proud to have had the opportunity to fight for Turkey Leg Hut."

At a press conference in November, the restaurant owner and attorney for Turkey Leg Hut said the allegations are false.

John Zavitsanos, Lead Counsel for the Turkey Leg Hut, said on Monday, "We’re pleased the plaintiffs voluntarily requested an unconditional dismissal of this unfounded lawsuit today. For the past two weeks, the plaintiffs and their attorney have publicly villainized the Turkey Leg Hut and its founders, falsely claiming the restaurant to be an illegal operation, a health hazard and a public nuisance, run by people who don’t care about the health and wellbeing of the community, and who are somehow above the laws in the City of Houston. Unfortunately, this lawsuit has damaged the good name of our clients, their reputation, and their business operations.”

Nakia Price, Co-Founder of the Turkey Leg Hut, said in a statement Monday, "This has been an extremely challenging ordeal for our family, but we are so grateful for all the love and support we’ve received from the community. My husband, Lynn, and I want to thank our amazing legal team, our staff, customers and the community for seeing us through the challenges of these past few weeks.  We love our home here in the Third Ward and will continue to do our best to be good neighbors, bring people together, and help the community here thrive.”