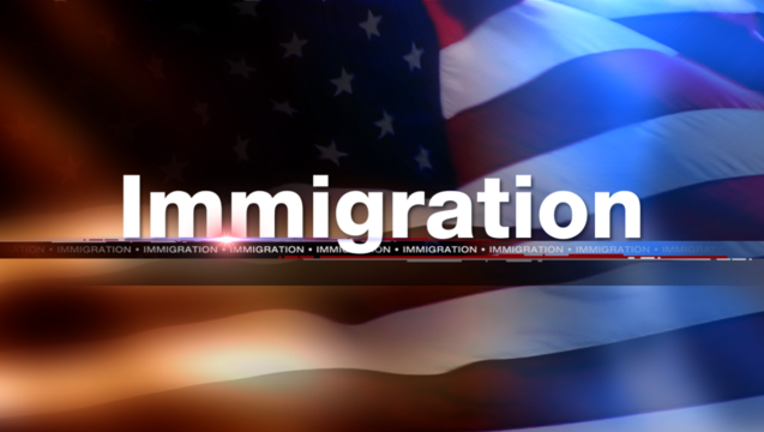 WASHINGTON (AP) - The Latest on immigration legislation (all times local):

It would help young immigrants brought to the U.S. illegally as children to attain legal status. It also takes steps to strengthen border security without specifically financing the wall with Mexico that Trump wants.

Trump wants Congress to also restrict legal immigration to the U.S. by limiting relatives immigrants can sponsor and eliminating a visa lottery.

Coons says Trump has made a broader bill "more politically complicated" because of his obscene description last month of African countries. Trump calls a bill without wall money "a waste of time."

Conservative Hispanic leaders are urging Democrats to come to the table to negotiate with the Trump administration on immigration.

They tell reporters after the meeting that Trump is interested in making a deal to allow hundreds of thousands of young immigrants known as "Dreamers" to continue to live and work in the country.

Democrats have scoffed at the president's plan, which would provide Dreamers a path to citizenship in exchange for billions for a southern border wall and large cuts to legal immigration.

The leaders are accusing Democrats of "playing politics" on the issue. But Democrats say Trump is using the young immigrants to try to push through his hard-line immigration plan.

President Donald Trump says he won't back an immigration deal without money for a border wall.

Trump's statement came Monday as two senators planned to introduce compromise legislation that would protect immigrants who entered the country illegally as children. The proposed legislation also would strengthen border security, but stops short of explicitly providing money for a wall along the boundary with Mexico.

Trump appeared to be responding to the legislation from Republican Sen. John McCain and Democratic Sen. Chris Coons when he tweeted: "Any deal on DACA that does not include STRONG border security and the desperately needed WALL is a total waste of time. March 5th is rapidly approaching and the Dems seem not to care about DACA. Make a deal!"

DACA refers to the program that protected the young immigrants, also called the Deferred Action for Childhood Arrivals program.

Two senators are introducing compromise legislation that would help achieve legal status for hundreds of thousands of immigrants who entered the U.S. illegally as children.

The bill calls for bolstering border security by 2020. But it does not explicitly provide money for a border wall with Mexico, the focus of President Donald Trump's immigration policies.

The plan is a more modest approach than Trump has sought for protecting "Dreamers," young immigrants helped by the Obama-era Deferred Action for Childhood Arrivals program.

It lacks Trump's demands for limiting the relatives that "Dreamers" can sponsor for citizenship, and ending a visa lottery aimed at admitting more immigrants from diverse places including Africa.

The measure is by Republican Sen. John McCain of Arizona and Delaware Democratic Sen. Chris Coons.