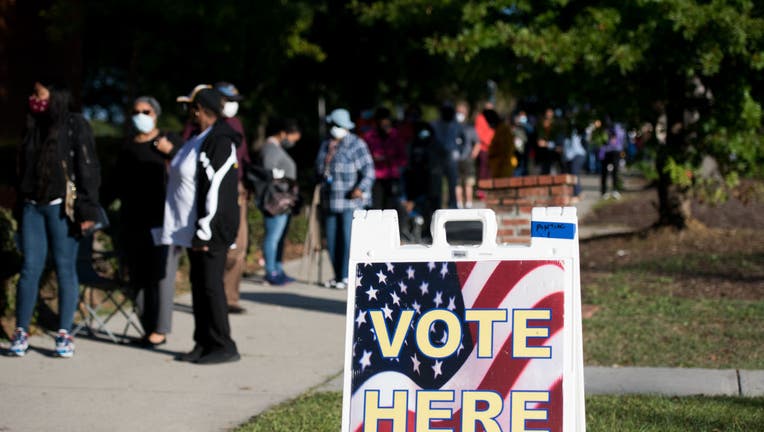 FILE - People stand in line outside of the Richland County Voter Registration & Elections Office on the second day of in-person absentee and early voting on October 6, 2020 in Columbia, South Carolina. (Photo by Sean Rayford/Getty Images)

AUSTIN - The Texas Supreme Court has ruled to allow the extra six days Gov. Greg Abbott added to early voting to make it safer during the pandemic.

The ruling denies the bid of several Texas Republicans who wanted to limit the amount of time voters had to cast their ballots.

Gov. Abbott issued an executive order in mid-July, changing the start of the early voting period from Monday, Oct. 19 to Tuesday, Oct. 13.

Early voting will run through Friday, Oct. 30. Mail-in ballots can also be dropped off at county clerk’s offices during this period.

"By extending the early voting period and expanding the period in which mail-in ballots can be hand-delivered, Texans will have greater flexibility to cast their ballots, while at the same time protecting themselves and others from COVID-19," Abbott said in a July statement.

Texas is one of a handful of states that has refused to expand access to mail-in ballots due to the pandemic. It is keeping its usual rules, allowing mail-in for people 65 years or older, the disabled, people out of the county on election day and people in jail.

Gov. Abbott is also facing lawsuits over his order to limit mail-in ballot drop-offs to a single location per county.

Texas Governor Greg Abbott is facing another lawsuit after he limited the number of mail-in-ballot drop-off locations.

Harris County Judge Lina Hidalgo toured the only mail-in ballot drop-off location in the county after Texas Gov. Greg Abbott limited it to one in each county across the state. Hidalgo says she's disappointed by the governor's order but is making sure everything is smooth for voters despite it.