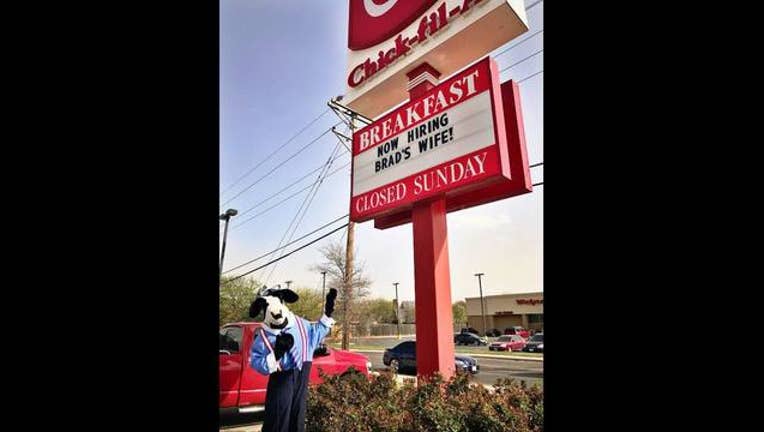 AMARILLO, TX - The sign at an Amarillo Chick-fil-A location is going viral after saying the store is "Now Hiring Brad's Wife."
A man named Bradley Byrd had posted to Cracker Barrel's Facebook page asking why the restaurant had fired his wife, who he said had worked there for 11 years. The post quickly went viral due to many of the responses on Twitter and Facebook.

Brad's wife, whose name is apparently Nanette, is said to have been fired on Brad's birthday. The post has now cooked up hashtags such as #BradsWife, #JusticeForBradsWife and #NotMyCountryStore.
Now, the sign at the Chick-fil-A in Amarillo on South Georgia Street says "Now Hiring Brad's Wife," causing a photo of the sign to go viral. The post on its Facebook page says, "Someone let Nanette know."
Amiri King even shared the post from Chick-fil-A at Georgia Street, which now has almost 15,000 shares.