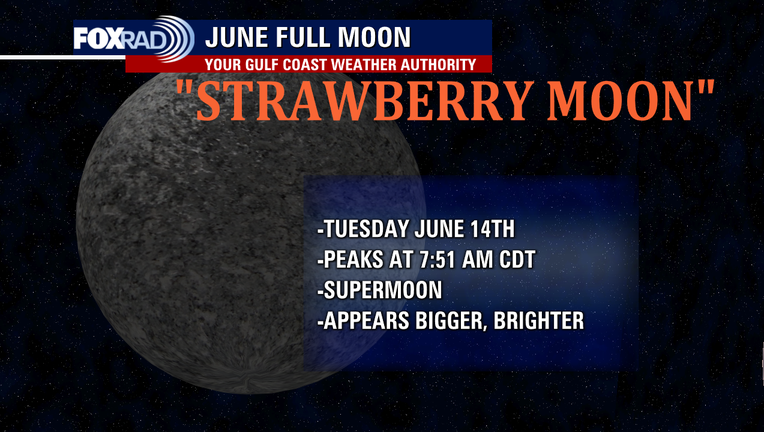 HOUSTON - Did you know that Pasadena used to grow strawberries?

Over a million strawberry plants were introduced into the area to help boost the economy after the Galveston Hurricane of 1900. That area looks very different now, after the shift to more industrial-based exports due to World War II.

Nonetheless, it's a fun, local random fact that ties into June's full moon - the Strawberry Moon, which is named for the time of year when strawberries ripen.

MORE STORIES OUT OF PASADENA

It also has other names, like "Hot Moon," which is definitely fitting the Houston-area forecast. There is also "Mead Moon," which is Anglo-Saxon for the mowing of meads or meadows this time of year.

The Strawberry Moon is a supermoon, which means that it will appear both bigger and brighter due to its proximity to Earth, and will peak on Tuesday, June 14 at 7:51 a.m.

You may be asking yourself, how is it possible that I can catch the full moon during the daytime hours? It will appear full to the naked eye both the night before and the night after, both of which will offer great views with mostly clear skies in the Houston area.

Moon phases are defined by alignment and not by visibility, which is why this month's full moon peaks during the morning hours.