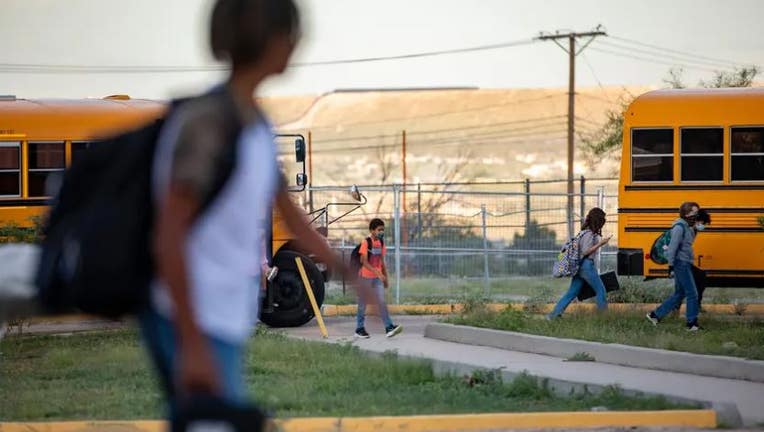 Students arrive at a middle school in El Paso on Aug. 19, 2021. In the past year, Texas Health and Human Services has spent about $3.6 billion on behavioral health services for children and adults, but Texas still ranks 51st among states and Washingt

Jelynne LeBlanc Jamison makes the same impossible choice every month, when hundreds of children she can’t afford to treat show up at her publicly funded San Antonio mental health agency, desperate for help, in severe mental and behavioral distress.

Turning them away would leave her money for a more robust staff at The Center for Health Care Services, where she is director at one of 39 local mental health authorities in the state — and the only one in Bexar County.

It could reduce wait times for the children already in her agency’s care, most of whom are uninsured or don’t have access to a wide range of providers. It would broaden her treatment options and solutions for kids if the services weren’t stretched so thin.

But Jamison chooses to serve all the kids anyway — pulling them into her already overcrowded system of state-funded providers and thus risking employee burnout, long wait times and wait lists or desperate families on borrowed time bouncing between overloaded providers in order to access the help they need.

"Many times, we are the only source for [behavioral health] services," she said. "Therefore, we are still serving the children."

Another $730,000 per year would help the center — which averages about 1,800 children in its care but was funded for only about 1,600 during the last budget cycle — better absorb the cost of treating them.

But Jamison is still waiting for a sign from state health leaders that they’ll consider adding new dollars to her budget for the 2024-25 biennium, when she expects the trend to continue: more adults and children needing help than her clinics have the funding to treat.

Less than three months from now, Texas lawmakers will meet to write the new budget after sifting through more than 100 state agency budget requests that include nearly $20 billion in proposals for new money.

Thousands of U.S. Veterans who have served suffer from mental health issues. A navy veteran shares their story of coping since joining civilian life.

But so far, state health leaders have declined to talk specifics, beyond promising to prioritize child mental health. So for health providers like Jamison, there’s no word yet on how much more funding might be available in the next two years to treat the anticipated rise in patients.

"We are frustrated because we haven’t seen any specific dollars mentioned," Jamison said. "We’ve had no indication."

Texas’ health and human services department, per a recent budget proposal, already anticipates a 5% decrease in federal funding for counseling and medical services for children who are seen at the state’s 39 mental health authorities. Department officials did not include any specific dollar amounts for additional money for child mental health services for the 2024-25 biennium.

In the past year, the agency has spent about $3.6 billion on behavioral health services for children and adults. But Texas still ranks 51st among states and Washington, D.C., when it comes to per capita mental health spending.

Agency officials and lawmakers say they are still trying to determine what kind of funding might be needed to boost services for children, both with the local mental health authorities as well as in other programs in other agencies. The final budget bill is usually passed in May, near the end of the session, and takes effect in September.

How untreated mental health issues can impact mothers & their children

Melissa Towne has admitting to killing her 5-year-old daughter. The case has put a spotlight on the importance of mental health care for women and their children.

What the omission does not signal, they say, is a lack of priority and attention on mental health services.

In the wake of the elementary school mass shooting in Uvalde in May, Republican House Speaker Dade Phelan proposed nearly $100 million in new funding aimed at improving children’s access to mental health services, including expansion of a new telemedicine program and an increase in pediatric psychiatry beds. Gov. Greg Abbott directed more than $10 million to mental health efforts immediately following the shooting, including $5.8 million to expand telemedicine for children and $4.7 million to increase the use of a treatment program for at-risk youth.

How parents can address mental health problems in children

Mental health struggles can take a toll on everyone in families. A doctor shares the warning signs parents should look out for.

It’s a response that one Republican budget leader said should be continued during the next biennium.

"For me, and for other members of the Legislature, this is one of the top priorities," said state Rep. Giovanni Capriglione, a Southlake Republican and chair of the House Appropriations Subcommittee on Health and Human Services. "There’s so much need for these services, and we’re hearing about it from a lot of our constituents as well."

RELATED: Houstonians speaking out to support those suffering a mental health crisis

A spokesperson for the state’s health and human services department said the funding requests for mental health services are "a starting point" and will be updated, as they have been in previous sessions, with more specifics about their goals for children’s programs before debate begins on the budget bill.

Agencies are limited by rules affecting how much they are allowed to increase their requests each year, and may also be hesitant to ask for too little too soon.

Parent to Parent: Recommendation says children as young as 8 should be screened for anxiety

Leaving an amount out of initial funding requests does not always communicate a low priority. Abbott has not specified a dollar amount in his funding request to continue one of his cornerstone programs, the $4.4 billion Operation Lone Star, which is a clear priority.

But as public debate intensifies over how the state will divvy up a $27 billion surplus, the perceived silence by state agencies on behalf of additional child mental health funding has set the community who serves those kids on edge.

Health care providers and advocates say it’s difficult to compete when so many other groups and agencies are already very public and specific about how they want taxpayer dollars spent.

"Given the rise in children’s mental health challenges over the last decade, and all the comments from state leaders about the importance of addressing kids’ mental health, we’re disappointed it isn’t identified as a priority in the budget requests," said Josette Saxton, director of mental health policy at Texans Care for Children.

Texas’ 39 local mental health authorities partner with local schools, governments and community programs to treat adults and children with severe mental illnesses, particularly low-income or rural Texans who have less access to services or providers in their areas.

Children receive therapy or medication or both. When a diagnosis requires intensive treatment, the authorities can provide the child with more comprehensive treatment in an inpatient facility, or long-term home care, either state funded or through a partner provider.

On average, 28,000 children are treated through local mental health authorities in Texas each month, a number that has steadily increased as the state has added to their funding over the years, according to a 2019 analysis by the Texas Legislative Budget Board.

FOX 26 Reporter Tiffany Justice has more on how mental health affects so many people.

But even those budget increases are not keeping pace with the state’s rapid population growth and increase in demand, Jamison said.

And in the wake of the pandemic, mental health providers across Texas say they are more understaffed and overwhelmed than ever before, which leads to families languishing on wait lists or services reduced because there isn’t enough staff to manage the workload.

Record numbers of children and young people are seeking help for issues including anxiety, depression, suicidal thoughts, trauma, an intellectual disability, substance abuse and behavioral problems in the wake of the pandemic, according to multiple studies and the U.S. Centers for Disease Control and Prevention.

Since 2019, much of the new dollars put toward mental health services for young people in the budget bills have gone to the creation and expansion of the Texas Child Mental Health Care Consortium, which has been given about $330 million in state and federal funding since the Legislature created it nearly four years ago.

The Texas Higher Education Coordinating Board, which administers the funding to the consortium, includes $124.3 million in its request for funding the consortium for the next cycle — the same base budget as last year, with no new money.

Checking in on your teen’s mental health

There are subtle changes that take place that are not normal for teens and red flags for parents to be aware of. Psychotherapist Mary Jo Rapini shares six concerning behaviors and signs that a parent should get involved.

Overseen by Dr. David Lakey, vice chancellor for health affairs at The University of Texas System, the consortium brings together providers and experts from higher ed institutions around the state to identify students in schools who need help, connect them with providers through telemedicine and regularly consult on cases to make sure the child gets the needed treatment.

Lakey, a former state health commissioner, said that in spite of the omission of new dollars from the higher ed board’s request, he anticipates a "substantial increase" for the next biennium after Abbott, in response to the shooting in Uvalde, directed the program to expand statewide. Currently, the program is operating in 365 of the state’s 1,200 school districts.

But Lakey said the consortium hasn’t landed on a specific amount for new dollars it might need, either.

"We aren’t a state agency, and our requests aren’t made through legislative appropriations requests" like those filed by Texas’ health and human services department and other agencies, Lakey said. "It is in conversations with legislators and working with them to make sure that they feel comfortable with the work that’s being done and the price tag for that work. I’m a little hesitant to throw a number out there, just because I want the Legislature to be able to think through those conversations and what it’s going to take to get us to where we need to be."

Disclosure: Texans Care for Children and University of Texas System have been financial supporters of The Texas Tribune, a nonprofit, nonpartisan news organization that is funded in part by donations from members, foundations and corporate sponsors. Financial supporters play no role in the Tribune's journalism. Find a complete list of them here.

The Texas Tribune is a nonprofit statewide news organization dedicated to keeping Texans informed on politics and policy issues that impact their communities. This election season, Texans around the state will turn to The Texas Tribune for the information they need on voting, election results, analysis of key races, and more. Get the latest.

The Texas Tribune is a member-supported, nonpartisan newsroom informing and engaging Texans on state politics and policy. Learn more here.