A Spanish man trekking from Madrid to Doha for the 2022 FIFA World Cup has not been heard from since the day after he crossed into Iran three weeks ago, his family said Monday, stirring fears about his fate in a country convulsed by mass unrest.

The experienced trekker, former paratrooper and fervent soccer fan, 41-year-old Santiago Sánchez, was last seen in Iraq after hiking through 15 countries and extensively sharing his journey on a popular Instagram account over the last nine months.

Sánchez's family last heard from him on Oct. 2, a day after he crossed the Iraq-Iran border.

"We are deeply worried, we can’t stop crying, my husband and I," his mother, Celia Cogedor, told The Associated Press.

Cogedor and Sánchez's father, Santiago, sat next to the fireplace at the family’s home in a hamlet in central Spain. Clearly exhausted, the couple shared with journalists the treasured last audio message their son sent them that morning, allegedly already from Iranian soil, detailing his future plans.

"I’m with a friend who has come to pick me up. I’m going to go to Bandar Abbas, very far away 1,700 kilometers (1,056 miles) south in Iran, near the island of Hormuz," Sánchez's calm voice said.

The Spanish adventurer explained how he planned to go to Tehran, the Iranian capital, the following day, where a television station wanted to interview him. His next step would have been Bandar Abbas, a port in southern Iran where he would hop on a boat to Qatar. But all traces of him evaporated even before he reached Tehran, his parents think.

Sánchez had already warned his family before crossing into Iran that communication wouldn't be as easy as it had been in previous months.

"After a few days we didn’t worry about him not posting, it matched what he had said. But after 8 or 9 days, my daughter and his closest friends ... we already began to think that we had to report his disappearance," his mother said.

His parents reported him missing on Oct. 17, and they said Spain's police and diplomats were helping the family.

Spain's Foreign Ministry said it had no information about Sánchez's whereabouts, adding that the Spanish ambassador to Tehran was handling the matter. Calls to the Iranian Foreign Ministry seeking comment were not immediately returned.

This was not Sanchez's first time in Iran. In 2019 he biked a similar route to get from Madrid to Saudi Arabia.

His parents are proud of his adventurous spirit and say his only goals are to help others and promote the Real Madrid soccer team.

"He has not been making propaganda, neither for nor against any situation. The only thing that moves him is supporting Real Madrid, and walking to get on time to the World Cup in Qatar," they said.

Sánchez's reported disappearance in Iran comes as protesters are rising up across the Islamic Republic in the largest anti-government movement in over a decade. The demonstrations erupted on Sept. 16 over the death of Mahsa Amini, a 22-year-old woman taken into custody by Iran’s morality police for allegedly not adhering to the country’s strict Islamic dress code.

Tehran has violently cracked down on protesters and blamed foreign enemies and Kurdish groups in Iraq for fomenting the unrest, without offering evidence. The Iranian Intelligence Ministry said authorities had arrested nine foreigners, mostly Europeans, over their alleged links to the protests last month. Westerners and dual nationals have increasingly become pawns in Iran's internal political struggles and in tensions between Tehran and Western capitals, analysts say, with at least a dozen dual nationals arrested in recent years on disputed spying charges.

Sánchez arrived in Iraqi Kurdistan in late September, after trekking thousands of kilometers (miles) carrying a small suitcase in a wheeled cart, packed with little more than a tent, water purification tablets and a gas stove for his 11 months on the road. He said he wanted to learn how others lived before reaching Qatar, the first World Cup host country in the Arab world, in time for Spain's first match on Nov. 23. 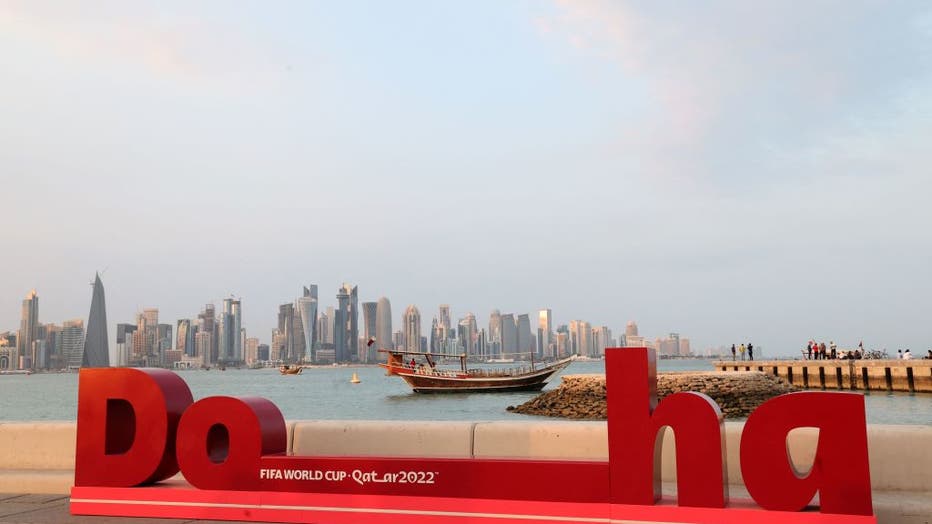 A picture taken on October 15, 2022 shows a view of the Qatari capital Doha, as the Gulf emirate prepares for the FIFA 2022 football World Cup. (Photo by Giuseppe CACACE / AFP) (Photo by GIUSEPPE CACACE/AFP via Getty Images)

"The idea of the journey is to motivate and inspire other people to show that they can go very far with very little," he told the AP from Sulaymaniyah, a Kurdish city in northeastern Iraq.

The day before he disappeared, Sánchez had breakfast with a guide in Sulaymaniyah. The guide, who spoke on condition of anonymity for fear of reprisals, said he tried to warn Sánchez about the dangerous political situation in Iran.

But Sánchez was undeterred and confident, the guide said.

"He didn't look nervous at all. He told me, ‘I sorted out everything, don’t worry,’" he said.

Sánchez, the guide added, planned to meet an Iranian family in the Kurdish town of Marivan — a scene of recent anti-government protests. The family, delighted by Sánchez's Instagram posts, had offered to host him.

After Sánchez crossed the border on Oct. 1, his messages became sparse and cryptic, the guide said. Sánchez told him that things were "very different" in Iran from Sulaymaniyah, an Iraqi metropolis filled with parks and cafes.

"It's been a long story," his last message read.

In his last Instagram update, the night before he crossed the Iranian border, he posted images of his emotional farewell to Iraq and told of a Kurdish family's generosity. He had planned to camp on a mountain, but the owner of a nearby farm took him in, giving him a bed, a shower and a hearty dinner.

Pictures on Instagram show him eating bread and chicken soup, smiling and posing with young boys from the village and drinking tea over an open fire.

"Conclusion:" he wrote. "Lose yourself to find yourself."