Elijah Rising, a shelter for human trafficking victims in the greater Houston area, is in need of help after the winter storm caused tens of thousands of dollars in damages.

HOUSTON - It would be four days until Clarissa Fraser and the residents under her care would get power after they lost it on Sunday. It was Febuary 14, 2021 -- the start of the historic winter storm in Texas.

Shortly after the power went out, they lost water, too.

"Our well runs on power. We lost water on Sunday night," Clarissa recalled. She's the residential manager at a shelter run by Elijah Rising. The Houston-area non-profit provides faith-based programming for survivors of sex trafficking.

The water is still out.

The pipes burst inside the shelter and the organization's other homes on the property are being renovated to house more survivors. There are also multiple leaks in the underground pipes.

She explains they have to replace 900 feet of pipe from the well that provides water to the five homes on the property. The repairs she says are up to $100,000. Insurance is only expected to cover half.

The residents were placed in a temporary rental while the repairs are done.

"We having to rent another property, month by month, because this project is so extensive," Micah added.

The organization is looking to the community to help fund the repairs and get the residents back in to the shelter where they found refuge.

"When you're in a comfortable setting, you can become confident in yourself and your brain can begin to heal," Clarissa explained.

She also describes the emotional toll the winter storm experience is having on survivors -- the experience compounded trauma on more trauma. 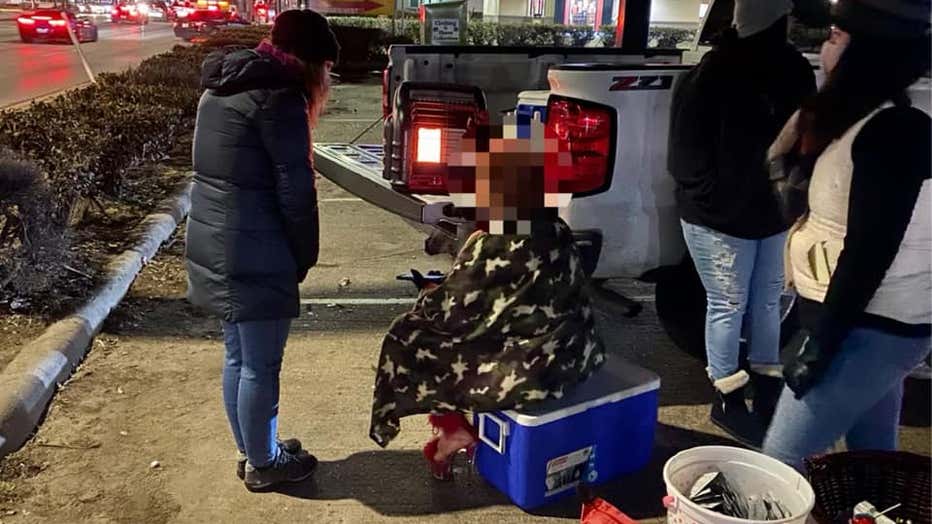 Elijah Rising volunteers give a blanket to a possible victim of sex trafficking during February's winter storm.

"When you get in those stressful situations, that's when the worst comes out and all of those like fears that you have like what's going to happen," she told FOX 26.

She says the darkness from losing power, having to huddle together for warmth, and dwindling supplies like water and generator fuel were triggers for some survivors.

The road to get to the shelter in a rural part of Greater Houston was iced over and help could not arrive until Thursday.

Still Clarissa says, she believes, God was looking after them.

"I think we had the little generator that could because like I would fill it up and it lasted longer than I thought it could," she said smiling.

To see how you can help the organization, click here.

Micah adds during the bitter cold, victims were still being trafficked on Houston streets.