Princess Diana statue unveiled on what would've been her 60th birthday

Princes William and Harry unveiled the statue for their mother, the late Princess Diana, at Kensington Palace in London on what would have been Diana's 60th birthday. Diana tragically died on Aug. 31, 1997, in a car crash in Paris, France.

LONDON - Prince Harry has described his relationship with Prince William as "space," but on Thursday, the brothers joined together to unveil a statue of Princess Diana.

In honor of what would have been their mother’s 60th birthday, the siblings reunited at Kensington Palace to unveil the statue, which was commissioned years ago. Diana’s three siblings joined the brothers for the private ceremony in the Sunken Garden at London’s Kensington Palace, a place the princess once found solace.

The statue shows a larger-than-life Diana surrounded by three children. Her likeness sports a style of her dress meant to evoke the final period of her life, when she gained confidence in her humanitarian work.

"Today, on what would have been our mother’s 60th birthday, we remember her love, strength and character – qualities that made her a force for good around the world, changing countless lives for the better," William and Harry said in a joint statement. "Every day, we wish she were still with us, and our hope is that this statue will be seen forever as a symbol of her life and her legacy." 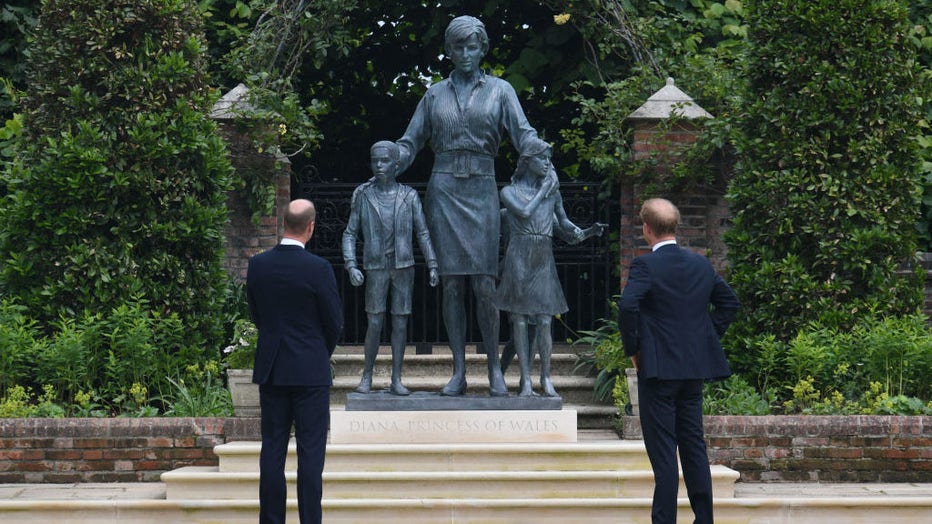 Britain's Prince William, Duke of Cambridge (L) and Britain's Prince Harry, Duke of Sussex unveil a statue of their mother, Princess Diana at The Sunken Garden in Kensington Palace, London on July 1, 2021, which would have been her 60th birthday. (Ph

Diana died in a car crash in Paris when William was just 15 and Harry was 12. Before her death, she endeared herself to the public at home and abroad.

Diana often visited the poor, knelt to the eye level of children, sat on the edge of patients’ hospital beds, wrote personal notes to her fans and even touched a child infected with AIDS during a time when many believed the disease to be transmissible through touch.

According to the Associated Press, she once walked through a cleared path in an old minefield. When she learned the photographers documenting the moment hadn't gotten the shot they needed, she turned around and did it again.

Later that day, she met with victims of landmines, including a young girl who had lost her left leg.

Her death broke the heart of the nation, her sons’ most of all. During an interview with Oprah Winfrey earlier this year, Harry said he and William had "been through hell" together when describing the trauma of losing their mother.

But Harry also used that interview to shed light on a rift in the brothers’ relationship. Harry addressed what led to his and his wife Meghan’s departure from royal duties.

He accused the British media of attacking Meghan for things William’s wife Kate was often praised for. He accused Buckingham Palace of not doing enough to protect Meghan from media smears. And he accused some members of the House of Windsor of racism — claiming that a relative expressed concerns over what color his son Archie’s skin would be.

Following that interview, William told a reporter the Windsors were "very much not a racist family." And the palace issued a statement saying, "issues raised, particularly that of race, are concerning."

"Harry, Meghan and Archie will always be much loved family members,’’ the statement said.

The two princes put aside their differences in April while attending the funeral of their grandfather, Prince Philip. But according to biographer Robert Lacey, the feud proved far from over in the immediate aftermath.

He said they argued inside St. George’s Chapel mere minutes after cameras captured the two speaking outside.

"The conflict between Diana's two bitterly divided sons does not seem likely to end any time soon," Lacey told the Daily Mail, adding that friends and family were trying to forge a reconciliation.

This story was reported from Atlanta. Kelly Hayes and the Associated Press contributed to this report.