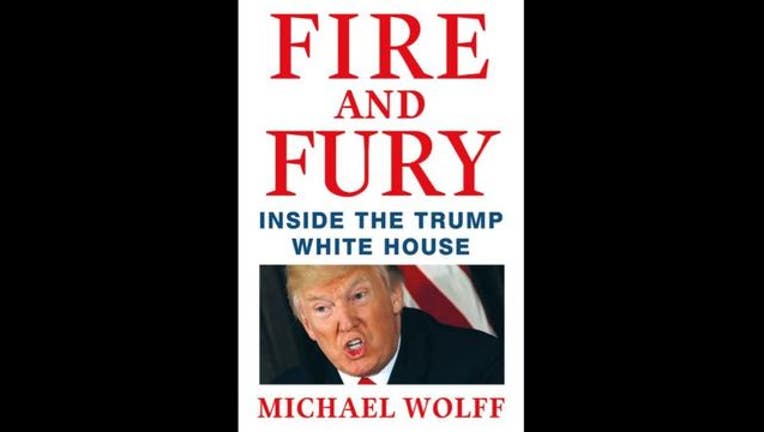 WASHINGTON, DC - White House spokeswoman Sarah Huckabee Sanders is continuing to slam an explosive new book about President Donald Trump's first year in office. The tell-all about the White House was rushed to the bookshelves, to go on sale Friday, despite President Trump's legal team demanding an immediate halt to its publication.

“Due to unprecedented demand, we are moving the on-sale date for all formats of 'Fire and Fury,' by Michael Wolff, to Friday, January 5, at 9 a.m. ET, from the current on-sale date of Tuesday, January 9,” a spokesman for publisher Henry Holt and Company told Fox News in an email.

After news broke that the publishers were moving up publication, Wolff tweeted: “Here we go. You can buy it (and read it) tomorrow. Thank you, Mr. President.

Earlier Thursday, a lawyer for the president sent a letter to Wolff and the book’s publisher demanding the halting of the book's publication and "a full and complete retraction and apology."

“Mr. Trump hereby demands that you immediately cease and desist from any further publication, release or dissemination of the book,” the attorney, Charles J. Harder, wrote in the letter obtained by Fox News.

The publisher on Thursday confirmed receiving the cease-and-desist letter and stood by the book.

"We see 'Fire and Fury' as an extraordinary contribution to our national discourse, and are proceeding with the publication of the book,” Henry Holt and Company said.

The book, obtained by Fox News, is an unflattering portrait of Trump and claims many of the president's top advisers disparage him in private.

Excerpts published this week led the president to issue a rare, blistering takedown of former adviser Steve Bannon, who is quoted throughout the book and takes swipes at the President’s family.

In the book, Bannon refers to a campaign meeting between the president’s son, Donald Trump Jr., and a Russian lawyer as “treasonous” and “unpatriotic.”

Bannon is also quoted dismissing Trump's daughter Ivanka Trump by saying: “She became a White House staffer and that’s when people suddenly realized she’s as dumb as a brick.”

The book also makes other claims, including that the president eats McDonald's food because he fears being poisoned and that he passed on naming former U.N. Ambassador John Bolton for an administration role because he didn't like his mustache.

Wolff wrote that the book was based on conversations that took place over 18 months, beginning with a Beverly Hills meeting he had with Trump the 2016 election. He said he conducted more than 200 interviews, after taking up “something like a semi-permanent couch in the West Wing.”

Among other claims in the book: Wolff says the president and First Lady Melania Trump spend relatively little time together. Trump, according to Wolff, also told his wife there was simply no way he would win – something the White House strongly pushed back against Thursday.

The book also claims Bannon doubts Trump will make it through his four years as president – much less a second term.

“He’s not going to make it,” Bannon said, according to Wolff. “He’s lost his stuff.”

On Thursday, Trump allies, claiming it's full of falsehoods, focused their attacks on the book itself, and the author.

Sanders added that it was “sad,” “pathetic,” and a “fantasy.”

Others in the administration also took aim at the book Thursday.

“We have become used to #FakeNews, now we have #FakeBooks!” Secretary of the Treasury Steven Mnuchin tweeted.

On Wednesday, after excerpts of the book began to make waves, the White House released a four-paragraph statement from Trump downplaying Bannon’s contributions to his campaign and administration and claiming he had “lost his mind.”

“Steve Bannon has nothing to do with me or my presidency,” Trump wrote. “When he was fired, he not only lost his job, he lost his mind. Steve was a staffer who worked for me after I had already won the nomination by defeating seventeen candidates, often described as the most talented field ever assembled in the Republican Party.”

In a story for the Hollywood Reporter on Thursday, Wolff explained how the book came to fruition, saying he had access to top officials inside the administration, including Trump himself.

Wolff said he asked Trump for permission to spend time hanging out inside the West Wing -- a request, he said, Trump did not deny, which may have caused confusion for senior aides.

“Since the new White House was often uncertain about what the president meant or did not mean in any given utterance, his non-disapproval became a kind of passport for me to hang around,” Wolff wrote.