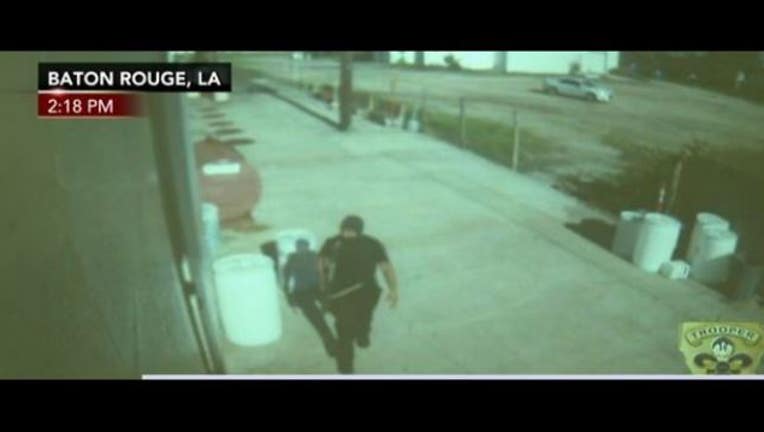 SAN DIEGO (AP) — Back-to-back attacks on police in Texas and Louisiana by former military men have touched a nerve among veterans who traditionally share a close bond with law enforcement.

Seeing one Marine kill another Marine after both had returned home safely from the battlefield in Iraq has been especially painful for the military's smallest branch, which considers service life-long membership among a force whose official motto is: "Semper Fidelis," or "Always Faithful."

"In the Marine community, we don't believe in 'ex-Marines'. However that is not the case when one decides to break the moral and ethical values we hold dear. The ex-Marine that opened fire on officers is everything we swear to protect our Nation from," Marine Cpl. Eric Trichel wrote on a Facebook page with about 25,000 mostly Marine members.

In an email to The Associated Press, he emphasized he was not speaking on behalf of the Marine Corps.

Many veterans fear the service records of the gunmen will feed a false perception that combat veterans are volatile and violent, turning back years of efforts to change such stereotypes.

The Baton Rouge shooting came less than two weeks after five Dallas police officers were killed in an ambush by an Army Reserve veteran who had served in Afghanistan.

Gavin Long was based in San Diego with the Marine Corps from 2005 to 2010, according to military records.

He was deployed in 2008 for about eight months to Iraq as a data network specialist. People in those jobs are technicians dealing with computers and generally do not see combat.

One of his victims, 41-year-old Matthew Gerald, was a former Marine who enlisted in the Army after the Sept. 11 attacks and also served in Iraq in 2009.

And the Dallas victims included a Navy veteran who did three tours in Iraq.

It is not uncommon for military veterans to join police forces and vice versa. Both jobs offer a strong sense of teamwork and reliance on others in life-or-death situations — in platoons and out on patrol.

Marines in particular carry an almost religious zeal for their branch of the military that they compare to an exclusive brotherhood.

"Seeing the gunman in Baton Rouge brought a certain stinging embarrassment to something I hold very dear, being a United States Marine," said former Marine Staff Sgt. Chad M. Robichaux, who also worked as a law enforcement deputy for the St. Charles Parish Sheriff's Office, about an hour's drive from Baton Rouge.

Robichaux said he was proud of the police victims who served in combat zones, so the shooting "tears you both ways." One of the slain Dallas officers was a military contractor who worked in Iraq and Afghanistan.

Robichaux was a Force Recon Marine — the Marine equivalent of a Navy SEAL — and said both gunmen seemed to effectively use the element of surprise in their attacks but that he has seen no evidence they were highly trained killers.

There also is no evidence that has been made public suggesting either gunmen suffered from post-traumatic stress, said Robichaux, who runs the Mighty Oaks Warrior Programs that helps veterans deal with the syndrome known as PTSD. But he said he wished he had met Long while both were posted in Southern California.

"There's no excuse for what he did and I'm not sympathizing with him, but he was obviously hurting in some capacity and needed help," he said. "Somebody may have been able to show him a different way."

The military prides itself on its race relations and its history of opening jobs to blacks long before other institutions. Troops often say their only color is "green."

Marine veteran Elvin Carey, who is black, said he had no doubts both of the gunmen endured racism in and out of the military.

Carey, 31, said he also confronted racism in the service, with tension easing in combat but racist comments resuming after he returned to the U.S. The decorated Marine sergeant said he was asked at his first job out of the military if he was a high school dropout and had been in a street gang.

"I understand his frustration but I'm disgusted by what he did," the Iraq veteran said of Long. "Anywhere you go, for the rest of your life, every Marine is your brother so that's why I feel more ashamed of it."