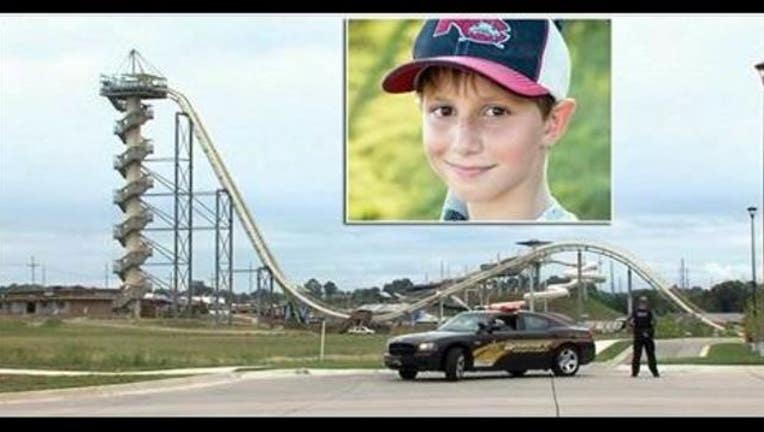 KANSAS CITY, Mo. (AP) — A Kansas waterslide billed as the world's tallest remained off-limits Monday as authorities pressed to figure out how a state lawmaker's 10-year-old son died of a neck injury while riding it.

Details remained murky about what happened Sunday to Caleb Thomas Schwab on the 168-foot-tall "Verruckt" — German for "insane" — that since its debut two years ago has been the top draw at Schlitterbahn Waterpark in Kansas City, Kansas.

Kansas City, Kansas, police issued a statement late Monday afternoon saying that Caleb suffered a fatal neck injury around 2:30 p.m. while he was riding the slide with two women, neither of whom was related to him. They suffered minor facial injuries and were treated at an area hospital, police said.

Emergency responders arrived to find the boy dead in a pool at the end of the ride, according to the statement, which offered no further details.

In a statement Monday afternoon, Schlitterbahn said it was "deeply and intensely saddened for the Schwab family and all who were impacted by the tragic accident." The park was tentatively scheduled to reopen Wednesday, but "Verruckt is closed," according to the statement.

Officer Cameron Morgan, a police spokesman, said no police report about the incident was available. He said investigators were treating Caleb's death as a "civil matter" rather than a criminal one and referred additional questions to the park.

Schlitterbahn spokeswoman Winter Prosapio declined interview requests Monday but told reporters a day earlier that Caleb had been at the park with family members, adding that "we honestly don't know what's happened."

It wasn't immediately clear whether results of an autopsy Monday on Caleb would be publicly released or, if so, how soon, said Margaret Studyvin with the Wyandotte County coroner's office.

Leslie Castaneda, who was at Schlitterbahn on Sunday, told The Kansas City Star that she saw Caleb's crumpled shorts or bathing suit at the bottom of the ride, along with blood on the slide's white descending flume.

"I'm really having a tough time with it. I really am," said Castaneda, of Kansas City, Kansas. "I saw his (Caleb's) brother. He was screaming."

On the waterslide certified by Guinness World Records as the world's tallest, riders sit in multi-person rafts during "the ultimate in water slide thrills," subjecting "adventure seekers" to a "jaw dropping" 17-story drop, the park's website says. Passengers then are "blasted back up a second massive hill and then sent down yet another gut wrenching 50 foot drop," the website adds.

Each rider must be at least 54 inches tall, and the group's weight is limited to a total of 400 to 550 pounds. Authorities didn't release information about Caleb's height or the combined weight of his group of riders.

According to rules sent to the media in 2014, riders had to be at least 14 years old, but that requirement is no longer listed on the park's website.

Caleb's parents — Republican state Rep. Scott Schwab and his wife, Michele — have requested privacy as the family grieves, saying in a statement Sunday that "since the day he was born, (Caleb) brought abundant joy to our family and all those he came in contact with."

"As we try to mend our home with him no longer with us, we are comforted knowing he believed in our Savior Jesus, and they are forever together now. We will see him another day," the statement added.

The tragedy happened on a day the park offered lawmakers and other elected officials a buffet lunch, hot dogs and hamburgers.

Verruckt's 2014 opening repeatedly was delayed, though the operators didn't explain why. Two media sneak preview days in 2014 were canceled because of problems with a conveyor system that hauls 100-pound rafts to the top of the slide.

In a news article linked to the news release announcing a 2014 delay, Schlitterbahn co-owner Jeff Henry told USA Today that he and senior designer John Schooley had based their calculations when designing the slide on roller coasters, but that didn't translate well to a waterslide like Verruckt.

In early tests, rafts carrying sandbags flew off the slide, prompting engineers to tear down half of the ride and reconfigure some angles at a cost of $1 million, Henry said.

A promotional video about building the slide includes footage of two men riding a raft down a half-size test model and going slightly airborne as it crests the top of the first big hill.

The Unified Government of Kansas City, Kansas, and Wyandotte County said it does not inspect the operations of such rides and is responsible only for ensuring they've adhered to local building codes.

Without specifically mentioning waterslides, Kansas statutes define an "amusement ride" as any mechanical or electrical conveyance "for the purpose of giving its passengers amusement, pleasure, thrills or excitement." Such rides, by statute, commonly are Ferris wheels, carousels, parachute towers, bungee jumps and roller coasters.

State law leaves it to the Kansas Department of Labor to adopt rules and regulations relating to certification and inspection of rides, adding that a permanent amusement ride must be scrutinized by "a qualified inspector" at least every 12 months. Kansas' Labor Department didn't return messages Monday.

Prosapio said Sunday the park's rides are inspected daily and by an "outside party" before the start of each season.

Kansas state Sen. Greg Smith, an Overland Park Republican, said that although state law doesn't specifically address waterslides, it's clear they "would fall into that category." He called any potential legislative response to Sunday's tragedy premature, saying the investigation should be given time to play out.