WASHINGTON - A panel of advisers to the U.S. Centers for Disease Control and Prevention on Thursday continued discussing specific recommendations about who should get Pfizer’s COVID-19 booster shot — and when — following a sign-off by the U.S. Food and Drug Administration for certain Americans.

The FDA on Wednesday evening authorized the booster doses for those 65 and older, younger adults with underlying health conditions and those in jobs that put them at high risk for COVID-19. But more regulatory hurdles lie ahead before the dispensing of boosters can begin — including the CDC panel’s recommendations and an eventual sign-off by that agency as well.

The CDC’s Advisory Committee on Immunization Practices (ACIP) meeting and eventual vote, which will continue through Thursday afternoon, is being streamed online.

U.S. regulators will decide at a later date on boosters for people who have received the Moderna or Johnson & Johnson vaccines. They indicated the Pfizer shots would not be recommended for people who got a different brand of vaccine initially.

The priority still is vaccinating the unvaccinated "here in America and around the world," CDC Director Dr. Rochelle Walensky told the meeting on Thursday.

She acknowledged that the data on boosters "are not perfect."

"Yet collectively they form a picture for us," Walensky said. "And they are what we have in this moment to make a decision about the next stage in this pandemic."

The COVID-19 vaccines used in the U.S. still offer strong protection against severe illness, hospitalization and death, but immunity against milder infection appears to be waning months after people’s initial vaccination.

The FDA has approved third shot of the Pfizer-BioNTech COVID-19 vaccine to serve as a booster for certain groups.

The CDC’s ACIP first convened Wednesday for discussions, reviewing data on the safety and effectiveness of Pfizer’s booster dose. Some experts were so perplexed by the questions surrounding the rationale for boosters that they suggested putting off a decision for a month in hopes of more evidence.

The uncertainties were yet another reminder that the science surrounding boosters is more complicated than the Biden administration suggested when President Joe Biden and his top aides rolled out their plan at the White House last month. Officials had hoped to give booster shots to nearly all American adults in an effort to shore up protection amid the spread of the highly contagious delta variant.

The FDA decision on Wednesday was expected after the agency’s own panel of advisers last week overwhelmingly rejected the Biden plan. The panel instead recommended boosters only for those most vulnerable to severe cases of COVID-19.

Under the FDA authorization, vaccinated Americans are eligible for a third dose six months after receiving their second Pfizer shot. That's different than the Biden proposal announced in August, which called for boosters after eight months.

FDA acting commissioner Dr. Janet Woodcock said in a statement that the FDA authorization would allow for boosters in health care workers, teachers, grocery workers and those in homeless shelters or prisons.

"As we learn more about the safety and effectiveness of COVID-19 vaccines, including the use of a booster dose, we will continue to evaluate the rapidly changing science and keep the public informed," Woodcock said.

The timing of the FDA decision was highly unusual given that the agency typically takes action before the CDC convenes its own experts. 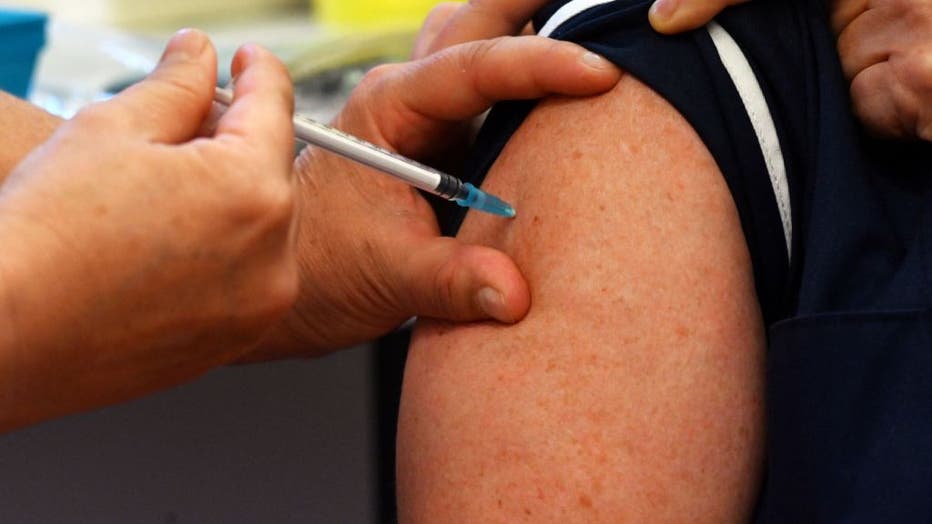 FILE - A nurse administers a dose of a Pfizer booster vaccine at a vaccination center in Derby, England on Sept. 20, 2021.(Photo by PAUL ELLIS/AFP via Getty Images)

During the ACIP’s first day of discussions, the CDC panelists heard a series of presentations outlining what’s known about boosters. On one hand, the COVID-19 vaccines continue to offer strong protection against severe illness, hospitalization and death. On the other hand, there are signs of more moderate "breakthrough" infections among the vaccinated as immunity wanes.

The CDC advisory panel had been considering boosters for senior citizens, nursing home residents and front-line health care workers, rather than all adults. But many members warned during the two-day meeting that the priority of the vaccination campaign should be the protection against severe disease, not infection.

They also wrestled with how to tell when a booster is needed. While an extra dose revs up numbers of virus-fighting antibodies, those naturally wane over time and no one knows how long the antibody boost from a third Pfizer dose will last -- or how much protection it really adds since the immune system also forms additional defenses after vaccination.

The U.S. has already authorized third doses of the Pfizer and Moderna vaccines for certain people with weakened immune systems, such as cancer patients and transplant recipients.

President Joe Biden will get COVID-19 booster on camera

During Monday morning's press briefing, White House press secretary Jen Psaki said the president plans to get his COVID-19 booster shot on camera but did not say when.

The across-the-board rollout of boosters proposed by the White House was supposed to have begun this week. Some questioned whether President Joe Biden had gotten ahead of the science by announcing his plans before government regulators had reached any conclusions.

Despite the resistance in recent days, some top U.S. health officials said they expect boosters to eventually win broader approval in the coming weeks or months. Dr. Anthony Fauci said over the weekend that "this is not the end of the story."

The U.S. is dispensing around 760,000 vaccinations per day on average, down from a high of 3.4 million a day in mid-April. About 180 million Americans are fully vaccinated, or 64% of those who are eligible, CDC data shows.

Meanwhile, the U.S. booster plan has also raised ethical concerns about the fate of people in impoverished parts of the world. The World Health Organization and other global health advocates are opposed to wealthy nations dispensing a third round of shots when poor countries don’t have enough vaccine supply for their first doses.

President Joe Biden convened a virtual COVID-19 global summit and announced the U.S. is doubling its purchase of Pfizer's COVID-19 shots to share with the world to 1 billion doses on Sept. 22, 2021.

But the Biden administration has argued that the plan is not an us-or-them choice, noting that the U.S. is supplying large quantities of vaccines to the rest of the globe. This week, the president announced that the U.S. is doubling its purchase of Pfizer's COVID-19 shots to share with the world to more than 1 billion doses.

The U.S. purchase of another 500 million shots brings the total U.S. vaccination commitment to more than 1.1 billion doses through 2022. About 160 million shots supplied by the U.S. have already been distributed to more than 100 countries, representing more donations than the rest of the world combined. The remaining American doses will be distributed over the coming year.

"To beat the pandemic here, we need to beat it everywhere," Biden said Wednesday. He added that with the new commitments, "For every one shot we've administered to date in America, we have now committed to do three shots to the rest of the world."