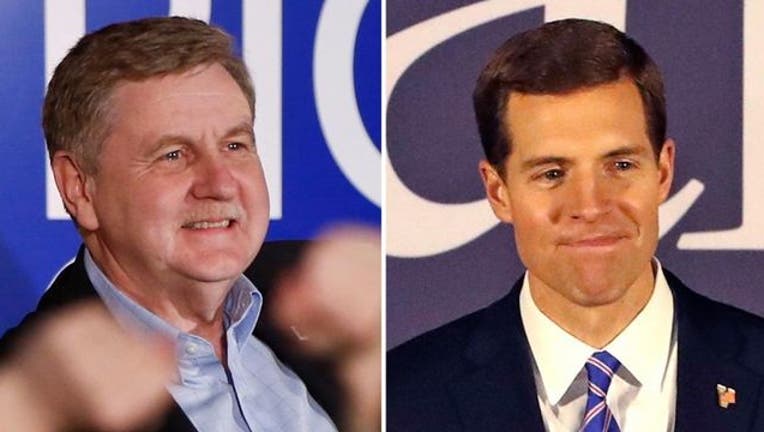 WASHINGTON D.C. - The message to Republicans from the Pennsylvania special election was simple: Almost no one is safe.

Rattled Republicans were hit with a day-after reality check Wednesday after the startlingly strong performance of a fresh-faced Democrat deep in Trump country.

House Speaker Paul Ryan privately warned his ranks that the election, still officially undecided, should serve as a "wake-up call" as the party tries to defend its majorities in Congress this fall. Democrats boasted optimistically of an impending wave, and produced a new list of races that suddenly seemed within reach.

Even as ballot counting dragged on with several hundred votes separating Democrat Conor Lamb from Republican Rick Saccone, it was clear the single, short-term contest in western Pennsylvania had sounded the starting gun for the battle for control of the House.

Republicans looking for lessons found several. Candidates matter. Campaigns, too. And fundraising. President Donald Trump can't save them, it seems, not even in a coal-and-steel region he carried by nearly 20 percentage points just 16 months ago.

Trump won more than 100 districts nationwide by narrower margins than that, arguably making them comparably competitive now. Democrats produced an updated watch-list Wednesday of GOP representatives they suggested might want to think about retirement.

In Pennsylvania, the tally of absentee ballots ate into Lamb's lead slightly, though analysts doubt Saccone will make up the deficit. Officials have seven days to count provisional ballots, and either side can ask for a recount. The Associated Press has not declared a winner.

"Obviously, this is a very tough environment for Republicans," said Courtney Alexander, a spokeswoman for the Ryan-aligned Congressional Leadership Fund, which supports GOP candidates for the House. "Now more than ever, candidates and campaigns matter."

Publicly, Republican officials sought to downplay the outcome as a one-off that won't be replicated as they protect their majority nationwide this fall, especially if voters start to see benefits from the GOP tax bill in paychecks.

They portrayed Lamb, the 33-year-old former prosecutor, as a unicorn-like figure in the Democratic Party whose centrist views - support of gun owner rights, personal opposition to abortion and refusal to back Nancy Pelosi as House floor leader - would not be replicated in other races.

With so many Democrats revved up to run in so many House districts across the country, both sides are expecting a brutal primary season. Republicans are counting on that ending up in their favor, with Democrats nominating more-liberal candidates who won't survive general elections against GOP rivals.

"The primaries bring them to the left," Ryan told reporters, and the prospect of more centrist Democratic candidates like Lamb "is something that you're not going to see repeated."

But Democrats, and many outside observers, say Trump's inability to pull Saccone to victory, after swooping in for a rousing campaign rally days before the election, shows the limits of presidential persuasion and the GOP brand.

Trump still wows the crowds. But the president's supporters are not necessarily a lock for Republican candidates. Saccone stumbled by relying on Trump's coattails and failing to raise enough money to push his own message, strategists said.

House Minority Leader Pelosi told Democrats at the Capitol to forget about Trump and concentrate on their own message of what Democrats can do for voters if they wrest control of the majority this fall.

"We said it over and over: It's not about Trump," Pelosi privately told House Democrats, according to someone who was in the room.

"Just tell people what you have in your heart and in your plan for them," she told the AP later.

The White House insists GOP candidates shouldn't shy away from the president. Trump's people say he boosted Saccone beyond what the Republican could have accomplished on his own.

"Candidates that embrace the president going into this fall we think will have a better prospect," said White House spokesman Raj Shah. Trump's campaigning for Saccone, "turned what was a deficit for the Republican candidate to what is essentially a tie."

But Lamb showed Democrats that there's a path through Trump country by focusing on economic issues much the way Doug Jones did to win the special election Senate seat in Alabama in December.

And Democrats contend the young Pennsylvanian is hardly a "unicorn" with his moderate views and military background. There are plenty of others, they say.

As House Republicans huddled privately at campaign headquarters across from the Capitol, Ryan told them they need to "get to work," fundraise and not take anything for granted, acknowledging the enthusiasm among Democrats.

Republicans have been counting on the GOP tax bill, with follow-up announcements of bonuses or bigger take-home pay, to push voters to their side. But results so far are mixed. They have few other big-ticket accomplishments for the campaign trail, having failed in efforts to repeal the Affordable Care Act.

To promote the tax cuts, the Ryan-aligned American Action Network has poured $30 million into ads in 40 House districts since fall. More spending is expected.

But even in Trump country, Republican lawmakers are "very cautious, concerned," said Rep. Frank Lucas, R- Okla. "They understand that we are in potentially a challenging year. They're cautious in how they're preparing for it, and they're taking it seriously."