More than 400,000 people across the Houston area are without power, but CenterPoint says crews are working to get things back up and running. Brad Tutunjian, CenterPoint VP of Distribution Operations, discusses restoration efforts.

HOUSTON - Hundreds of thousands of customers were left without power on Tuesday as Nicholas moved across Southeast Texas, and utility companies are still working to restore electricity to some.

At one point on Tuesday morning, more than half a million customers were experiencing outages. That number dropped to about 115,000 by Tuesday night, and about 53,000 still didn't have power on Wednesday night.

Here are the latest power outage numbers as of 5:20 p.m. Thursday:

- Entergy Texas is reporting 1,160 customers are currently without power.

Utility companies work to restore services in wake of Nicholas

Centerpoint says it deployed 3200 people across the region, plus mutual aid from other areas, to work on restoring the power. The company says it expected the storm to be more of a 'rain-event', rather than wind that would knock-out power. They expect most damage to be in transmission lines, where the electricity goes into homes and neighborhoods.

Centerpoint Energy says they have made significant progress restoring power to affected customers in the Greater Houston area and surrounding communities.

In a statement on Tuesday morning, CenterPoint Energy said its crews had begun their damage assessment and service restoration process. The company said electric system assessments would be completed Wednesday, and they expected outage numbers to continue to decline.

RELATED: After the storm, utility companies work to restore electricity 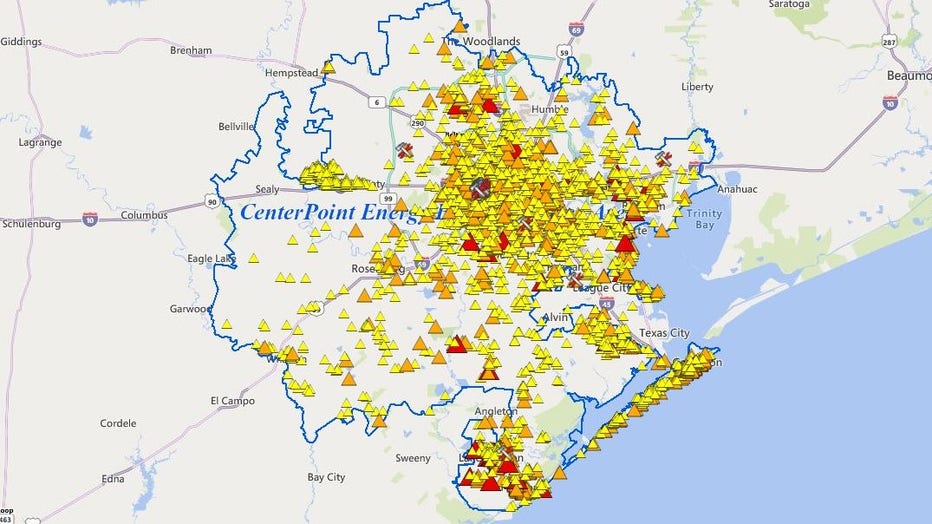 CenterPoint Energy said Tuesday that the restoration process would begin with facilities vital to safety, health and welfare, such as hospitals, water treatment plants, and public service facilities before moving on to other customers.

The company requested help from its electric utility mutual assistance program to assist with restoration efforts, which includes access to thousands of linemen and tree trimmers.

Meanwhile, CenterPoint Energy said customers do not need to call to report outages, but should call if they smell natural gas or see a damaged line.

CenterPoint Energy says the storm may have caused damage to customer-owned equipment, such as their meter box or weatherhead – the point where the line enters the home through a pipe. In those cases, customers will need to contact a qualified electrician to make sure the damage is repaired before the company is able to restore service to them.

Ahead of landfall, ERCOT, the Electric Reliability Council of Texas, which manages the flow of electric power to more than 26 million Texas customers, was preparing the grid to maintain reliability in the face of severe weather conditions.

In a statement, ERCOT said power outages caused by the storm "will most likely be at the local distribution level. Local outages can be caused by factors ranging from high winds toppling power poles to tree limbs falling on power lines."