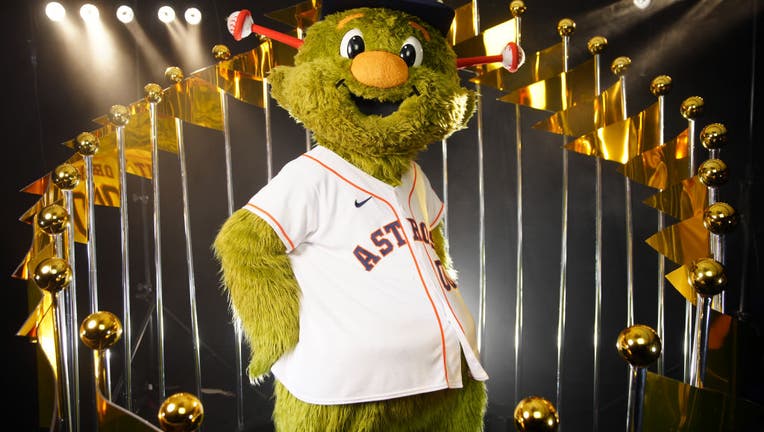 HOUSTON - As the Houston Astros and Philadelphia Phillies prepare to play ball, another event will be happening at the same time. A very green and fuzzy one at that.

Sporting teams are known for their mascots, and the two MLB teams in tonight's World Series match-ups have two of the best mascots in the league: Orbit and Phillie Phanatic.

The two mascots are a lot alike. They're both green, fuzzy, and are known for causing trouble.

Orbit came to be during the 1990 season all the way until the 1999 season. He was replaced by Junction Jack when the team moved from the Astrodome to Minute Maid Park. Orbit returned as the team's mascot in 2012. The Space City mascot is a lime-green, fuzzy, alien wearing an Astros jersey with antennae that extend into baseballs. He gets his name from Houston's association with NASA.

ASTROS: Houston Astros have never won the first game of the World Series

Orbit has kept to giving back to the community, especially children. In fact, the mascot is said to be named and designed from the suggestions of Houston area schoolchildren. More than 10,000 kids drawings were submitted to the Astros as possible designs and the final design was a composite of the various drawings given.

FOX 26 Sports Director Mark Berman has the latest on Verlander's start for the Astros.

Orbit can even add author to their resume since he released his very first children's book in 2017 titled "Orbit's First Day of School". The book covers topics such as making new friends, how to handle bullies, embracing differences, celebrating strengths, and practicing respect.

Phillie Phanatic is also green and furry, but instead of an alien, he's a flightless bird with an extendable tongue. Phanatic has been a mascot for nearly 40 years as he made his first appearance in 1978. The mascot wears a Phillies Jersey with a star on the back. The Phanatic was designed by then Harrison/Erickson of New York City, now known as Acme Mascots, who had ties with Jim Henson's Muppets.

The mascot was named for the "fanatical fans of the team." and is widely known and most recognizable ballpark mascots. In fact, Phanatic was inducted into the Mascot Hall of Fame in 2005, which was founded by David Raymond, the original Phillie Phanatic from 1978 to 1993.

Sally. Melissa and Orbit talk to the FOX morning news anchors and fans in Philly

Phillie Phanatic also gives back to the Philadelphia community. The mascot has a "Phanatic About Reading" program presented by Xfinity that encourages students in Pre-K through 8th grade to read or be read to for a minimum of 15 minutes a day to improve their literacy skills. Incentives are provided and top-performing schools have a chance to receive a special experience with the Phanatic. Participating students are also given completion certificates and a ticket incentive at the end of the school year.

The two green mascots have definitely had their share of funny moments during their time on the field.

One of Phillie Phanatic's most talked about moment was when in 1988 he got into a mini fight with former  Dodger's manager Tommy Lasorda. Lasorda grew upset when Phanatic dressed a dummy in his jersey and got into a tug-of-war with the mascot over the dummy and repeatedly hit Phanatic with it.

Getting ready for Game 1

Orbit is also known for disrupting opposing players during their warmups. The mascot has incited light saber wars, had dolls representing the teams fight with Astros winning, and Orbit even had an ongoing troll war with former baseball catcher J.P. Arencibia, where they photoshopped his face on a Houston Texans cheerleader. Orbit has even gone streaking on the field at Minute Maid Park for their birthday.

It's unsure what kind of shenanigans the two mascots will get into for the World Series, but fans are no doubt in for some great moments as the two face off.

World Series Game 1 will have the first pitch at 7:03 p.m. You can watch the two teams play ball on FOX.