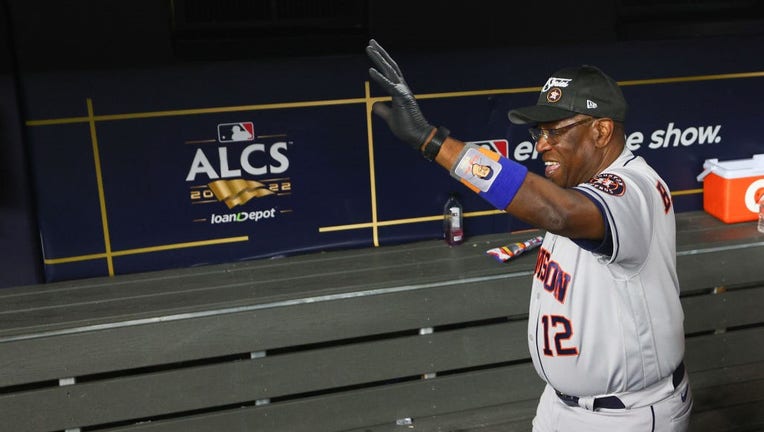 NEW YORK, NEW YORK - OCTOBER 23: Dusty Baker Jr. #12 of the Houston Astros celebrates after winning game four of the American League Championship Series against the New York Yankees to advance to the World Series at Yankee Stadium on October 23, 2022

Baker has spent a lifetime in baseball and loves to regale his team with tales of his experiences and exploits in the game. This week as the Astros prepared to meet the Philadelphia Phillies in the World Series beginning Friday night, his players shared some of their favorite stories.

Baker is famous for spinning yarns, and during his time with the Astros the 73-year-old skipper has mentioned everyone from John F. Kennedy Jr. to NBA great Bill Russell to reggae icon Bob Marley. But to his players, his best and most powerful stories are those about his interactions with many of the greatest players in major league history.

MORE:  Astros in the World Series 2022: Here's when they'll play the Phillies

"Pete Rose asked him, ‘What do you got today?’ And he said, ‘2 for 4, I’m fine,’" Maldonado said. "And Pete Rose told him: ‘So that means you’re giving up two at-bats before you go to the plate?’ That was really impressive to me."

Baker is making his third trip to the Series as a manager and hopes to win his first title. As a player, he went three times with the Los Angeles Dodgers, winning it all as a big-hitting left fielder in 1981.

He’s played with and managed some of the top names in the game during more than 50 years in baseball and has a great story about almost anyone he’s asked about. But perhaps the two players he loves talking about the most are Hank Aaron and Barry Bonds.

Baker was on deck and among the Braves congregated at the plate to celebrate with Aaron on April 8, 1974, when he hit his 715th home run to pass Babe Ruth for the career record since broken by Bonds.

Baker managed Bonds for 10 seasons with the San Francisco Giants, including in 2001 when he hit 73 homers to set the single-season mark.

"Those two are probably two of the best hitters of all-time," third baseman Alex Bregman said. "So, any time he talks to you about them talking about hitting — you listen."

Baker and Aaron forged a lifelong friendship during their time playing for the Braves. But sometimes Aaron, who was 34 when Baker made his MLB debut at 19 in 1968, would give his much younger teammate a bit of tough love.

"Hank Aaron was getting on Dusty about something, and Dusty kind of chirped back at him, as a young kid, like: ‘Let me do what I want to do,’" Astros outfielder Jake Meyers said. "And Hank was like: ‘No, no, no, no, no — you’re going to do it this way.’ And Dusty really respected that."

While most hitters on the team have gotten an earful about Bonds from Baker, no one hears more stories about the seven-time MVP than slugger Yordan Alvarez.

"He tells me stories almost every day," Alvarez said in Spanish through a translator. "Every time he talks to me or tells me a story, he usually talks about Barry Bonds or compares me with Barry Bonds. He’ll always mention him."

For closer Ryan Pressly, it was impossible to pick just one story Baker has told him that stands out. And he knows there are plenty more tales he’s yet to hear from his manager.

"He’s got so many cool stories about guys he’s played with," Pressly said. "It’s really cool to know that he’s been there, and he’s seen all that stuff. Hopefully, one of these days, I can just sit down with him and have a beer and just talk baseball with him."

Yuli Gurriel has heard plenty of stories from Baker about other players since he took over the team in 2020. But the first baseman was most wowed by one that involved him.

"Dusty told me that he went to Cuba and saw me playing at a Latin American tournament years ago," Gurriel said in Spanish through a translator. "So, I was pretty excited about that."

Baker is known as the ultimate players’ manager and takes a keen interest in everyone on his team. McCullers loves his stories but said the skipper probably wouldn’t be too happy if he shared some of them publicly.

However, the right-hander was quick to recount an unusual gift Baker gave him. The Astros were in San Diego during the pandemic-shortened 2020 season when McCullers arrived at his locker in the visitors’ clubhouse to find something on his chair wrapped in tin foil.

FOX 26's Coco Dominguez checks out the game and what it's all about.

"I slowly open it and there’s like this like big filet of salmon," McCullers said. "And I close it back up. And I’m just like, ‘Who the heck put this in my locker?’"

He soon found out Baker had broken COVID-19 protocols to leave the hotel and pick up the salmon from his favorite fish market because he heard McCullers loved it.

McCullers cracked up as he recalled that story before getting serious about the man these Astros adore.

"He’s just always thinking of others," McCullers said. "And I think that goes along with the storytelling and the way that he just kind of controls that vibe, controls the room. He’s a very thoughtful person."

Star second baseman Jose Altuve is one of many Astros who have said they’d like to win it all this year so Baker can finally add a World Series title as a manager to his already sparkling resume.

Altuve didn’t have a favorite story from Baker but perfectly summed up how he and so many others across the game feel about the man.