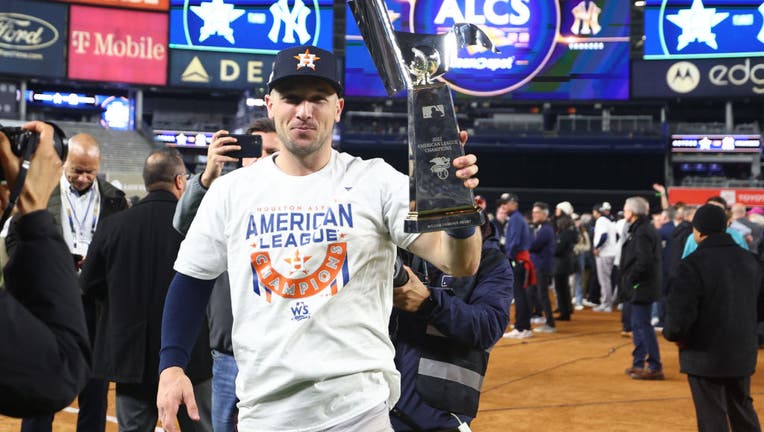 NEW YORK, NEW YORK - OCTOBER 23: Alex Bregman #2 of the Houston Astros celebrates with the American League Championship Series trophy after winning game four against the New York Yankees to advance to the World Series at Yankee Stadium on October 23,

HOUSTON - One young boy's dreams are going to come true, and it's all thanks to Houston Astros player Alex Bregman.

That's a lot of money for a young Astros fan to come up with, but Eli was willing to work for it. He started selling lemonade in his neighborhood to raise money to buy tickets to the game.

Eli is surprised with tickets to the World Series by Alex Bregman, third baseman and shortstop for the Houston Astros after Eli held a lemonade stand to raise money for tickets.

When asked how well his stand went, Eli waved his hand and said "eh, okay", but that didn't stop him from working hard toward his goal.

Alex Bregman, Houston Astros third baseman and shortstop, heard about what Eli was doing and decided to make his dreams a reality with the help of Houston icon Mattress Mack. Bregman's camp surprised Eli at his home with three tickets to the game and the Breggy Bomb mascot.

It was Eli's dream to go to the World Series and he even started selling lemonade to raise money for tickets. Houston Astros Alex Bregman heard the story and surprised the young boy with two tickets to make his dreams come true!

"This is very exciting," said Eli. He was asked if he thought he had a chance of going to the World Series and the boy just shook his head saying, "No, not at all."

Well, his hard work paid off and now Eli can watch the game from Minute Maid Park and even enjoy some lemonade there if he likes.

"I am near tears, over the moon, so excited. The Astros are so special to us and this opportunity is so crazy. My kids get to see it, go to a World Series game, it's beyond," said Eli's mom, Jenni House.

Eli said he is surprised by the ticket from Mattress Mack, Gallery Furniture, and Alex Bregman.

The Astros will play the Philadelphia Phillies in the 2022 World Series and the first pitch for Game 1 of the best-of-seven series will be thrown at 7:03 p.m. This is the Astros 4th appearance in the series in the last 6 seasons but their 5th appearance overall.

Justin Verlander will be the starting pitcher for Game 1 and Aaron Nola will start for the Phillies.