AUSTIN - Texas Governor Greg Abbott announced he is issuing executive orders to reopen businesses in the state and get Texans back to work in stages as a response to COVID-19.

The governor said, "we must be guided by data and doctors." He added that the health and safety of Texans is of the utmost importance.

The death toll in Texas is "far too high" Go. Abbott said, but will not meet the earlier projections. In fact, Texas has the second most recoveries from COVID-19 in the country, the governor said.

Because of these positive-looking numbers, Gov. Abbott is moving forward with developing a plan.

He has developed a Statewide Strike Force which is lead by state leaders including Lt. Gov. Dan Patrick, Attorney General Ken Paxton, and Texas Comptroller Glenn Hegar, to figure out a plan to gradually and safely reopen the state.

The task force will include medical advisors, various industry leaders, and business owners, including Houstonians Mattress Mack, Tilman Fertitta and Dean of the Hobby School and the University of Houston Sen. Kirk Watson.

They will develop medical architecture to enable Texas to gradually and safely begin the work to return to work and other activities.

One of Gov. Abbott's major announcements was that all schools would remain closed until the end of the school year.

Starting Monday, state parks will re-open, but masks and social distancing will be mandatory. Also, current restrictions on elective surgeries will be loosened.

On Friday, April 24, all retail stores can reopen, but only for to-go purchases.

Texas Governor Greg Abbott is expected to discuss his plans to reopen the state.

Gov. Abbott emphasized that the reopening of the economy must occur in stages, so not all businesses will be up and running by May 1.

The Essential Services Order for Texas is set to expire on April 30, but Gov. Abbott says we will have to reevaluate and see if an extension is necessary. 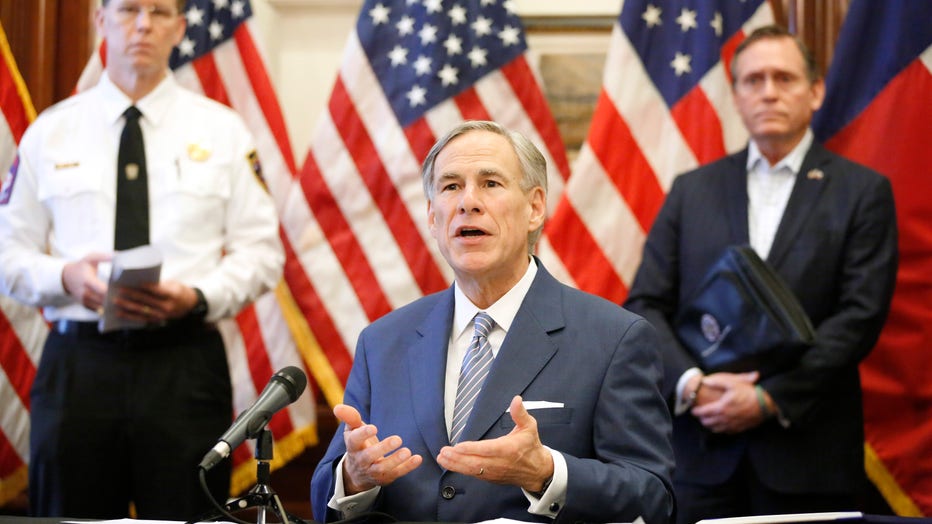 AUSTIN, TX - MARCH 29: Texas Governor Greg Abbott announced the US Army Corps of Engineers and the state are putting up a 250-bed field hospital at the Kay Bailey Hutchison Convention Center in downtown Dallas during a press conference at the Texas S (Photo by Tom Fox-Pool/Getty Images)

On Thursday, President Donald Trump gave governors a road map for recovering from the economic pain of the coronavirus pandemic, laying out “a phased and deliberate approach” to restoring normal activity in places that have strong testing and are seeing a decrease in COVID-19 cases.

The new guidelines are aimed at easing restrictions in areas with low transmission of the coronavirus, while holding the line in harder-hit locations. They make clear that the return to normalcy will be a far longer process than Trump initially envisioned, with federal officials warning that some social distancing measures may need to remain in place through the end of the year to prevent a new outbreak. And they largely reinforce the plans already under development by governors, who have the primary responsibility for public health in their states.

“You’re going to call your own shots,” Trump told the governors, according to an audio recording obtained by The Associated Press. “We’re going to be standing alongside of you.”

Places with declining infections and strong testing would begin a three-phased gradual reopening of businesses and schools — each phase lasting at least 14 days — to ensure that infections don't accelerate again.

In phase one, for instance, the plan recommends strict social distancing for all people in public. Gatherings larger than 10 people are to be avoided and nonessential travel is discouraged.

In phase two, people are encouraged to maximize social distancing where possible and limit gatherings to no more than 50 people unless precautionary measures are taken. Travel could resume.

Phase three envisions a return to normalcy for most Americans, with a focus on identification and isolation of any new infections.

Governor Abbott to update public on Texas' response to COVID-19