Farmington Police Officer Zachary Christensen said he became involved in the Aug. 27 situation at Mesa View Middle School after the sixth grader "assaulted" two school employees. Video of the incident shows the alleged assault involved the student brushing past the school principal as he holds a door shut.

Christensen pulls the girl's backpack off as she questions what he's doing. In the bodycam footage, the officer repeatedly shouts, "You're done" at her, and then says "You're not going to assault the principal" before he's seen pushing the 11-year-old against a wall and demanding she put her hands behind her back. 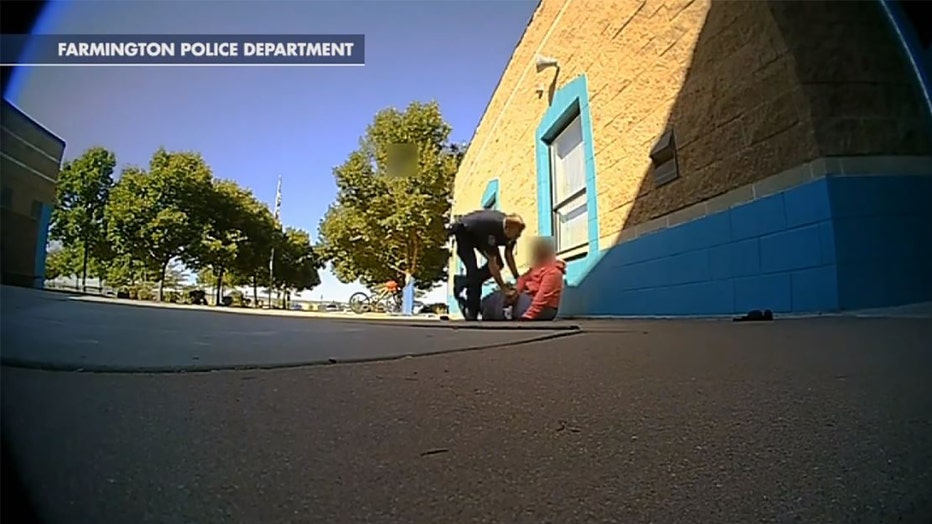 While the officer tries to handcuff her, the girl is heard telling him he's hurting her. Christensen ultimately wrestles the girl to the ground, and she can be heard crying out as he demands she turn over and warns her, "Do not resist."

Someone watching the incident unfold tells the officer to stop and says he's used "excessive force." The child, according to KRQE, suffered a concussion and has arm and shoulder pain due to the incident.

Christensen reportedly said he tried to arrest the girl because that morning, "she went straight to the cafeteria, she took more milks than she was supposed to, she threw a milk on the ground. I mean, they try to say something she just walks off."

In the body camera footage, the girl tells the officer her mom is at the school and she wants to go home, but the officer tells her she's not allowed to leave and is being charged with assault and resisting.

The officer apparently says at one point that school staff members "can’t do anything, they can’t get any interventions in because she won’t listen to anything." He adds that the student has experienced behavior issues at school before.

The child was not arrested and was picked up from school by her mother.

Farmington Police Chief Steven Hebbe on Sunday announced Christensen had resigned on Oct. 1 and said the behavior seen in the video did not comply with department standards and emphasized that "there’s no excuse for the way this girl was treated."

Christensen was placed on administration leave the day after the incident, KOB reported. Hebbe said the officer was up to date on his use-of-force training, but said the department is "trying to figure out where we could have done a better job and what things I need to do as far as training and policies to do a better job in the future."

The case has been referred to the New Mexico State Police for possible criminal charges.