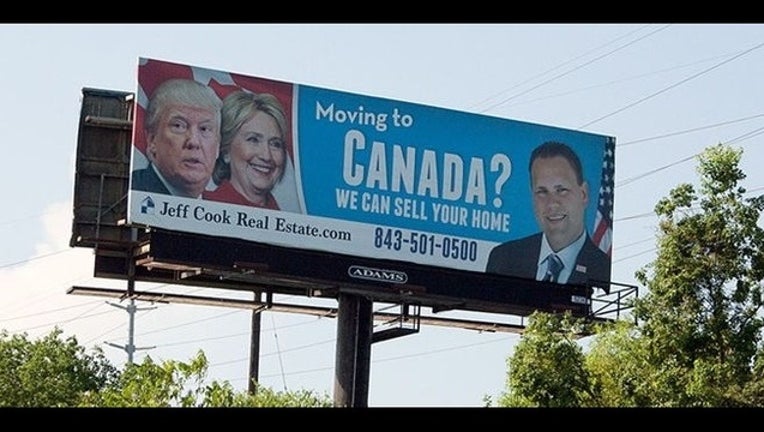 A South Carolina real estate agent is capitalizing on people’s frustrations over the choice of presidential candidates with a unique billboard.

The billboard asks the question: “Moving to Canada?” along with the accompanying phrase, “We can sell your home.”

“We do a lot of billboard’s that are funny, but this is the first time we’ve done something with a political spin,” Cook told FOX 46 Charlotte. “What we wanted to do was create something bipartisan that people could laugh about.”

Cook said there are eight signs in total and they have created a ton of publicity, but that wasn’t the goal. In fact he said his office has received calls from all over including Canada and New Zealand.

While a majority of people are laughing along, others aren’t in on the joke.

“A small percentage of people have called in upset, but overall people seem to be getting a laugh. It’ been amazing.”

The spotlight isn’t hurting business either. Cook said that business has definitely increased, but he wouldn’t attribute it all to the sign.

“It’s not so much people wanting to move to Canada as it is people just wanting to sell or buy a new home.”

One thing is certain, the board has people talking.

A picture of the sign was shared on Jeff Cook Real Estate Facebook page. So far it's been shared more than 9,000 times.