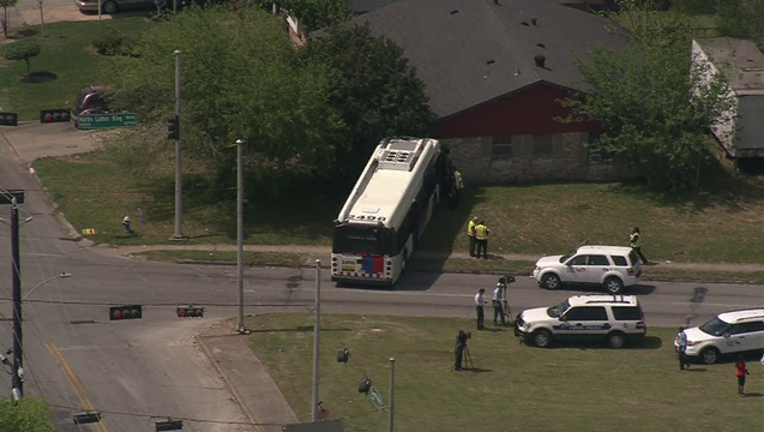 Thankfully, it didn't quite get there, and that makes Barbara Dick about as lucky as you can get.

"I didn't hear a thing I didn't get scared or nothing. When Noah came. And told me what happened I was like 'what!?" she said.

What happened is still not 100% clear.

Just before 1:00 p.m. Wednesday as the bus was heading westbound on South Acres approaching Martin Luther King Blvd. a passenger and the driver got into a fight. It got ugly and odd.

"The suspect had a knife, handed that knife to the bus operator and then pulled out a second knife and commenced to stabbing the operator," said LT. John Wiggins with Metro Police.

The bus veered of the street, cut across the median and stopped just short of the house.

The driver and his attacker tumbled out of the bus.

The driver fell down bleeding from wounds to his neck.

Police caught the attacker a few blocks away. It's not clear if he was wounded too.

What is clear, however, is that had the driver stomped on the gas and not the brake, nothing could've stopped bus 2498 from plowing through the home at 5459 South Acres Drive -- and maybe over Barbara Dick.

Well maybe one thing, she says.

"God. In the name of Jesus, that's who was watching over me."

The driver is expected to survive.