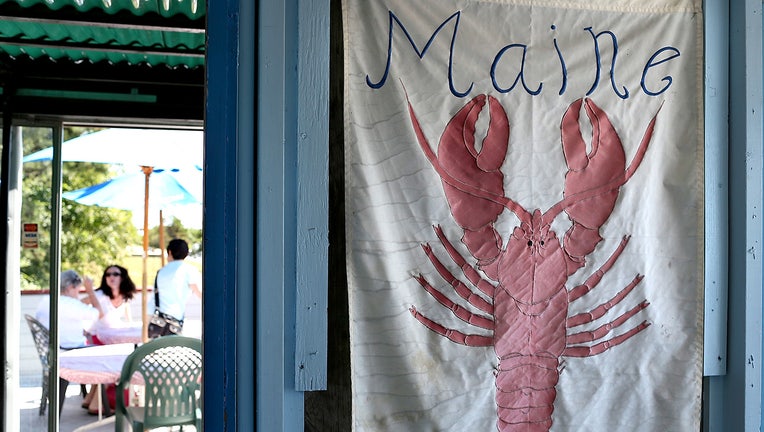 FILE: A lobster banner hangs in the doorway at Benny's Famous Fried Clams on July 21, 2012 in Portland, Maine. (Photo by Justin Sullivan/Getty Images)

AUGUSTA, Maine - Democratic Gov. Janet Mills signed off on a $1.2 billion supplemental budget Wednesday that sends more than half of the money to residents in the form of $850 relief checks.

Backed by dozens of lawmakers and cabinet members, the governor signed the bill into law in the State House Hall of Flags.

"What this budget shows once again — through hard work and good faith negotiation — Democrats, Republicans and independents can come together to do what is right for Maine people. And that we can do so without rancor or bitter partisanship that has sometimes divided Augusta in the past," she told the assembly.

The swift action means the checks will be mailed to more than 850,000 Mainers as early as June.

Lawmakers overwhelmingly approved the budget proposal in a show of bipartisanship.

Mills proposed returning much of the money to Mainers, taking a suggestion from Republicans as a historic surplus ballooned thanks to federal spending and rosier-than-expected revenue forecasts. It was originally touted as pandemic relief, but is now called inflationary relief.

In addition to direct payments, which accounted for $729 million of total spending, the budget included $60 million to address contamination from so-called forever chemicals including PFAS.

It also includes $20 million to fund two years of free community college for eligible graduating high school students between 2020 and 2023.

Other provisions include a $3 million legal fund to help the lobster industry battle the federal government over rules aimed at protecting endangered North Atlantic Right Whales. Absent from the budget was additional funding to address legal services for the poor.

As for those $850 payments, most of the state’s residents qualify.