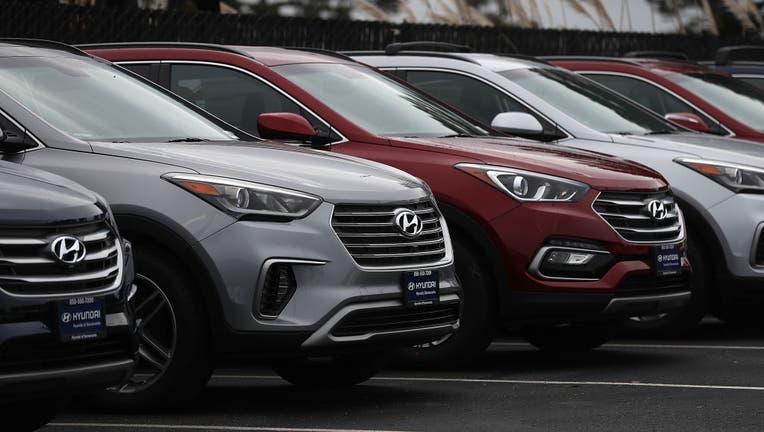 COLMA, CA - APRIL 07: Brand new Hyundai Santa Fe SUVs are displayed at a Hyundai dealership on April 7, 2017 in Colma, California. South Korean automakers Kia and Hyundai announced that they are recalling 1.4 million cars and SUVs in the U.S., Canada

HOUSTON - Kia is recalling nearly 295,000 vehicles in the U.S. because the engines can stall or catch fire.

The recall comes just a week after Kia and affiliated Korean automaker Hyundai were fined by the U.S. government for allegedly delaying recalls.

Kia says in documents posted Saturday by the U.S. government that no manufacturing defect has been found, but it’s recalling the vehicles to mitigate any risk of fire.

The recall comes after the National Highway Traffic Safety Administration began investigating Kia and Hyundai engine fires in 2019. The agency opened the probe after the nonprofit Center for Auto Safety filed a petition seeking the investigation. When the inquiry began, the agency said it had owner complaints of more than 3,100 fires, 103 injuries and one death.

Kia will notify owners starting Jan. 27. Dealers will inspect the engines for fuel or oil leaks and replace them if necessary. The company also is developing a knock sensor software update.

FOR THE LATEST UPDATES DOWNLOAD THE FOX 26 NEWS APP

Last week, the NHTSA announced that Kia and Hyundai must pay $137 million in fines and for safety improvements because they moved too slowly to recall more than 1 million vehicles with engines that can fail. The fines resolve a three-year government probe into the companies’ behavior involving recalls of multiple models dating to the 2011 model year.

Kia must pay $27 million and invest $16 million on safety performance measures. Another $27 million payment will be deferred as long as Kia meets safety conditions, the NHTSA said.

Kia denied the U.S. allegations but said it wanted to avoid a protracted legal fight.

Engine failure and fire problems with Hyundais and Kias have plagued the companies for more than five years.