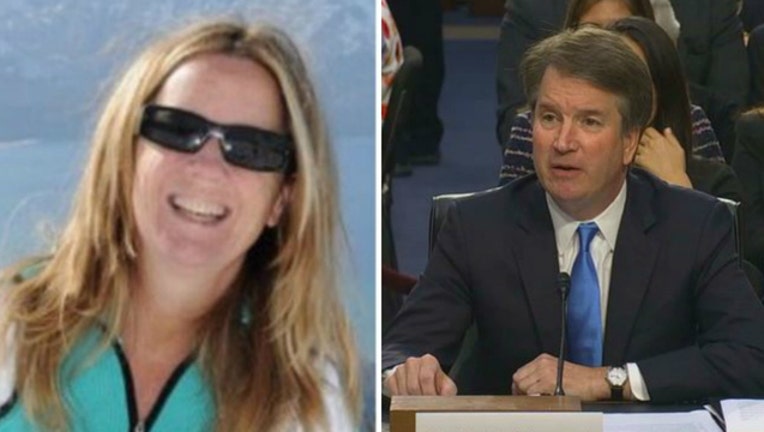 Ford committed to an "open" hearing after negotiators convened a call on Sunday, her attorneys said in a statement. A spokesman for the committee's chairman, Sen. Chuck Grassley, R-Iowa, confirmed the meeting would be set at 10 a.m. Thursday.

"We've made important progress," said Ford's attorneys Debra S. Katz, Lisa J. Banks, and Michael R. Bromwich. "Dr. Ford believes it is important for senators to hear directly from her about the sexual assault committed against her. She has agreed to move forward."

Terms of their appearances are still being negotiated, but several details have been resolved.

Ford agreed that she will testify after Kavanaugh, rather than going first, as she had preferred, according to a source familiar with the talks, but was unauthorized to discuss the talks publicly and was granted anonymity.

But who will be asking the questions remains unresolved, the lawyers said.

Republicans have been trying to hire an outside female counsel who could take over the questioning. The 11 senators on the GOP side of the dais are all men, which could send an unwanted message on live television against the backdrop of the #MeToo era so close to the midterm election. They could also use staff attorneys to the Republican majority on the committee.

"We were told no decision has been made on this important issue, even though various senators have been dismissive of her account and should have to shoulder their responsibility to ask her questions," the attorneys said.

The attorneys said they did not know when they would have answers to the unresolved issues.

A final accord could bring to a close days of brinkmanship that have roiled Washington ahead of midterm elections and threatened to jeopardize Kavanaugh's confirmation to the court, even as some Republicans say the additional hearings may do little to change their support for him.

Earlier Sunday, Sen. Lindsey Graham, a Republican on the Senate Judiciary Committee, said lawyers for Ford are contesting two GOP conditions of the proposed 10 a.m. Thursday hearing - that Ford and Kavanaugh will be the only witnesses and that an independent counsel will ask the questions.

"If they continue to contest those two things, there won't be a hearing," Graham said. "We're not going to let her determine how many people we call" and on outside counsel. "I hope she comes."

Graham, speaking on "Fox News Sunday," promised a fair hearing in which both Ford and Kavanaugh "will be challenged" but said "unless there's something more" to back up her accusation, then he's "not going to ruin Judge Kavanaugh's life over this."

"I want to listen to her, but I'm being honest with you and everybody else. ...What am I supposed to do? Go ahead and ruin this guy's life based on an accusation?" Graham asked, explaining his dilemma over an allegation of a 1980s incident that is past the statute of limitations for criminal charges. "But she should come forward. She should have her say."

One issue that appears to have been resolved is the committee's refusal to subpoena Mark Judge, the other person Ford alleges was in the room when the assault occurred when they were high school age.

Lawyers for Ford and bipartisan representatives of the committee came to a tentative agreement for a Thursday hearing after a short but productive phone call late Saturday, said a person briefed on the matter, who was not authorized to speak publicly and requested anonymity.

But unresolved is who would question the 51-year-old California college professor and other potential witnesses. Ford wants an appearance by Mark Judge, a Kavanaugh friend who Ford asserts was in the room when the incident occurred. Meanwhile, the committee's 11 Republicans - all men - have been seeking an outside female attorney to interrogate Ford, mindful of the election-season impression that could be left by men trying to pick apart a woman's assertion of a sexual attack.

Sen. Dick Durbin, a Democrat on the committee, said Sunday he believed Ford's requests have been "reasonable" and that she deserves a fair hearing to determine whether her allegations are "serious" enough to vote down Kavanaugh's Supreme Court nomination.

He acknowledged that lawmakers will "probably not" be able to know the truth of Ford's decades-old accusation that Kavanaugh assaulted her at a house party when they were teenagers. But Durbin left little doubt that that Democrats will go after Kavanaugh's drinking history to help shed light on the matter. Ford has alleged Kavanaugh was "stumbling drunk" when it happened.

"There have been a lot of things said about the alcohol that was consumed by the judge as well as by others in his school. That has to be part of any relevant questioning," he said.

Durbin told ABC's "This Week" that some Republicans "reached out to Democratic senators and assured them that they are looking to this as kind of a determination as to how their final vote" on Kavanaugh is cast.

Tensions have been running on overdrive since Ford went public last week with her allegation that Kavanaugh assaulted her when they in high school. Kavanaugh, an appellate court judge, denied the allegation and said he wanted to testify as soon as possible to clear his name.

The White House is approaching Ford's potential testimony with trepidation, nervous that an emotional performance might not just damage Kavanaugh's chances but could further energize female voters to turn out against Republicans in November against the backdrop of the #MeToo movement.

Moreover, the West Wing aides who had urged Trump to remain muted in his response to the accusations worried about how the president might react to an hourslong, televised hearing. In tweet Friday, Trump broke his silence to cast doubt on Ford's story in ways Republicans had been carefully trying to avoid.

Trump mused to confidants that the "fake" attacks against his nominee were meant to undermine his presidency, according to a White House official and a Republican close to the White House. Both spoke on condition of anonymity because they were not authorized to discuss private conversations.