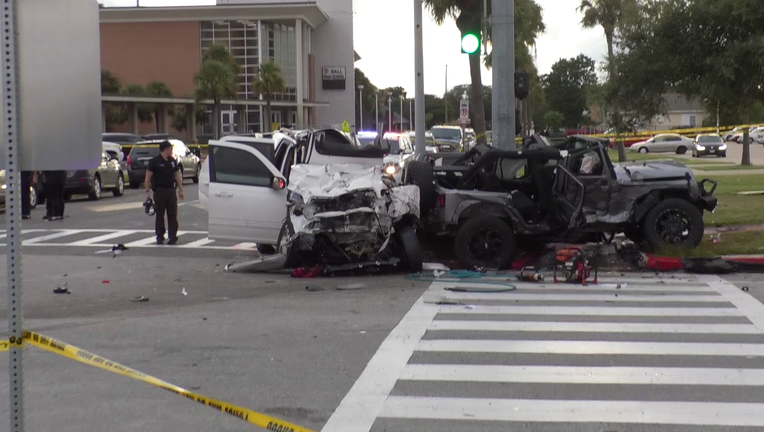 Photo from the scene of the crash in Galveston on Friday evening.

GALVESTON, Texas - A teenager has died following a two-vehicle crash in Galveston Friday evening and a suspected drunk driver has been arrested.

According to officials, the crash occurred at the intersection of 41st Street and Avenue O around 6 p.m.

RELATED: Galveston police to crack down on drunk driving in new campaign after 5 die in August crashes

When officials arrived on the scene, officials began life-saving efforts for multiple passengers of both vehicles. Witnesses said a white Toyota SUV was traveling at a high rate of speed westbound on Avenue O and struck a Jeep that was traveling northbound on 41st Street.

One passenger, whom authorities later identified as Mason Nelson, 14, was pronounced dead at the scene.

All others involved in the crash were taken to the University of Texas Medical Branch in Galveston. Several victims were said to be in critical condition and others were stable. We're told a total of 5 people were in a jeep and as of Saturday, two remain in serious condition at the hospital.

The SUV driver was identified by officers as Keith Brazer, 28, of Galveston. He was arrested and charged with Felony murder on a $500,000 bond. Investigators believe alcohol is a contributing factor in the crash, but no additional information was shared, as of this writing.