Fans wrapped around the restaurant waiting for hours to meet Astros star Jeremy Peña, who worked the drive-thru window at Raising Cane's in southeast Houston.

HOUSTON - Fans had already been waiting for hours to meet Houston Astros star Jeremy Peña, who was working the drive-thru window at Raising Cane's on Monday.

Peña was at the restaurant located at 7009 Gulf Freeway starting at noon, just in time for lunch. He became the first rookie position player to win a World Series MVP award. Peña also won a Gold Glove and was the AL Championship Series MVP.

FOX 26's Damali Keith caught up with customers at the Raising Cane's on Gulf Freeway, who were thrilled to see Astros' MVP Jeremy Peña working the drive-thru at the restaurant.

The 25-year-old shortstop became the first hitter to win those three prizes in a career, according to OptaSTATS — and he did it all in his rookie season.

Long before Astros Shortstop arrived to an enormous, excited crowd at Raising Cane's, fans actually began flocking to the chicken finger fast food shop hours before, some as early as noon the previous day. 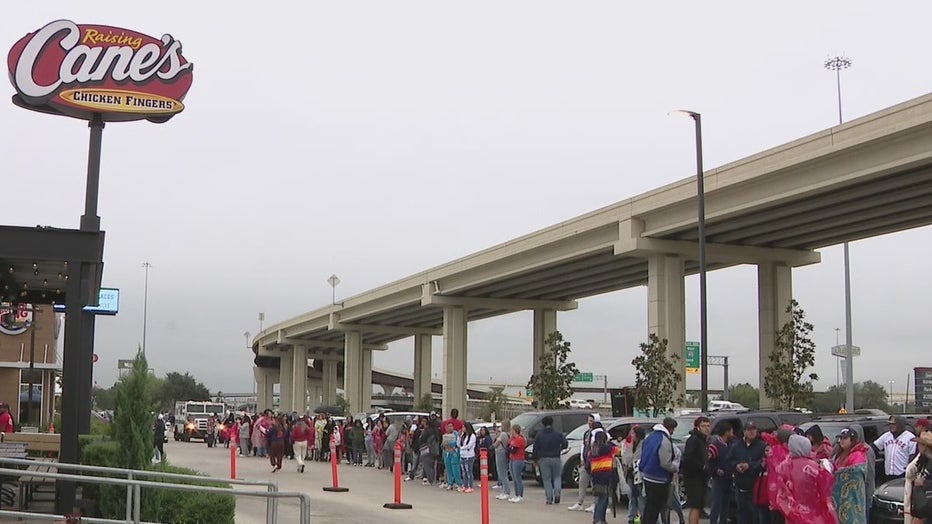 "It’s not every day where you’re five feet away from an ALCS World Series MVP. So, to be this close to a guy of this caliber it’s pretty awesome," said Adrian Verde.

"I asked him (Pena) for a handshake, and he said yes," said mega fan Daniela Gulmar.

Some asked for other things like "Will you go to prom with me" read one girl's sign and another lady held a giant heart with the words "Por tu, me divorcio". Translations? "For you, I’ll get a divorce" and everyone wanted to see the superstar's signature hand-heart gesture.

And of course, Peña could not be happier seeing his fans.

"I mean it’s awesome," he said smiling. "We love doing things like this where we can connect with the fans."

The Astros shortstop went to none other than Houston Jeweler Johnny Dang for the new bling. All of this is coming off what he calls a special 72 hours since winning the World Series.

As for his first and last day on the job at Cane’s?