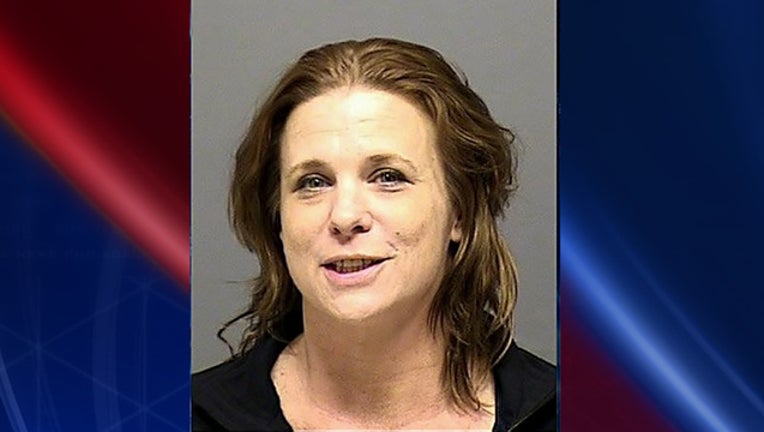 PORTLAND, Ore. (AP) - An Oregon woman whose inmate boyfriend died from a meth-laden kiss after a prison visit was sentenced to two years behind bars Tuesday on a drug conspiracy charge.

Melissa Ann Blair and Anthony Powell shared a long kiss at the end of a visit last year at the Oregon State Penitentiary and she passed seven tiny balloons filled with methamphetamine into his mouth. Two of the balloons ruptured in Powell's stomach a short time later and he died of methamphetamine toxicity, prosecutors have said.

U.S. District Judge Marco Hernandez said Blair's actions were part of a scheme devised by Powell and others to get drugs inside the prison. There was a dispute as to whether Blair participated of her own free will, but Powell shared responsibility for his own death, Hernandez said.

"It was tragic and sad but he shares responsibility for what happened," the judge said.

The 41-year-old was serving a life sentence for aggravated murder in the stabbing death of his mother-in-law, according to court records.

She did not make a statement in court. Her sister, who attended the hearing, declined to comment.

Blair felt coerced by Powell even though he was behind bars, her attorney, John Ransom, said outside court. She used methamphetamine but was not addicted, he said.

"It was a very Svengali-type situation where he had total control over her life," Ransom said. "She had to do whatever he said."

Powell's close friend, Brandy Pokovich, attended the hearing and said she became pen pals with him after he wrote to her husband - a former inmate - and she replied to him instead. Over a dozen years, Pokovich said, they formed a deep bond through letters, phone calls and visits.

She called herself Powell's "sister by choice" and believed he felt remorse for his crime, she told the judge.

"Now, because of the choices that were made, I no longer can pick up the phone and hear his voice, I can't go on a visit and see his big cheesy smile and get the best hug in the world," she said in a victim impact statement.

"He was not just an inmate. He was a very loved and cared-for person who had a family that would always be there no matter what," she said.

Outside court, Pokovich said she helped Powell find girlfriends by using her social media accounts and introduced him to Blair.

Four other defendants in the case, like Blair, have pleaded guilty to a drug conspiracy charge and will be sentenced in the coming weeks.