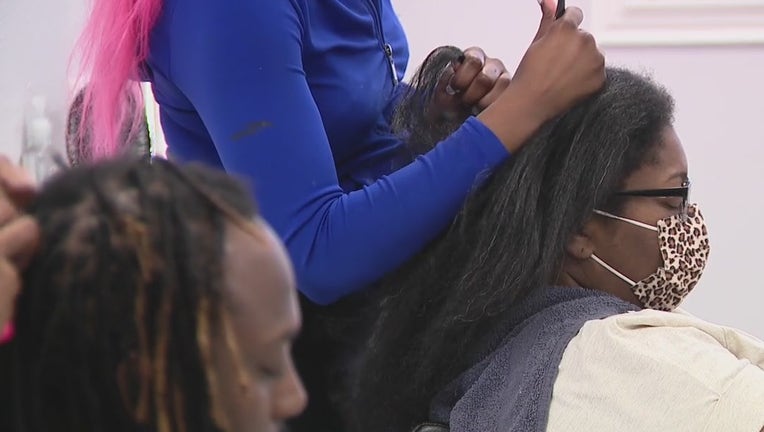 HOUSTON - A bill that aims to ban race-based hair discrimination at work and school in the U.S. is one step closer to becoming federal law.

Houstonians say they're elated to see this bill passed not just on a state, but a federal level. They say Black people in this country should be allowed to express their culture freely at school and in the workplace.

"No student, no person, no individual should have to stop identifying as themselves to be accepted," said Houston entrepreneur Gary Lee.

On Friday, the U.S. House passed the CROWN act. CROWN stands for creating a respectful and open world for natural hair. Styles like braids, cornrows, Locs, and Afros, which have been deemed unprofessional in many spaces would be protected under this law.

"It's our crown, it’s a statement, it’s our personalities, it’s who we are, it’s the hair that grows out of our scalp," said Autumn Ayri, owner of Lady Ayri Natural Hair Spa.

She says she’s seen far too many clients afraid to wear their natural hair at work or for job interviews.

"Ladies want to wear their hair a certain way, but they can’t or they’re afraid too, and they only wear their personality hair when it’s time for vacations," Ayri said.

Several states have already signed the CROWN Act into law. A push to pass it here in Texas started back in January 2020 after Barbers Hill High School suspended De'Andre Arnold because of the length of his locs; he was told if he didn’t cut them, then he wouldn’t be able to walk at graduation or attend his prom.

"It isn’t nice, it isn’t clean, it isn’t professional, Black people have been told that for too long," said Arnold.

Arnold ended up switching schools as a result, the CROWN Act never came to pass in Texas, but after a 235 to 189 vote in the U.S. House, it’s one step closer to becoming a national law.

"We deserve to be able to be ourselves in the workplace,," Arnold said.

If the CROWN Act does become law, natural hair discrimination in schools or workplaces would be treated just as if it were race discrimination under federal civil rights law.

"We're a land of immigrants, literally everyone here from Europe to Africa; so on and so on, so now you can be who you are without having to fit a European standard and I think that’s the most important piece to this," Lee said.

The bill now heads to the U.S. Senate for a vote, which could be an uphill battle. The Biden administration has expressed their support for the bill. The President said no one should be denied a job or education because of their hair texture or hairstyle.