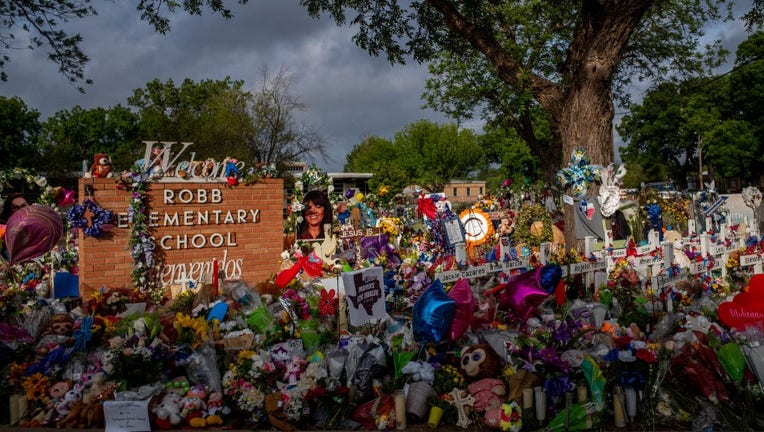 A memorial dedicated to the 19 children and two adults killed on May 24th during the mass shooting at Robb Elementary School is seen on June 01, 2022 in Uvalde, Texas. (Photo by Brandon Bell/Getty Images)

HOUSTON - The Houston Texans are donating $400,000 to the Robb School Memorial Fund to help those impacted by the shooting at the Uvalde elementary school last week, the team announced Wednesday.

Nineteen students and two teachers were killed when a gunman entered the school on May 24.

The team says the players led the donation effort, coming together to give $200,000 to the fund. The Texans organization is matching the donation.

"Texans care about Texans, especially in times of triumph and tragedy," Houston Texans Chair and CEO Cal McNair said. "I’m so proud of our players for championing this effort and was inspired to support our neighbors in Uvalde alongside them. I also know we have a great responsibility to lend our voices to important and meaningful conversations that bring awareness to senseless gun violence."

The Texans say players and staff will also wear orange on Friday, June 3, in support of the Uvalde community and to take part in National Gun Violence Awareness Day.

The team encourages Houstonians to join them in wearing orange on Friday.

The NFL Foundation and the Dallas Cowboys also announced a combined $400,000 donation, with $200,000 going to the Robb School Memorial Fund and the other $200,000 to the Uvalde Strong Fund.

An account has been opened at First State Bank of Uvalde for the families of Robb Elementary.

If you would like to donate, Uvalde CISD said you can at any First State Bank branch. Please make all checks payable to "Robb School Memorial Fund."

You can also Zelle donations to robbschoolmemorialfund@gmail.com