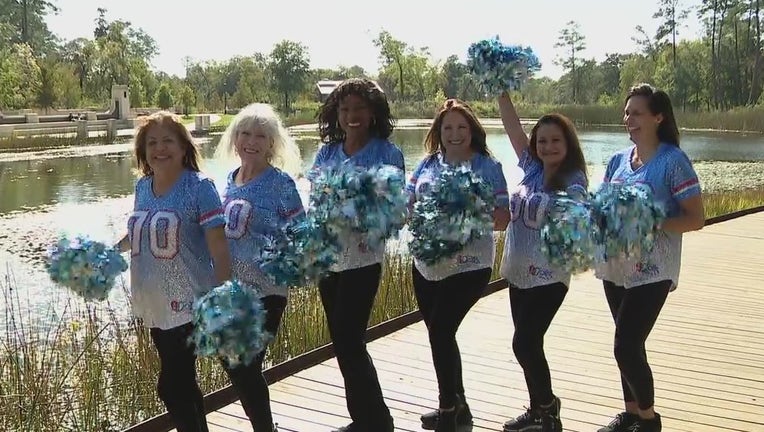 HOUSTON - A group of NFL cheerleaders is thankful they've found each other again! Some of them cheered more than 40  years ago together, back in the Houston Oilers "Luv Ya Blue" days. Their dancing crew was known as the Derrick Dolls during the 1970s, 80s and 90s.

We took a trip down memory lane with them at Memorial Park's lovely Clay Family Eastern Glades. Their time on the football field in the Astrodome, cheering on the Houston Oilers, still dances in their minds, as some of their fondest memories.

"It was a lot of fun, that's something that you can't ever take away from us. I was one of the originals in 78, 79, and 80. Just out there on that field, it was something else," says Vivian Cisneros.

They wear the decade of when they danced on their jerseys! Social media helped bring them back together about ten years ago.

"We kind of lost touch with each other for many years, but because when we got back together, it was like it was just yesterday," says Sylvia Bonham-Smith.

They cheered and danced during the days of many football greats, who are still household names like the Tyler Rose and Dr. Doom.

"I was there in 1979 and 80, back in the day with the legendary Earl Campbell, Robert Brazile, Dan Pastorini. It was just a glorious time cheering for all those legendary football players," says Joyce Mikle.

Sonya Brazeal tried out for the Derrick Dolls when she was a senior in high school!

"Myself and the drill team director went out for the first round in 1985, so you have the student and the teacher trying out together. We made it in February of that year, and then I graduated in May and had to wait until my 18th birthday to sign my contract, so we danced for a year and left when the team disbanded. Then, when I heard it was making a comeback in 1993, I tried out again and made the team. So, I went from being the youngest to now one of the oldest at 26, if you can believe it, so you have 1,000 ladies going for 36 active spots," explains Sonya.

They had some big moments through the decades and even got to travel overseas as NFL cheerleaders and dancers.

"The highlights were going to the American Bowl the first year which was 92 to 93. We did the American Bowl in Tokyo and it was great - and it was so much fun to dance with the Dallas Cowboy Cheerleaders and cheering for our football team, our quarterback was Warren Moon," says Maria Regner.

They also got to travel to Mexico for the American Bowl to play the Dallas Cowboys. Sonya says the Dallas cheerleaders actually went inside during a storm to clean mud off their uniforms and that helped send the Derrick Dolls into more fame.

"Getting to do this at the next level was really exciting for me as a dancer," says Jennifer Smith.