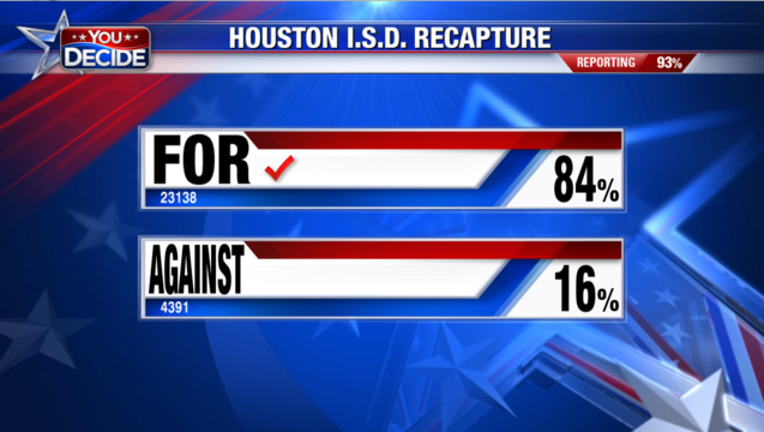 HOUSTON – Today, Houston voters authorized the HISD board to purchase $77.5 million in attendance credits to fulfill the district’s financial obligation under the state’s Robin Hood school finance law rather than see the district’s most valuable commercial property permanently removed from HISD’s tax rolls. With an overwhelming margin of 85%-15% in early voting, the campaign to support passage of HISD Prop. 1 appears headed for success.

“We are pleased that voters made the smart choice for all of our community,” said Bob Harvey, President and CEO of the Greater Houston Partnership. “Keeping HISD’s tax base intact ensures that Houston businesses can continue to help fund Houston’s public schools and its future leaders,” said Harvey. “Now we turn our attention to advocating for wholesale changes to our state’s outdated school finance system.”

“The strong majority shows overwhelming support of the continued fiscal stability of HISD while meeting its obligations under the Texas Education Code. Although we won this fight and avoided an unprecedented and permanent detachment of commercial property value, we firmly believe that the Texas school finance equalization laws must be updated for the health and wellness of our education system,” said Bob Eury, President of Central Houston.

“The passage of Proposition 1 is a victory for HISD students, their teachers and parents, commercial property owners, retail businesses and residents,” added Eury.

“This vote averts the chaos that detachment would have unleashed on the local real estate market,” said Alan Hassenflu, Chairman of the Houston Realty Business Coalition.

“Keeping the buildings that are within HISD’s geographic boundaries on one tax roll will help foster continued economic development in our community,” added Mano DeAyala, President of the “C” Club.

Under Texas’ current school finance system, HISD is classified as a property-wealthy district even though more than 75 percent of its students come from low-income households. “For the sake of Texas’ future workforce, the state legislature must reform the school finance structure,” Harvey added. “We stand ready to build upon this campaign to construct a community-wide effort and lend our support to the legislature to build a school finance model that works for all of Texas,” Harvey concluded.