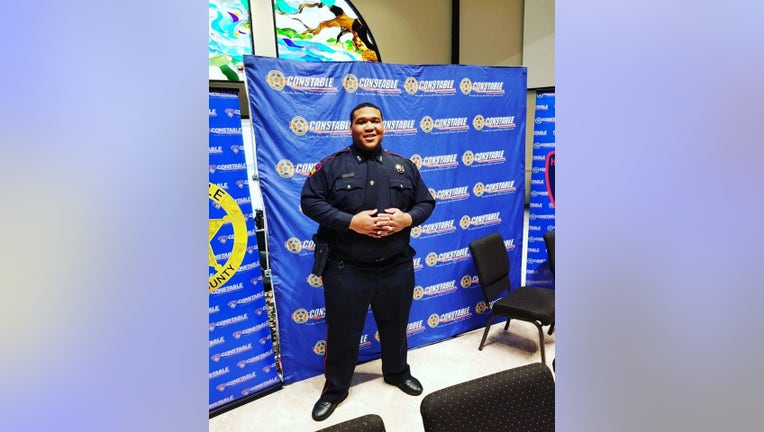 HOUSTON - It's been six months since three deputies with the Harris County Pct. 4 Constables' Office were shot in an ambush that claimed one officer's life and seriously injured two others, one of them is expected to return to duty.

Deputy Jaquim Barthen, 26, was one of three officers who was attacked during an apparent robbery that turned into an ambush in October 2021. The three constable deputies were working extra jobs at 45 Norte Bar and Lounge on the North Freeway when a witness told them of a possible robbery.

All three officers then tried to intervene in the alleged robbery when they were ambushed and shot from behind by a suspect armed with an AR-15 rifle.

Deputy Barthen, a 2-year veteran with Pct. 4, was shot in the foot and suffered non-life-threatening injuries.

MORE: Deputy shot in ambush speaks exclusively to FOX 26 after he and 2 other officers, were shot and 1 killed

According to Constable Mark Herman, Deputy Barthen is expected to return to full duty on Monday, April 11th.

"It takes a strong, selfless man to return to a work after the horrific ambush him and his brothers in blue endured the night of October 16, 2021," officials said in a press release. "Join us in prayer for Deputy Darryl Garrett who remains in the hospital, and please remain to keep Fallen Deputy Kareem Atkins' family and loved ones in your hearts and prayers," Harris Co. Pct. 4 Constables added.

Nadia Atkins, the widow of Harris County Pct. 4 Deputy Kareem Atkins, shared her thoughts on the arrest of the suspect in the deadly ambush that took her husband's life. She also shared how she wanted Dep. Atkins to be remembered. "I want to keep him alive for the sake of my kids."

"You kill one of our officers, we will arrest you," Chief Finner said pointing at the photos of Miller. One of the images shows the suspect's hands cuffed behind his back. "That's Deputy Atkins' handcuffs, and I want people to know that."

Miller's next court appearance is scheduled to take place in July.