HOUSTON - Texas Governor Greg Abbott was in Houston on Tuesday to hold a roundtable discussion with healthcare professionals and provide an update on the state’s COVID-19 vaccination efforts.

"We did have a very productive conversation about things like the COVID response and about things like the way the vaccination program is working," Gov. Abbott said. "We also discussed some lessons learned from COVID to build a healthier Texas as we move forward through the course of this pandemic and importantly after the pandemic."

The governor says those conversations included issues such as insuring the capability to maintain the ongoing supply chain availability of PPE in the future, the value of telehealth and the mental health needs of Texans.

Gov. Abbott says Houston Methodist, which has been serving as one of Texas’ mass vaccination hubs, has helped Texas become a national model for the vaccination program.

"Their exceptional work has led to the ability to be able to administer more than 4,000 vaccines in a single day in a single location," Gov. Abbott said. 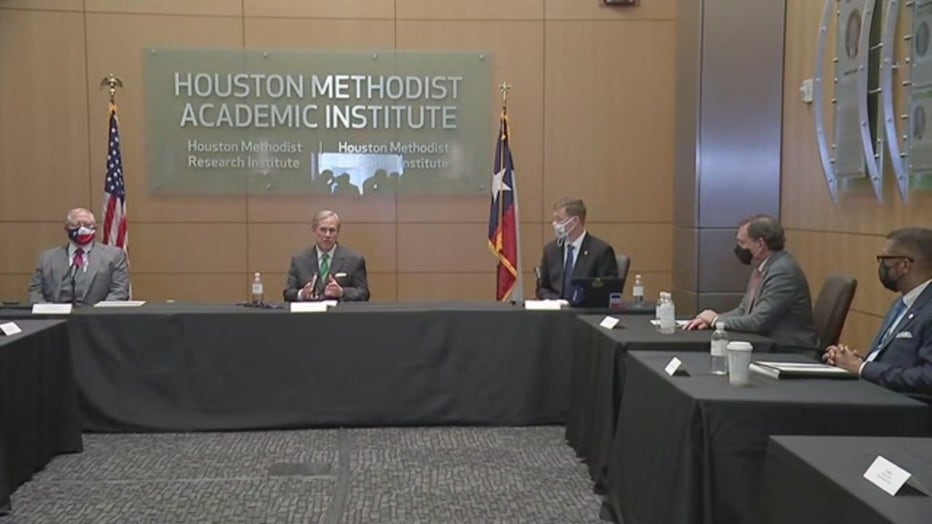 The governor said, as of Tuesday, the state had distributed 1,725,575 doses that were shipped to providers, and 1,358,678 of those doses had been administered to Texans.

In January, Texas established large vaccination sites or hubs around the state with the goal of providing more people the vaccine and a simpler way to sign up for an appointment. A list of hub providers can be found on the DSHS website.

Gov. Abbott said 28 hubs were open in Texas last week, and that number has increased to 78 this week.

"One way that Texas has been able to tremendously accelerate vaccinations is by opening up these large scale hub vaccine centers like what Houston Methodist has been able to accomplish," Gov. Abbott said. "What this does is it allows the community to have several locations capable of vaccinating thousands of people at each of those locations."

Texas health providers getting doses of the COVID-19 vaccine this week will include 28 providers that will focus on large community vaccination efforts, state health officials said.

Altogether this week, the governor says there will be 260 providers in 122 counties getting allocations, in addition to providers in other counties still administering vaccines from shipments they already received.

Harris County has administered far more vaccines than any other county in Texas, according to Gov. Abbott. As of Monday, the governor says the county had administered 259,848 vaccines, almost double the amount by the second closest county.

"We welcome Governor Abbott to Houston today. Houston is the largest city in Texas and America without Medicaid Expansion, meaning that the public health infrastructure will face extremely difficult challenges in assisting vulnerable communities when it comes to vaccinations. With so many families without primary healthcare coverage, all levels of government must work together to serve our shared constituents. The Houston Health Department has been working tirelessly to vaccinate Houstonians. Both Houston Health and Harris County Public Health have the experience and a lot of insight to offer regarding vaccine distribution. We must work as a team and seek to be as inclusive as possible to get the job done."