Hurricane Laura pounded Louisiana near the Texas border early Aug. 27 with heavy wind and torrential rain, unleashing a wall of seawater on cities in its path.

Laura pounded the Gulf Coast with heavy wind and torrential rain, unleashing a wall of seawater on cities in its path. Photos showed extensive damage to the city of Lake Charles, Louisiana, including shattered windows throughout the floors of a high-rise building. 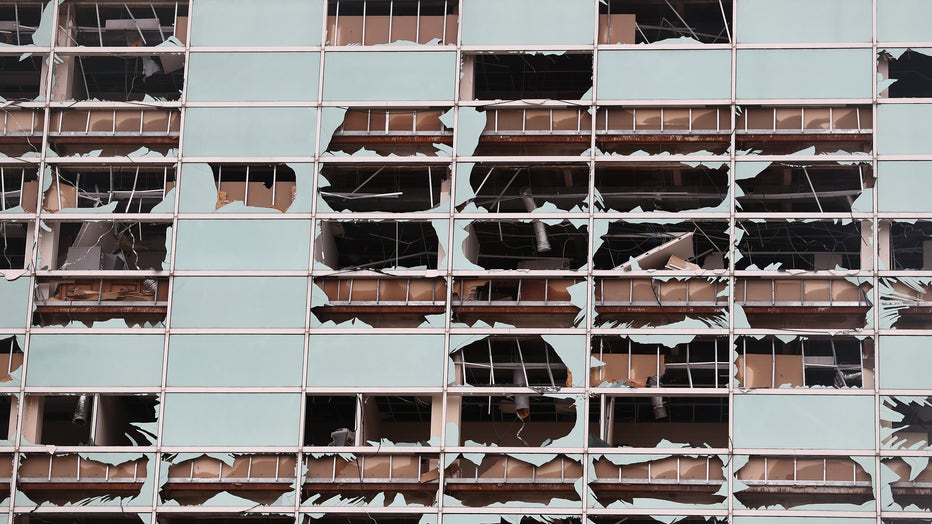 Capitol One Bank Tower is seen with its windows blown out in the downtown area after Hurricane Laura passed through on Aug. 27, 2020 in Lake Charles, Louisiana. (Photo by Joe Raedle/Getty Images) 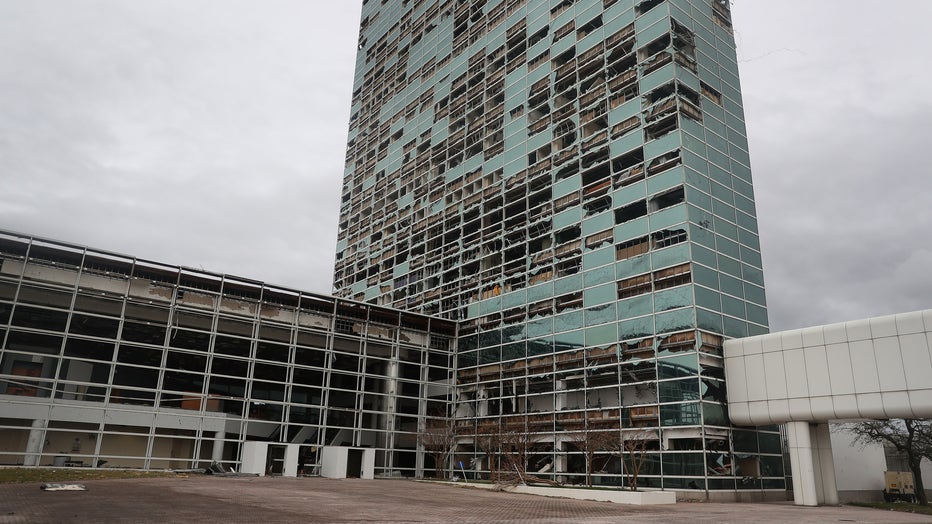 Capitol One Bank Tower is seen with its windows blown out in the downtown area after Hurricane Laura passed through on Aug. 27, 2020 in Lake Charles, Louisiana. (Photo by Joe Raedle/Getty Images)

A video taken by a storm chaser, which appeared to show the same high-rise building, was posted on Twitter as Laura battered the area. The caption read in part, “buildings completely gutted, glass falling everywhere in downtown Lake Charles, LA in the eye of Hurricane Laura.”

Debris filled the streets of the Lake Charles, a city of 80,000 people on Lake Calcasieu. Drone footage showed the roof of buildings blown off, flooded streets and even a radio tower completely toppled. 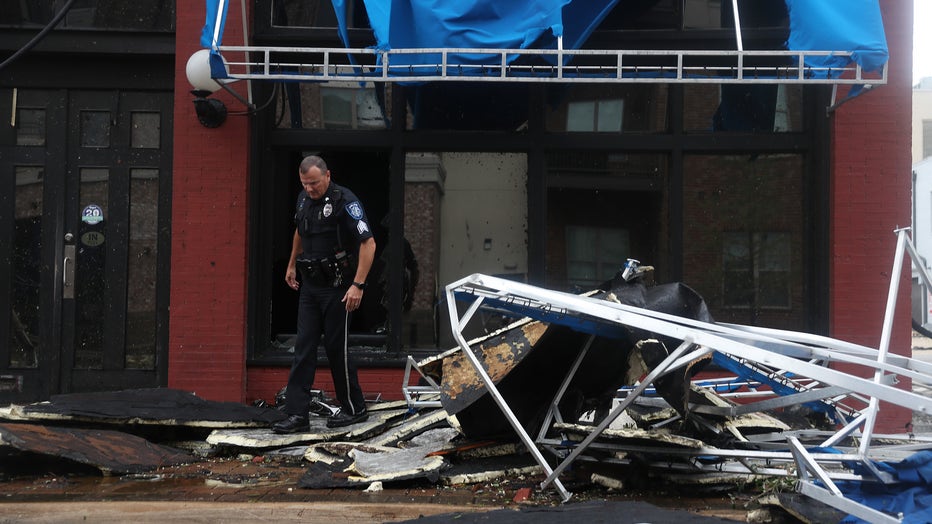 A Lake Charles police officer helps clear the streets in the downtown area after Hurricane Laura passed through on August 27, 2020 in Lake Charles, Louisiana. (Photo by Joe Raedle/Getty Images) 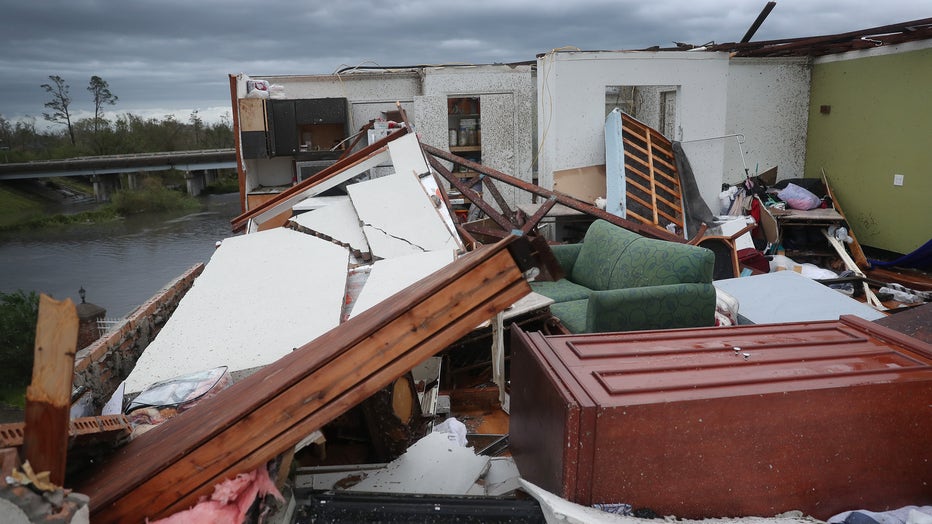 A room that had its roof blown off is seen in a hotel after Hurricane Laura passed through the area on Aug. 27, 2020 in Lake Charles, Louisiana. (Photo by Joe Raedle/Getty Images) 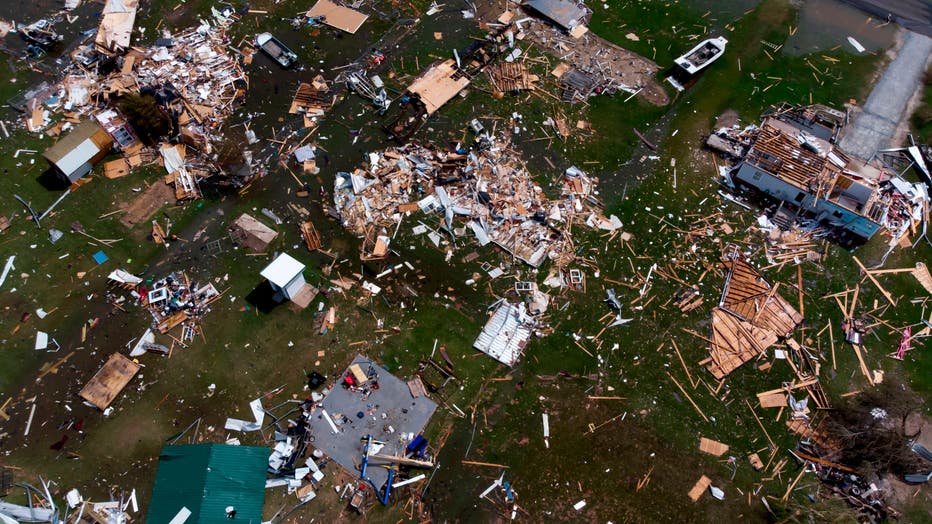 This aerial view shows damage to a neighborhood by Hurricane Laura outside of Lake Charles, Louisiana, on Aug. 27. (Photo by STRINGER/AFP via Getty Images)

Images taken from Golden Nugget Lake Charles Hotel and Casino showed a building completely flattened by the powerful winds as Laura moved through the state.

The National Hurricane Center said Laura slammed the coast with winds of 150 mph at 1 a.m. CDT near Cameron, a 400-person community about 30 miles east of the Texas border. Forecasters had warned that the storm surge would be “unsurvivable” and the damage “catastrophic.”

They predicted a storm surge of 15 to 20 feet in Port Arthur, Texas, and a stretch of Louisiana including Lake Charles.

In this video, sheets of rain can be seen being blown across the streets in Lake Charles, north of Cameron, during the storm.

"This surge could penetrate up to 40 miles inland from the immediate coastline, and floodwaters will not fully recede for several days," the hurricane center said.

Hundreds of thousands of people were ordered to evacuate ahead of the hurricane, but not everyone fled from the area, which was devastated by Hurricane Rita in 2005.

RELATED: Louisiana sheriff to residents: ‘Write your name... and next of kin and put it in a ziploc bag in your pocket’

Hours after the hurricane made landfall, the wind and rain were still blowing too hard for authorities to check for survivors.

Rescue crews descend on Louisiana in aftermath of Hurricane Laura

Crews from several states were dispatched to assist in the aftermath of Hurricane Laura along the Louisiana coastline, which battered buildings, flooded streets and left thousands without power.

“There are some people still in town, and people are calling ... but there ain’t no way to get to them,” Tony Guillory, president of the Calcasieu Parish Police Jury, said over the phone from a Lake Charles government building that was shaking from the storm.

RELATED: Louisiana girl, 14, died when tree fell on her home during Hurricane Laura

Later Thursday, Laura had weakened to a tropical storm headed toward Arkansas. More than 700,000 people in Louisiana and Texas were without power Thursday afternoon, according to the website PowerOutage.Us, which tracks utility reports.