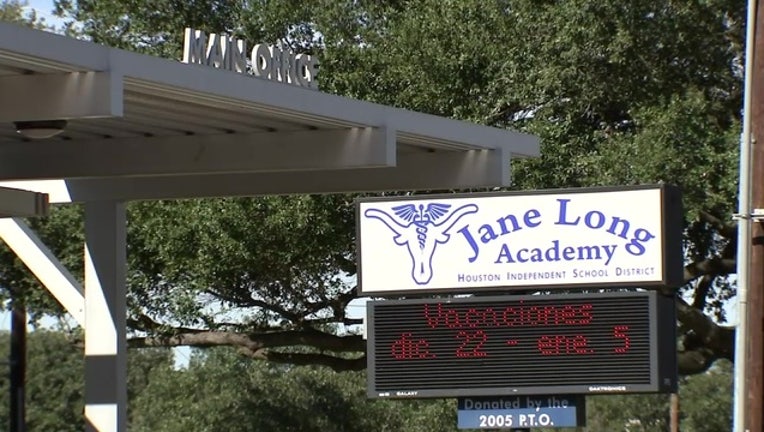 HOUSTON (FOX 26) - A Houston Independent School District middle school student is threatened by a boy with a gun at school and the student's mom claims something even more disturbing happened at Jane Long Academy.

Houston ISD confirms a student was found with a loaded handgun at Jane Long Intermediate on Thursday. A 7th grade female student says before the gun was discovered, the boy with the gun threatened her and she says a school employee ignored her pleas for help.

"We discovered a 7th grade student brought a loaded .38 caliber handgun to school in his backpack," is just a portion of the audio message from Jane Long Academy's principal. Before that was sent to parents all over Houston, Janina Beyan received a personal phone call.

Beyan says she was informed her daughter Amira was threatened by a boy with a gun at school after her daughter and a friend learned the boy had a gun in the lunchroom and she announced her disapproval.

"I told him it wasn’t smart to have the gun," explains Jane Long 7th grade student Amira.

"He became upset because she said that, told her to shut up and that he was going to shoot both of them," explains Beyan.

"I was kind of nervous because I didn’t know what exactly he was going to do at that point," adds Nelms. The Jane Long 7th grade student says others of her peers had gathered around and began instigating a fight as she and the boy with the gun exchanged words.

The 13-year-old girl says she was shocked as a school employee began yelling at her, telling her she was in trouble.  She says the worker ignored her when she told him a student had a gun.

"He was saying I wasn’t listening to him but he wasn’t listening to me," says Amira. "I told him he (a student) had a gun and he said he was going to shoot me but he (the school employee) said he couldn’t do anything about him having a gun.  (And he took you to the office saying you were going to be disciplined?)  Yes.  It was kind of disappointing because I was looking for him to help me," explains the 13-year-old girl.

Amira says the boy was free to go and she was taken to the office where the principal immediately acted when she was told a student had a gun.

In that recorded message to parents, the Jane Long principal says, "Thankfully a student alerted school staff. We searched the student and found the gun in his backpack. We immediately notified HISD police, detained the student and confiscated the weapon. The student faces charges to be determined by the District Attorney’s Office."

"Only thing she did was save lives if you ask me. She was a hero, the principal said she was a hero," says Beyan through tears.

The concerned mother says having her daughter threatened with a gun at school and an employee allegedly ignoring the threat is even more concerning when you consider this. Saturday is the third anniversary of her son Ronald’s death. Ronald died when he was 15 years old of a rare intestinal disease. "I could be making arrangements for my daughter and not have any children".

The student’s quick thinking allowed the district to take immediate action to ensure the safety of all the students at Long Academy.  Upon receiving the report, district administrators conducted interviews and a targeted search of backpacks.  District Administrators were able to locate and confiscate the weapon without incident. The district is investigating the student complaint about the manner in which the initial report was handled. HISD takes these situations very seriously, as the safety of students and staff is always the district’s top priority.