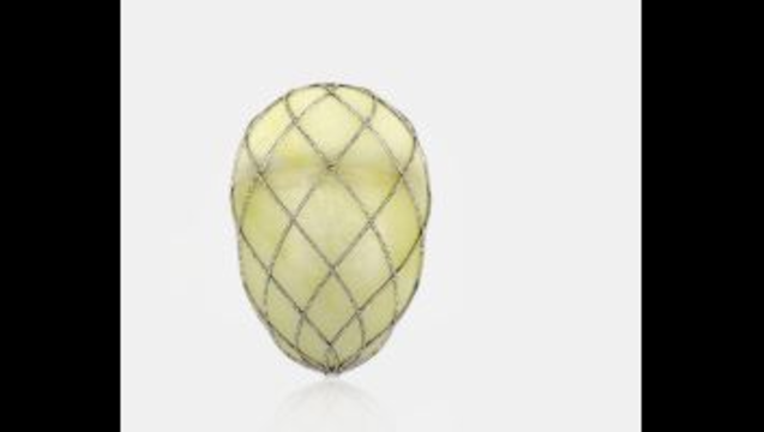 DALLAS (AP) - A Faberge egg and the jeweled elephant designed to fit inside it are being reunited for the first time in almost a century thanks to a loan from Queen Elizabeth II to a Texas museum.

A gallery that opens Monday at the Houston Museum of Natural Science features the elephant, which only recently was discovered to be the egg's missing "surprise."

"It's a really good opportunity to see the two together and marvel at Faberge's workmanship," said Caroline de Guitaut, a curator at the Royal Collection Trust.

De Guitaut announced in 2015 that she'd discovered that the small elephant in the queen's collection was created by famed Russian artisan Peter Carl Faberge.

"It had been sitting there in many ways in plain sight, minding its own business in a display case," she said.

The Imperial Diamond Trellis Egg, originally an Easter gift from Russian czar Alexander III to his wife in 1892, belongs to a Houston couple whose private collection of items created by Faberge is housed at the Houston Museum of Natural Science.

The reunited pieces will be displayed in a new gallery showcasing more than 600 Faberge items from Dorothy and Artie McFerrin that have been part of the museum for several years.

Joel Bartsch, president of the Houston museum, said the elephant will remain on display there for a year before returning to England.

De Guitaut said the elephant caught her eye because it seemed to match the published description of the missing elephant. Upon careful examination, she eventually figured out that the tower on the elephant's back had a lid and found the Faberge mark on the inside rim.

"I did feel quite sort of giddy, kind of dizzy and a little bit faint," de Guitaut said.

She said the two items were believed to have last been together when the Russian government sold them around 1922.

De Guitaut said the elephant, which walks and moves its head when wound, was purchased in 1935 by King George V, apparently with no knowledge that it was Faberge.

She said Faberge only made 50 eggs for the Russian royal family as Easter gifts; only 43 are known to survive.