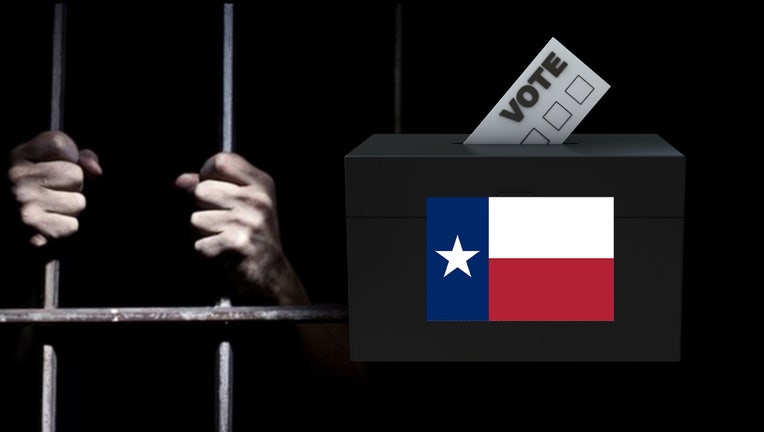 HOUSTON - As the battle wages on between lawmakers and voting rights, residents may be overwhelmed with the discussions and wondering how it will all affect them. However, for those who have paid their debt to society, it’s arguably even more puzzling as some may not even know they are eligible to vote in the first place.

Similarly, "voter fraud" has become one of the largest buzzwords among debates surrounding the new voting bill, which is considered one of the most controversial in Gov. Greg Abbott's special legislative session. Democrats criticized the bill saying it borders on voter suppression, as it affects people of color and those with disabilities. While Republicans, on the other hand, argue it supports election integrity and limits the chances of voter fraud.

Texas lawmakers are considering a controversial election reform law that has triggered most of the Democrats to fly out of the state in protest. FOX 26's Greg Groogan has more on the developing story.

Therefore, it begs the question of what does voter fraud look like and how does it happen? In Houston for example, a resident made headlines for allegedly committing voter fraud because he was a previously convicted felon.

An Example of Voter Fraud?

Hervis Rogers, 62, was arrested in early July for reportedly voting illegally in two previous elections in Nov. 2018 and March 2020, respectively. Rogers gained national attention following an interview when he and several other voters were standing in line for more than six hours at Texas Southern University to vote.

Rogers was just a few months short of his parole ending, but because of this violation, he was placed back behind bars at a bond set at $100,000.

FOX 26 Reporter Matthew Seedorff has more on the man who is now behind bars.

Regardless, Rogers’ case warrants a deeper look into "voting rights for previously convicted individuals" and into "voter fraud" and whether they are, at least in this particular instance, mutually exclusive or not. To learn more, we turned to two legal experts and a voting rights activist.

What the experts say

According to state law, an individual who has been previously convicted is eligible to vote if they have: "fully discharged the person's sentence, including any term of incarceration, parole, or supervision, or completed a period of probation ordered by any court; or (B)  been pardoned or otherwise released from the resulting disability to vote."

RELATED: Voter integrity or suppression, depends on what side your on - What's Your Point

One of the experts, Dr. Gerald Horne, a professor of History and African American Studies at the University of Houston, and who also has exceptional experience as a lawyer, spoke on the importance of having previously convicted individuals voting, saying it was vital in furthering their transition back into society.

"You oftentimes hear the phrase, ‘paying your debt to society.’ And I think that if you've paid your debt to society by serving time in prison, then you should have an opportunity to then participate in the reconstruction of society," he explained. "It seems to me that would serve the public policy of reducing alienation of previously convicted felons, presumably it would also cut down on recidivism, that is to say, the possibility that a felon would commit another crime sending that person back to prison.

"In other words, I had thought that the purpose of imprisonment was rehabilitation, not punishment forevermore."

To learn more about voting rights for previously convicted felons, we turned to Dr. Gerald Horne, who holds e holds the Moores Professorship of History and African American Studies at the University of Houston and a law degree from UC Berkeley.

Another legal expert and editor/publisher for Texas Conservative Review, Gary Polland, mirrored Dr. Horne’s sentiments but said Texas is responsible for informing its residents to prepare them once they are back into society.

"You've heard people say, ‘ignorance of the law is no excuse.’ That is true. However, it does put it in context," Polland said. "You know, like, ‘I didn't intentionally try to violate the law,’ but my understanding was, that once you get released from prison, your civil rights are automatically restored. We have an obligation in this state, to inform people and give them the information they need, so they don't make these mistakes."

We're learning more about voting rights for previously convicted, so we turned to Gary Polland, a local attorney and editor/publisher for Texas Conservative Review.

Additionally, Polland says he empathizes with Rogers’ misfortune and perhaps didn’t know he was breaking the law when he voted. This is exactly why, he argues, it’s important for the state to provide necessary resources for previously convicted individuals to get properly educated.

"When [Rogers] gets released from prison, he should have been given a memo that says here are your rights," Polland explained. "And [returning citizens] need to get a list of what they can't do and what they can do, so they're not in a situation where they're guessing."

How does it affect Texans?

These claims were further emphasized by Savannah Eldridge, a voting rights activist and founder of Be Frank 4 Justice, a nonprofit that focuses on educating incarcerated individuals on their legal rights. According to Eldrige though, it does not help that Texas already has strict voting rules, to begin with.

"There are three states where you can vote no matter what...but Texas is one of the hardest states to exercise your voting rights," she said. "Therefore, there should be more processes in place to make sure that people understand how to do that, no matter what their situation or circumstances."

To learn about voting rights for previously convicted individuals, FOX 26 caught up with Savannah Eldridge, a local nurse and founder of Be Frank 4 Justice, a non-profit aimed at educating those incarcerated with legal support.

Rogers’ case is unique certainly, in that according to Polland, it’s quite uncommon previously convicted individuals would list "voting" among their top priorities.

"I don't think they're paying attention to voting, thinking about how to vote, or think that they're going to violate the law so they could vote," he said. "I think when they get out of prison, they're worried about trying to get their life back together and trying to stay out of prison in the future."

"Hervis is a felon rightly barred from voting under TX [sic] law," he said on Twitter. "I prosecute voter fraud everywhere we find it!"

However, some critics have condemned the Attorney General’s statements - citing racial implications behind prosecuting Rogers.

"Republicans are trying to use this as justification to create a horrible voting bill," Rep. Jarvis Johnson (D) District 139 told FOX 26 in July. "We don’t place a $100,000 bond on rapists. This in itself is a travesty. It is what the Republican party continues to do, to try and make examples of Black people simply exercising their right to vote."

"If this was the best Mr. Paxton can do with regard to voter fraud, it reveals and exposes he has a very thin case to make," he said.

He also had a grave reminder about the attorney general’s own situation.

"He's being investigated by the FBI. And also, if I'm not mistaken, he still has securities violations hanging over his head," Dr. Horne said. "So I would urge Mr. Paxton to look down the road and recognize that sooner, rather than later, he may become a convicted felon himself. And he might want the rules to be changed with regard to felons voting as a result."

The future of voting

Rogers’ case becomes more complicated though after learning he was registered to vote, despite being a few months short of his parole ending. For this reason, it begs the question of how Rogers can be held accountable if he was voting illegally and consequently, if it may deter others from voting.

"For me, what it shows is that people are not being prepared to come back into society," Eldrige said. "If voting was going to put this person at risk to go back, and they've already been working to try to stay on the right path, I just do not believe you know, that anybody would race back to vote, especially three months shy of having that opportunity."

Legal experts, on the other hand, say voters should be encouraged more than ever to participate in the democratic process.

"It's the perfect reason why you should vote," Polland exclaimed. "And it's critical that especially informed voters go to the polls and vote. I mean, who we elect to Office makes a difference, especially in local elections, it affects the quality of our lives."

"I would say being Black in the United States involves an uphill climb and voting, the way it is constructed, and Texas is an exemplar of what I'm discussing," Dr. Horne concluded. "But just like our ancestors were not necessarily stopped from the struggle by dint of being enslaved, I don't think that we should be stopped from voting by dint of the fact that you have an attorney general, who was looking to add another scout to his belt and distract the tension from his multiple legal and political problems."